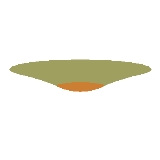 Encyclopedia
In metric theories of gravitation, particularly general relativity
General relativity
General relativity or the general theory of relativity is the geometric theory of gravitation published by Albert Einstein in 1916. It is the current description of gravitation in modern physics...
, a static spherically symmetric perfect fluid solution (a term which is often abbreviated as ssspf) is a spacetime
Spacetime
In physics, spacetime is any mathematical model that combines space and time into a single continuum. Spacetime is usually interpreted with space as being three-dimensional and time playing the role of a fourth dimension that is of a different sort from the spatial dimensions...
equipped with suitable tensor field
Tensor field
In mathematics, physics and engineering, a tensor field assigns a tensor to each point of a mathematical space . Tensor fields are used in differential geometry, algebraic geometry, general relativity, in the analysis of stress and strain in materials, and in numerous applications in the physical...
s which models a static round ball of a fluid with isotropic pressure
Pressure
Pressure is the force per unit area applied in a direction perpendicular to the surface of an object. Gauge pressure is the pressure relative to the local atmospheric or ambient pressure.- Definition :...
.

Such solutions are often used as idealized models of star
Star
A star is a massive, luminous sphere of plasma held together by gravity. At the end of its lifetime, a star can also contain a proportion of degenerate matter. The nearest star to Earth is the Sun, which is the source of most of the energy on Earth...
s, especially compact objects such as white dwarf
White dwarf
A white dwarf, also called a degenerate dwarf, is a small star composed mostly of electron-degenerate matter. They are very dense; a white dwarf's mass is comparable to that of the Sun and its volume is comparable to that of the Earth. Its faint luminosity comes from the emission of stored...
s and especially neutron star
Neutron star
A neutron star is a type of stellar remnant that can result from the gravitational collapse of a massive star during a Type II, Type Ib or Type Ic supernova event. Such stars are composed almost entirely of neutrons, which are subatomic particles without electrical charge and with a slightly larger...
s. In general relativity, a model of an isolated star (or other fluid ball) generally consists of a fluid-filled interior region, which is technically a perfect fluid
Fluid solution
In general relativity, a fluid solution is an exact solution of the Einstein field equation in which the gravitational field is produced entirely by the mass, momentum, and stress density of a fluid....
solution of the Einstein field equation, and an exterior region, which is an asymptotically flat vacuum solution
Vacuum solution (general relativity)
In general relativity, a vacuum solution is a Lorentzian manifold whose Einstein tensor vanishes identically. According to the Einstein field equation, this means that the stress-energy tensor also vanishes identically, so that no matter or non-gravitational fields are present.More generally, a...
. These two pieces must be carefully matched across the world sheet of a spherical surface, the surface of zero pressure. (There are various mathematical criteria called matching conditions for checking that the required matching has been successfully achieved.) Similar statements hold for other metric theories of gravitation, such as the Brans-Dicke theory
Brans-Dicke theory
In theoretical physics, the Brans–Dicke theory of gravitation is a theoretical framework to explain gravitation. It is a well-known competitor of Einstein's more popular theory of general relativity...
.

In this article, we will focus on the construction of exact ssspf solutions in our current Gold Standard theory of gravitation, the theory of general relativity. To anticipate, the figure at right depicts (by means of an embedding diagram) the spatial geometry of a simple example of a stellar model in general relativity. The euclidean space in which this two-dimensional Riemannian manifold (standing in for a three-dimensional Riemannian manifold) is embedded has no physical significance, it is merely a visual aid to help convey a quick impression of the kind of geometrical features we will we encounter.

We list here a few milestones in the history of exact ssspf solutions in general relativity: