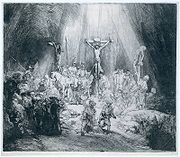 A state, in printmaking
Printmaking
Printmaking is the process of making artworks by printing, normally on paper. Printmaking normally covers only the process of creating prints with an element of originality, rather than just being a photographic reproduction of a painting. Except in the case of monotyping, the process is capable...
, is a different form of a print, caused by a deliberate and permanent change to a matrix such as a copper plate (for engraving
Engraving
Engraving is the practice of incising a design on to a hard, usually flat surface, by cutting grooves into it. The result may be a decorated object in itself, as when silver, gold, steel, or glass are engraved, or may provide an intaglio printing plate, of copper or another metal, for printing...
s etc) or woodblock (for woodcut
Woodcut
Woodcut—occasionally known as xylography—is a relief printing artistic technique in printmaking in which an image is carved into the surface of a block of wood, with the printing parts remaining level with the surface while the non-printing parts are removed, typically with gouges...
).

Artists often take prints from a plate (or block, etc.) and then do further work on the plate before printing more impressions (copies). Sometimes two states may be printed on the same day, sometimes several years may elapse between them.

States are usually numbered in Roman numerals: I, II, III... , and often as e.g.: "I/III", to indicate the first of three recorded states. Some recent scholars refine the work of their predecessors, without wishing to create a confusing new numbering, by identifying states like "IIa","IVb" and so forth. A print with no different states known is catalogued as "only state".

Most authorities do not count accidental damage to a plate – usually scratches on a metal plate or cracks in a woodcut block – as constituting different states, partly because scratches can disappear again after being printed a number of times.

The definition of states mostly goes back to Adam von Bartsch, the great cataloguer of old master print
Old master print
An old master print is a work of art produced by a printing process within the Western tradition . A date of about 1830 is usually taken as marking the end of the period whose prints are covered by this term. The main techniques concerned are woodcut, engraving and etching, although there are...
s. A great deal of work was done by art historians during the 19th and early 20th centuries, and most non-contemporary printmakers now have all the states of their prints catalogued. To discover a new or unrecorded state of an old master print is therefore now rare, although it was only in 1967, after it was sold to Cleveland, that it was realised that what had long been famous as the best impression of the highly important print, the Battle of the Nudes
Battle of the Nudes (engraving)
The Battle of the Nudes or Battle of the Naked Men, probably dating from 1465–1475, is an engraving by the Florentine goldsmith and sculptor Antonio del Pollaiuolo which is one of the most significant old master prints of the Italian Renaissance...
by Antonio del Pollaiuolo (1465-75) was the unique surviving impression of a previously unrecognised first state. This is especially surprising as the whole plate was extensively reworked between the two, apparently to renew it after it was worn from printing.

In modern prints, a distinction is made between proof states or working proofs, which are produced before the print is regarded as finished, and other states. This is usually possible because modern prints are issued in edition
Edition
In printmaking, an edition is a number of prints struck from one plate, usually at the same time. This is the meaning covered by this article...
s, usually signed and numbered. In the case of old master prints, before about 1830, this was not usually the case, and proof state is only used when the print is clearly half-finished, as with two impressions of Albrecht Dürer
Albrecht Dürer
Albrecht Dürer was a German painter, printmaker, engraver, mathematician, and theorist from Nuremberg. His prints established his reputation across Europe when he was still in his twenties, and he has been conventionally regarded as the greatest artist of the Northern Renaissance ever since...
's Adam and Eve in the British Museum
British Museum
The British Museum is a museum of human history and culture in London. Its collections, which number more than seven million objects, are amongst the largest and most comprehensive in the world and originate from all continents, illustrating and documenting the story of human culture from its...
and the Albertina
Albertina, Vienna
The Albertina is a museum in the Innere Stadt of Vienna, Austria. It houses one of the largest and most important print rooms in the world with approximately 65,000 drawings and approximately 1 million old master prints, as well as more modern graphic works, photographs and architectural drawings...
in Vienna. However, most "artist's proofs" are impressions of the main state which are not counted in the main limited edition numbers, and are taken by the artist; they are therefore from the same state as the main edition.

For example, unlike Dürer, for whom relatively few different states survive, Rembrandt prints have often survived in multiple states (up to eleven). It is clear that many of the earlier states are working proofs, made to confirm how the printed image was developing, but it is impossible to draw a confident line between these and other states that Rembrandt may well have regarded as finished at the point he printed them. Rembrandt is one of the most prolific creator of states, and also reworked plates after leaving them for some years.

New states in old master prints are often caused by the adding of inscriptions (signatures, dedications, publishers details, even a price) inside or below the image. Except for signatures, these would often not be added by the artist himself. A wholesale example is Daniel Hopfer
Daniel Hopfer
Daniel Hopfer was a German artist who is widely believed to have been the first to use etching in printmaking, at the end of the fifteenth century...
, the inventor of etching
Etching
Etching is the process of using strong acid or mordant to cut into the unprotected parts of a metal surface to create a design in intaglio in the metal...
as a printmaking technique (in c1500), and other members of his family. In the late 17th century, a distant relative of the Hopfers, David Funck , acquired 230 of the Hopfers' iron plates, and reprinted these under the title Operae Hopferianae, adding a somewhat crudely scratched number, known as the Funck number, to each one, thus creating a second state of the hitherto unretouched plates.

Sometimes another artist may add to a plate, or a (usually) anonymous artist or craftsman would rework a plate which has become worn out by printing. This has now been done to most surviving plates by Rembrandt (often more than once) and many by Goya
Francisco Goya
Francisco José de Goya y Lucientes was a Spanish romantic painter and printmaker regarded both as the last of the Old Masters and the first of the moderns. Goya was a court painter to the Spanish Crown, and through his works was both a commentator on and chronicler of his era...
, Martin Schongauer
Martin Schongauer
Martin Schongauer was a German engraver and painter. He was the most important German printmaker before Albrecht Dürer....
and others.

When they develop a keen collector's market, artists have often exploited this by creating extra states. This trend can be seen in, among others, the English mezzotint
Mezzotint
Mezzotint is a printmaking process of the intaglio family, technically a drypoint method. It was the first tonal method to be used, enabling half-tones to be produced without using line- or dot-based techniques like hatching, cross-hatching or stipple...
ers of the late 18th century ("before lettering" states were their speciality) and Sir David Young Cameron
David Young Cameron
Sir David Young Cameron was a Scottish painter and etcher.-Biography:Cameron was the son of the Rev. Robert Cameron and was born in Glasgow, Scotland. From around 1881 he studied at the Glasgow School of Art and in 1885 enrolled at the Edinburgh Schools of Art...
in the early 20th century (his record was a rather absurd twenty-eight states).

A similar use of "state" is in book collecting
Book collecting
Book collecting is the collecting of books, including seeking, locating, acquiring, organizing, cataloging, displaying, storing, and maintaining whatever books are of interest to a given individual collector. The love of books is bibliophilia, and someone who loves to read, admire, and collect...
, where a particular page may be reset for some reason in the course of printing.