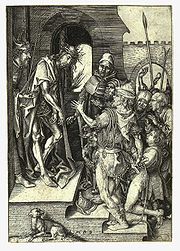 Martin Schongauer was a German
Germans
The Germans are a Germanic ethnic group native to Central Europe. The English term Germans has referred to the German-speaking population of the Holy Roman Empire since the Late Middle Ages....
engraver and painter
Painting
Painting is the practice of applying paint, pigment, color or other medium to a surface . The application of the medium is commonly applied to the base with a brush but other objects can be used. In art, the term painting describes both the act and the result of the action. However, painting is...
. He was the most important German printmaker before Albrecht Dürer
Albrecht Dürer
Albrecht Dürer was a German painter, printmaker, engraver, mathematician, and theorist from Nuremberg. His prints established his reputation across Europe when he was still in his twenties, and he has been conventionally regarded as the greatest artist of the Northern Renaissance ever since...
.

His prints were circulated widely and Schongauer was known in Italy by the names Bellendo Martino and Martino d'Anversa.

His father was a goldsmith
Goldsmith
A goldsmith is a metalworker who specializes in working with gold and other precious metals. Since ancient times the techniques of a goldsmith have evolved very little in order to produce items of jewelry of quality standards. In modern times actual goldsmiths are rare...
named Henry, a native of Augsburg
Augsburg
Augsburg is a city in the south-west of Bavaria, Germany. It is a university town and home of the Regierungsbezirk Schwaben and the Bezirk Schwaben. Augsburg is an urban district and home to the institutions of the Landkreis Augsburg. It is, as of 2008, the third-largest city in Bavaria with a...
, who had settled at Colmar
Colmar
Colmar is a commune in the Haut-Rhin department in Alsace in north-eastern France.It is the capital of the department. Colmar is also the seat of the highest jurisdiction in Alsace, the appellate court....
, where the chief part of Martin's life was spent. He may well have been trained by Master E. S.
Master E. S.
Master E. S. , is an unidentified German engraver, goldsmith, and printmaker of the late Gothic period. He was the first major German artist of old master prints and was greatly copied and imitated. The name assigned to him by art historians, Master E. S., is derived from the monogram, E...
; A. Hyatt Mayor
A. Hyatt Mayor
A. Hyatt Mayor was an American art historian and curator at the Metropolitan Museum of Art, a leading figure in the study of prints, both old master prints and popular prints....
saw both their styles in different parts of one engraving, and all the works with Schongauer's M†S monogram show a fully developed style. Schongauer established at Colmar a very important school of engraving, out of which grew the "Little Masters
Little Masters
The Little Masters , were a group of German printmakers who worked in the first half of the 16th century, primarily in engraving. They specialized in very small finely detailed prints, some no larger than a postage stamp...
" of the succeeding generation, and a large group of Nuremberg
Nuremberg
Nuremberg[p] is a city in the German state of Bavaria, in the administrative region of Middle Franconia. Situated on the Pegnitz river and the Rhine–Main–Danube Canal, it is located about north of Munich and is Franconia's largest city. The population is 505,664...
artists.

As a painter, Schongauer was a follower of the Flemish Rogier van der Weyden, and his rare existing pictures closely resemble, both in splendour of color and exquisite minuteness of execution, the best works of contemporary art in Flanders
Flanders
Flanders is the community of the Flemings but also one of the institutions in Belgium, and a geographical region located in parts of present-day Belgium, France and the Netherlands. "Flanders" can also refer to the northern part of Belgium that contains Brussels, Bruges, Ghent and Antwerp...
.
Among the very few paintings which can with certainty be attributed to him, the chief is a magnificent altar-piece in the church of Saint Martin at Colmar. The Musée d´Unterlinden in Colmar possesses eleven panels by him, and a small panel of David with Goliath's Head in the Munich Gallery is attributed to him. The miniature painting of the Death of the Virgin in the National Gallery, London
National Gallery, London
The National Gallery is an art museum on Trafalgar Square, London, United Kingdom. Founded in 1824, it houses a collection of over 2,300 paintings dating from the mid-13th century to 1900. The gallery is an exempt charity, and a non-departmental public body of the Department for Culture, Media...
is probably the work of some pupil. In 1488 Schongauer died at Colmar, according to the register of Saint Martin Church. Other authorities state that his death occurred in 1491.

The main work of Schongauer's life was the production of a large number of beautiful engravings, which were largely sold, not only in Germany, but also in Italy and even in England and Spain. Vasari
Giorgio Vasari
Giorgio Vasari was an Italian painter, writer, historian, and architect, who is famous today for his biographies of Italian artists, considered the ideological foundation of art-historical writing.-Biography:...
says that Michelangelo
Michelangelo
Michelangelo di Lodovico Buonarroti Simoni , commonly known as Michelangelo, was an Italian Renaissance painter, sculptor, architect, poet, and engineer who exerted an unparalleled influence on the development of Western art...
copied one of his engravings, in the Trial of Saint Anthony
The Torment of Saint Anthony (Michelangelo)
The Torment of Saint Anthony is the earliest known painting by Michelangelo, painted after an engraving by Martin Schongauer when he was only 12 or 13 years old. It is currently in the permanent collection of the Kimbell Art Museum in Fort Worth, Texas...
. His style shows no trace of Italian influence, but a very clear and organised Gothic
Gothic art
Gothic art was a Medieval art movement that developed in France out of Romanesque art in the mid-12th century, led by the concurrent development of Gothic architecture. It spread to all of Western Europe, but took over art more completely north of the Alps, never quite effacing more classical...
.

His subjects are mainly religious, but include comic scenes of ordinary life such as the Peasant family going to market or the Two apprentices fighting. One hundred and sixteen engravings are generally recognised as by his hand, and since several are only known from a single impression, there were probably others that are now lost. Many of his pupils' plates as well as his own are signed, M†S, as are many copies probably by artists with no connection to him.
Among the most renowned of Schongauer's engravings are the series of the Passion and the Death and Coronation of the Virgin, and the series of the Wise and Foolish Virgins. All are remarkable for their miniature-like treatment, their brilliant touch, and their chromatic
Chromaticity
Chromaticity is an objective specification of the quality of a color regardless of its luminance, that is, as determined by its hue and colorfulness ....
force. Some, such as the Death of the Virgin and the Adoration of the Magi are richly-filled compositions of many figures, treated with much largeness of style in spite of their minute scale.

He established the system of depicting volume by means of cross-hatching (lines in two directions) which was further developed by Dürer
Albrecht Dürer
Albrecht Dürer was a German painter, printmaker, engraver, mathematician, and theorist from Nuremberg. His prints established his reputation across Europe when he was still in his twenties, and he has been conventionally regarded as the greatest artist of the Northern Renaissance ever since...
, and was the first engraver to curve parallel lines, probably by rotating the plate against a steady burin
Burin
Burin from the French burin meaning "cold chisel" has two specialised meanings for types of tools in English, one meaning a steel cutting tool which is the essential tool of engraving, and the other, in archaeology, meaning a special type of lithic flake with a chisel-like edge which was probably...
. He also developed a burin technique producing deeper lines on the plate, which meant that more impressions could be taken before the plate became worn.

The British Museum
British Museum
The British Museum is a museum of human history and culture in London. Its collections, which number more than seven million objects, are amongst the largest and most comprehensive in the world and originate from all continents, illustrating and documenting the story of human culture from its...
and other major print room
Print room
A print room is either a room or industrial building where printing takes place, or a room in an art gallery or museum, where a collection of old master and modern prints, usually together with drawings, watercolours and photographs, are held and viewed. The latter meaning is the subject of this...
s possess fine collections of Schongauer's prints.