Encyclopedia
Starch gelatinization is a process that breaks down the intermolecular bonds of starch
Starch
Starch or amylum is a carbohydrate consisting of a large number of glucose units joined together by glycosidic bonds. This polysaccharide is produced by all green plants as an energy store...
molecules in the presence of water
Water
Water is a chemical substance with the chemical formula H2O. A water molecule contains one oxygen and two hydrogen atoms connected by covalent bonds. Water is a liquid at ambient conditions, but it often co-exists on Earth with its solid state, ice, and gaseous state . Water also exists in a...
and heat, allowing the hydrogen bond
Hydrogen bond
A hydrogen bond is the attractive interaction of a hydrogen atom with an electronegative atom, such as nitrogen, oxygen or fluorine, that comes from another molecule or chemical group. The hydrogen must be covalently bonded to another electronegative atom to create the bond...
ing sites (the hydroxyl hydrogen and oxygen) to engage more water. This irreversibly dissolves the starch granule
Granule (cell biology)
In cell biology, a granule is a small particle. It can be any structure barely visible by light microscopy. The term is most often used to describe a secretory vesicle.-Leukocytes:...
. Penetration of water increases randomness in the general granule structure and decreases the number and size of crystal
Crystal
A crystal or crystalline solid is a solid material whose constituent atoms, molecules, or ions are arranged in an orderly repeating pattern extending in all three spatial dimensions. The scientific study of crystals and crystal formation is known as crystallography...
line regions. Crystalline regions do not allow water entry. Heat causes such regions to become diffuse, so that the chains begin to separate into an amorphous form. Under the microscope in polarized light starch loses its birefringence
Birefringence
Birefringence, or double refraction, is the decomposition of a ray of light into two rays when it passes through certain anisotropic materials, such as crystals of calcite or boron nitride. The effect was first described by the Danish scientist Rasmus Bartholin in 1669, who saw it in calcite...
and its extinction cross
Extinction cross
The extinction cross is an optical phenomenon that is seen when trying to extinguish a laser beam or non-planar white light using crossed polarizers. Ideally, crossed polarizers block all light, since light which is polarized along the polarization axis of the first polarizer is perpendicular to...
. This process is used in cooking to make roux sauce
The gelatinization temperature of starch depends upon plant type and the amount of water present, pH
PH
In chemistry, pH is a measure of the acidity or basicity of an aqueous solution. Pure water is said to be neutral, with a pH close to 7.0 at . Solutions with a pH less than 7 are said to be acidic and solutions with a pH greater than 7 are basic or alkaline...
, types and concentration of salt, sugar, fat and protein in the recipe, as well as derivatisation technology used. Some type of unmodified native starches start swelling at 55 °C, other types at 85 °C. The gelatinization temperature depends on the degree of cross-linking of the amylopectin
Amylopectin
Amylopectin is a soluble polysaccharide and highly branched polymer of glucose found in plants. It is one of the two components of starch, the other being amylose.Glucose units are linked in a linear way with α glycosidic bonds...
, and can be modified by genetic manipulation of starch synthase
Starch synthase
In enzymology, a starch synthase is an enzyme that catalyzes the chemical reactionThus, the two substrates of this enzyme are ADP-glucose and a chain of D-glucose residues joined by 1,4-alpha-glycosidic bonds, whereas its two products are ADP and an elongated chain of glucose residues...
genes.

During gelatinization, water acts as a plasticizer
Plasticizer
Plasticizers or dispersants are additives that increase the plasticity or fluidity of the material to which they are added; these include plastics, cement, concrete, wallboard, and clay. Although the same compounds are often used for both plastics and concretes the desired effects and results are...
. Water is first absorbed in the amorphous space of starch, which leads to a swelling phenomenon during heating and then transmitted through connecting molecules to crystalline regions. Water enters enters tightly bound amorphous regions of double helical structures to swell amylopectin, thus causing crystalline structures to melt and break free.. Stress caused by this swelling phenomenon eventually interrupts structure organization and allows for leaching of amylose molecules to surrounding water.

Gelatinization temperature also depends on the amount of damaged starch granules. These will swell faster. Damaged starch can be produced, for example, during the wheat milling process, or when drying the starch cake in the starch plant.

Gelatinization improves the availability of starch for amylase hydrolysis.

Due to strong associations of hydrogen bonding, longer amylose molecules will form a stiff gel. Amylopectin molecules with longer branched structure, increases the tendency to form strong gels. Granule size do not directly impact starch performance, but it is one of the main factors affecting starch gelatinzation and retrogradation. High amylopectin starches will have a stable gel, but will be more softer than high amylose gels.

Retrogradation restricts the availability for amylase hydrolysis to occur.

Pregelatinized starch is starch cooked and then dried in the starch factory on a drum dryer
Drum drying
Drum drying is a method used for drying out liquids; for example, milk is applied as a thin film to the surface of a heated drum, and the dried milk solids are then scraped off with a knife...
or in an extruder
Extrusion
Extrusion is a process used to create objects of a fixed cross-sectional profile. A material is pushed or drawn through a die of the desired cross-section...
making the starch cold water soluble.

A simple technique to study starch gelation is by using a Barbender Viscoamylograph. It is a common technique used by food industries to determine the pasting temperature, swelling capacity, shear/thermal stability and the extent of retrogradation.
Under controlled conditions, starch and distilled water is heated at a constant heating rate in a rotating bowl and then cooled down. The viscosity of the mixture deflects a measuring sensor in the bowl. This deflection is measured as viscosity in torque over time vs. temperature, and recorded on the computer.
The viscoamylograph provides the audience with the Beginning of gelatinization, gelatinization maximum, gelatinization temperature, viscosity during holding, and viscosity at the end of cooling.
DSC or Differential scanning calorimetry
Differential scanning calorimetry
Differential scanning calorimetry or DSC is a thermoanalytical technique in which the difference in the amount of heat required to increase the temperature of a sample and reference is measured as a function of temperature. Both the sample and reference are maintained at nearly the same temperature...
is another methods industries use to examine properties of gelatinized starch. As water is heated with starch granules, gelatinization occurs, involving an endothermic. reaction. 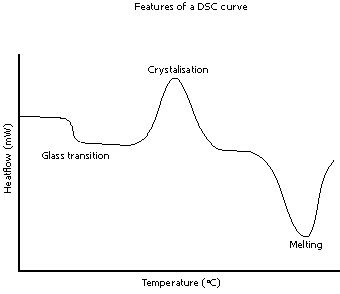 The initiation of gelatinization is called the T-onset.
T-peak is the position where the endothermic reaction occurs at the maximum.
T-conclusion is when all the starch granules are fully gelatinized, and the curve remains stable.