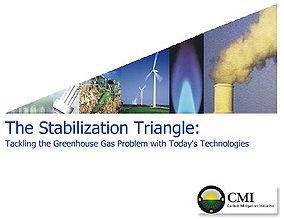 The Stabilization Wedge Game, or what is commonly referred to as simply the 'Wedge Game', is a serious game
Serious game
A serious game is a game designed for a primary purpose other than pure entertainment. The "serious" adjective is generally prepended to refer to products used by industries like defense, education, scientific exploration, health care, emergency management, city planning, engineering, religion,...
produced by Princeton University's
Princeton University
Princeton University is a private research university located in Princeton, New Jersey, United States. The school is one of the eight universities of the Ivy League, and is one of the nine Colonial Colleges founded before the American Revolution....
Carbon Mitigation Initiative. The goal of the game creators, Stephen Pacala and Robert H. Socolow, is to demonstrate through this game that global warming is a problem which can be solved by implementing today's technologies to reduce emissions. The object of the game is to stabilize concentrations under 500ppm for the next fifty years, using seven wedges from a variety of different strategies which fit into the stabilization triangle. Updated estimates indicate that 18-25 wedges are necessary to achieve the goal, given the higher rates of emission growth that have occurred since the original study, even if no new sources were added beginning in 2010.

Emissions of  and other greenhouse gases have been increasing ever since the Industrial Revolution
Industrial Revolution
The Industrial Revolution was a period from the 18th to the 19th century where major changes in agriculture, manufacturing, mining, transportation, and technology had a profound effect on the social, economic and cultural conditions of the times...
, and if the world continues business as usual, emissions will double by 2055. To prevent the worst consequences of global warming
Global warming
Global warming refers to the rising average temperature of Earth's atmosphere and oceans and its projected continuation. In the last 100 years, Earth's average surface temperature increased by about with about two thirds of the increase occurring over just the last three decades...
, scientists recommend freezing and reducing net global emissions immediately.

If global emissions of are graphed for the next 50 years, the difference between the business as usual scenario and the flat path forms a triangle. This triangle is known as the stabilization triangle. Pacala and Socolow divided this hypothetical triangle into seven stabilization wedges, which represent different measures that must be taken to reduce emissions. When speaking of different strategies to reduce emissions, the language "to reduce one wedge's worth," is often employed, and by reducing the stabilization wedge of fourteen gigatons of into seven wedges, the task is much easier to conceptualize.

As Pacala and Socolow originally presented the wedges concept in Science
Science (journal)
Science is the academic journal of the American Association for the Advancement of Science and is one of the world's top scientific journals....
, there are fifteen different wedge strategies. Regarding the specific number, Socolow says that he and Pacala didn't include all of the possibilities, but that "It was a matter of rhetoric to stop at 15. And exhaustion. There was nothing magic about 15." On the CMI website, the same strategies are presented and expanded upon in detail, and are re-organized into four categories:

Because of the simplicity of the wedge game, it has become popular as a communication tool for global warming
Global warming
Global warming refers to the rising average temperature of Earth's atmosphere and oceans and its projected continuation. In the last 100 years, Earth's average surface temperature increased by about with about two thirds of the increase occurring over just the last three decades...
mitigation. It is used in a variety of arenas and by a variety of players including businessmen, politicians, teachers, and students. David Hawkins, climate director at the Natural Resources Defense Council, puts the ease of use of the Wedge Game this way:

The Carbon Mitigation Initiative (CMI) permits anyone to use the game and make use of their materials, provided that they share the results with CMI. Because it is so widely accessible, it has become included in certain high school curricula. The Keystone Center has deemed the Stabilization Wedge Game to fulfill the following National Education Standards: S1, S6, LA4, LA5, C4, C5, E1, G1, G5, and WH9.

The American Association for the Advancement of Science
American Association for the Advancement of Science
The American Association for the Advancement of Science is an international non-profit organization with the stated goals of promoting cooperation among scientists, defending scientific freedom, encouraging scientific responsibility, and supporting scientific education and science outreach for the...
hosted a conference for educators at the Hilton
Hilton Hotels
Hilton Hotels & Resorts is an international chain of full-service hotels and resorts founded by Conrad Hilton and now owned by Hilton Worldwide. Hilton hotels are either owned by, managed by, or franchised to independent operators by Hilton Worldwide. Hilton Hotels became the first coast-to-coast...
in San Francisco 2007-02-18. Collaborating with AAAS were the National Science Teachers Association
National Science Teachers Association
The National Science Teachers Association , founded in 1944 and headquartered in Arlington, Virginia, is an association of science teachers in the United States and is the largest organization of science teachers worldwide...
and the United Educators of San Francisco (representing the National Education Association
National Education Association
The National Education Association is the largest professional organization and largest labor union in the United States, representing public school teachers and other support personnel, faculty and staffers at colleges and universities, retired educators, and college students preparing to become...
and the American Federation of Teachers
American Federation of Teachers
The American Federation of Teachers is an American labor union founded in 1916 that represents teachers, paraprofessionals and school-related personnel; local, state and federal employees; higher education faculty and staff, and nurses and other healthcare professionals...
). Dr. Socolow and Dr. Hotinski personally presented the Stabilization Wedge concept at the event.

The Stabilization Wedge Game is also used as a centerpiece for business seminars. Business executives played the game at as seminar held by the Sustainable Enterprise Academy at York University
York University
York University is a public research university in Toronto, Ontario, Canada. It is Canada's third-largest university, Ontario's second-largest graduate school, and Canada's leading interdisciplinary university....
in Toronto
Toronto
Toronto is the provincial capital of Ontario and the largest city in Canada. It is located in Southern Ontario on the northwestern shore of Lake Ontario. A relatively modern city, Toronto's history dates back to the late-18th century, when its land was first purchased by the British monarchy from...
.

The primary critique of the Wedge Game is that it is too simple, especially regarding the economic aspect of global warming
Global warming
Global warming refers to the rising average temperature of Earth's atmosphere and oceans and its projected continuation. In the last 100 years, Earth's average surface temperature increased by about with about two thirds of the increase occurring over just the last three decades...
mitigation. The materials provided by CMI only attach one, two, or three dollar signs to each wedge as a broad estimate of the expense of each option.. James L. Connaughton
James L. Connaughton
James Laurence Connaughton is an American energy industry lawyer and the former George W. Bush administration environmental adviser...
, former chairman of the White House Council on Environmental Quality in the Bush Administration, is a critic of the Wedge Game for its oversimplicity, and he has even said that some of the numbers used by Socolow and Pacala, such as 550 ppm as a maximum allowable target for , lack a scientific basis. Richard G. Richels
Richard G. Richels
Dr. Richard "Rich" Gayle Richels directs global climate change research at the Electric Power Research Institute. Dr. Richels received a BS degree in physics from the College of William & Mary. He was awarded MS and PhD degrees in decision science from Harvard University's Division of Applied...
, a senior engineer at the Electric Power Research Institute
Electric Power Research Institute
The Electric Power Research Institute conducts research on issues related to the electric power industry in USA. EPRI is a nonprofit organization funded by the electric utility industry. EPRI is primarily a US based organization, receives international participation...
, says that the lack of economic precision in the game could create misconceptions:
Another criticism of the game is that one of the premises, i.e. that humanity already has the tools and technologies to halt climate change, is misleading. Marty Hoffert of the New York University
New York University
New York University is a private, nonsectarian research university based in New York City. NYU's main campus is situated in the Greenwich Village section of Manhattan...
Physics Department claims that while the technologies are available in a technical sense, they are not available in an operational sense, and it will take a massive mobilization to make progress. Hoffert explains:
In June 2008, Joseph Romm argued in Nature magazine that "If we are to have confidence in our ability to stabilize carbon dioxide levels below 450 p.p.m. emissions must average less than 5 GtC per year over the century. This means accelerating the deployment of the... wedges so they begin to take effect in 2015 and are completely operational in much less time than originally modelled by Socolow and Pacala."

A final criticism is that the Wedge Game focuses on technological fix
Technological fix
A technological fix or technical fix refers to an engineering or technical solution to a problem caused by human nature. Frequently the solution is an impractical and/or humorous proposal such as the Internet Protocol Evil bit or the "suitable application of high explosives" to interpersonal problems...
es rather than fundamentally challenging the endless growth economy that is at the heart of global climate change. The 2007 IPCC reports state clearly that economic and demographic growth are the fundamental drivers of global climate change. Yet of the fifteen wedges developed by Pacala and Socolow, only one—halving the number of miles driven by the world's automobile fleet—might be considered a "demand reduction" wedge. None of their wedges treat population reduction.
The source of this article is wikipedia, the free encyclopedia.  The text of this article is licensed under the GFDL.