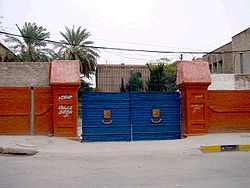 St Mary's Cambridge School is a high school situated on Murree Road
Murree Road
Murree Road , is a major road that runs from Rawalpindi to Murree in Pakistan. It has been a hot spot for various political and social events. Nala Lai, famous for its floods, is located along the road in Rawalpindi...
in Rawalpindi
Rawalpindi
Rawalpindi , locally known as Pindi, is a city in the Pothohar region of Pakistan near Pakistan's capital city of Islamabad, in the province of Punjab. Rawalpindi is the fourth largest city in Pakistan after Karachi, Lahore and Faisalabad...
, Pakistan
Pakistan
Pakistan , officially the Islamic Republic of Pakistan is a sovereign state in South Asia. It has a coastline along the Arabian Sea and the Gulf of Oman in the south and is bordered by Afghanistan and Iran in the west, India in the east and China in the far northeast. In the north, Tajikistan...
.

Saint Mary's Cambridge High School is one of the oldest independent school
Independent school
An independent school is a school that is independent in its finances and governance; it is not dependent upon national or local government for financing its operations, nor reliant on taxpayer contributions, and is instead funded by a combination of tuition charges, gifts, and in some cases the...
s of Rawalpindi. The first owner of the school was Mr. Faiq Ayubi. It is housed in an old building which was previously used as hospital, named Holy Family Hospital. The hospital moved to its present building in Satellite Town during the early 1960s and the building was handed over to the school. The school is owned and managed by the Roman Catholic Diocese of Islamabad-Rawalpindi
Roman Catholic Diocese of Islamabad-Rawalpindi
The Roman Catholic Diocese of Islamabad-Rawalpindi is a diocese of the Latin Rite of the Roman Catholic Church in Pakistan....
. It provides religious education in Islam
Islam
Islam . The most common are and .   : Arabic pronunciation varies regionally. The first vowel ranges from ~~. The second vowel ranges from ~~~...
as per the curriculum decided by the local education board.

St. Mary's is located on Murree Road between Liaqat Bagh and Committee Chowk. It was once easily accessible from anywhere in the city and from Islamabad, but with increasing traffic in the city, pupils from areas further afield do not join the school anymore.

This school caters only to boy
Boy
A boy is a young male human , as contrasted to its female counterpart, girl, or an adult male, a man.The term "boy" is primarily used to indicate biological sex distinctions, cultural gender role distinctions or both...
s. The classes are from Playgroup
Playgroup
Playgroup may refer to:* Pre-school playgroup, a kind of pre-school care*Playgroup , a British dance act*Playgroup , arts and entertainment events in England...
to year 10 (known as Matric). After 8th grade, A and B section are for those students who opt for Biology as their major subject and C is for those who opt for Computer Science. But since 2010, classification of biology and computer was closed, there have been a Board Examination of 8th Grade. All students study science and computer science. There is one book of science, divided into three portions: Biology, Chemistry and Physics.

The school has three main blocks, with a separate block for primary education
Primary education
A primary school is an institution in which children receive the first stage of compulsory education known as primary or elementary education. Primary school is the preferred term in the United Kingdom and many Commonwealth Nations, and in most publications of the United Nations Educational,...
. It has a playfield used for football and cricket
Cricket
Cricket is a bat-and-ball game played between two teams of 11 players on an oval-shaped field, at the centre of which is a rectangular 22-yard long pitch. One team bats, trying to score as many runs as possible while the other team bowls and fields, trying to dismiss the batsmen and thus limit the...
; and a basketball court
Basketball court
In basketball, the basketball court is the playing surface, consisting of a rectangular floor with tiles at either end. In professional or organized basketball, especially when played indoors, it is usually made out of a wood, often maple, and highly polished...
, volleyball
Volleyball
Volleyball is a team sport in which two teams of six players are separated by a net. Each team tries to score points by grounding a ball on the other team's court under organized rules.The complete rules are extensive...
court and outdoor badminton
Badminton
Badminton is a racquet sport played by either two opposing players or two opposing pairs , who take positions on opposite halves of a rectangular court that is divided by a net. Players score points by striking a shuttlecock with their racquet so that it passes over the net and lands in their...
court.

The names of the houses (with their colors and captains) are:

On May 10, 2008, the school was the venue for a Run for Unity program. It involved students aged 11–15 in drawing, essay-writing, poetry, song, PowerPoint and video-making competitions. Archbishop Adolfo Tito Yllana
Adolfo Tito Yllana
Adolfo Tito Yllana was born on 6 February 1948 in Naga City, Philippines. He is a Roman Catholic archbishop, and is presently the Apostolic Nuncio to the Democratic Republic of the Congo. He undertook religious studies from the Holy Rosary Seminary also in the same city. On 19 March 1972 he was...
, the apostolic nuncio to Pakistan, and Bishop Anthony Lobo
Anthony Theodore Lobo
Anthony Theodore Lobo is a Pakistani Roman Catholic bishop. He was born in Karachi, Pakistan on July 4, 1937 to parents of Goan origin. He received his early education at Saint Patrick's High School and religious training at the Christ the King seminary in Karachi, and was ordained a priest in...
attended.