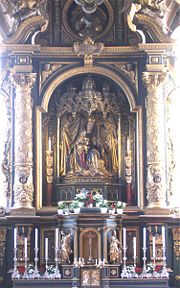 Saint Mary Ramersdorf in the district Ramersdorf-Perlach of Munich
Munich
Munich The city's motto is "" . Before 2006, it was "Weltstadt mit Herz" . Its native name, , is derived from the Old High German Munichen, meaning "by the monks' place". The city's name derives from the monks of the Benedictine order who founded the city; hence the monk depicted on the city's coat...
is a parish church and church of pilgrimage.

The gothic
Gothic architecture
Gothic architecture is a style of architecture that flourished during the high and late medieval period. It evolved from Romanesque architecture and was succeeded by Renaissance architecture....
building was mentioned for the first time in a document in 1315. The pilgrimage began with a relic
Relic
In religion, a relic is a part of the body of a saint or a venerated person, or else another type of ancient religious object, carefully preserved for purposes of veneration or as a tangible memorial...
, a crucifix
Crucifix
A crucifix is an independent image of Jesus on the cross with a representation of Jesus' body, referred to in English as the corpus , as distinct from a cross with no body....
which had been handed over to Emperor Louis IV
Louis IV, Holy Roman Emperor
Louis IV , called the Bavarian, of the house of Wittelsbach, was the King of Germany from 1314, the King of Italy from 1327 and the Holy Roman Emperor from 1328....
by Antipope Nicholas V
Antipope Nicholas V
Nicholas V, born Pietro Rainalducci was an antipope in Italy from 12 May 1328 to 25 July 1330 during the pontificate of Pope John XXII at Avignon. He was the last Imperial antipope, that is, set up by a Holy Roman Emperor.-Life:Rainalducci was born at Corvaro, an ancient stronghold near Rieti in...
and which was later donated to the church by one of the emperor's sons, likely Duke Otto V
Otto V, Duke of Bavaria
Otto V, Duke of Bavaria , was a duke of Bavaria and Elector of Brandenburg as Otto VII. Otto was the fourth son of Holy Roman Emperor Louis IV by his second wife Margaret II of Avesnes, countess of Hainaut and Holland.-Biography:...
. The building was redesigned and extended shortly before 1400 in late gothic style. The Onion dome
Onion dome
An onion dome is a dome whose shape resembles the onion, after which they are named. Such domes are often larger in diameter than the drum upon which they are set, and their height usually exceeds their width...
was constructed in 1791 after a lightning puncture.

The interior is decorated in baroque
Baroque
The Baroque is a period and the style that used exaggerated motion and clear, easily interpreted detail to produce drama, tension, exuberance, and grandeur in sculpture, painting, literature, dance, and music...
style during the 17th century. The high altar with an Enthroned Madonna by Erasmus Grasser
Erasmus Grasser
Erasmus Grasser was a leading sculptor in Munich in the early 16th century.He developed in an animated and realistic style, furthering on the works of Nikolaus Gerhaert...
and paintings of Jan Polack
Jan Polack
Jan Polack Johannes Polack , was a 15th-century painter....
(ca 1480) is a major sight.
The source of this article is wikipedia, the free encyclopedia.  The text of this article is licensed under the GFDL.