Encyclopedia
The St. Jacobi church is one of the five principal Lutheran
Evangelical Church in Germany
The Evangelical Church in Germany is a federation of 22 Lutheran, Unified and Reformed Protestant regional church bodies in Germany. The EKD is not a church in a theological understanding because of the denominational differences. However, the member churches share full pulpit and altar...
churches of Hamburg
Hamburg
-History:The first historic name for the city was, according to Claudius Ptolemy's reports, Treva.But the city takes its modern name, Hamburg, from the first permanent building on the site, a castle whose construction was ordered by the Emperor Charlemagne in AD 808...
, Germany
Germany
Germany , officially the Federal Republic of Germany , is a federal parliamentary republic in Europe. The country consists of 16 states while the capital and largest city is Berlin. Germany covers an area of 357,021 km2 and has a largely temperate seasonal climate...
. The church is located directly in the city center, has a 125 m tall tower and features a famous organ by Arp Schnitger
Arp Schnitger
Arp Schnitger was a highly influential German organ builder. He was primarily active in Northern Europe, especially the Netherlands and Germany, where a number of his instruments survive to the present day; his organs can also be found as far away as Portugal and Brazil.Notable examples still in...
from 1693. It is dedicated to St James the Greater and often incorrectly known in English as St Jacob's.

When it was first mentioned in 1255, St. Jacobi was a small chapel located outside the Hamburg city walls. After these were extended in 1260, the church became part of the Hamburg city territory. It is now in downtown Hamburg, hidden behind one of the main shopping streets (Mönckebergstraße).

Between 1350 and 1400, the chapel was replaced by a hall church
Hall church
A hall church is a church with nave and side aisles of approximately equal height, often united under a single immense roof. The term was first coined in the mid-19th century by the pioneering German art historian Wilhelm Lübke....
with three nave
Nave
In Romanesque and Gothic Christian abbey, cathedral basilica and church architecture, the nave is the central approach to the high altar, the main body of the church. "Nave" was probably suggested by the keel shape of its vaulting...
s, similar to St. Petri
St. Petri, Hamburg
The St. Peter's Church ] in Hamburg was built on top of many churches. It was built by order of Pope Leo the Tenth.-History:...
. Around one hundred years later, a fourth nave was added to the south side of the structure. The sacristy
Sacristy
A sacristy is a room for keeping vestments and other church furnishings, sacred vessels, and parish records.The sacristy is usually located inside the church, but in some cases it is an annex or separate building...
in the northeast also comes from this time (1438) and is today Hamburg's only example of secular gothic
Gothic architecture
Gothic architecture is a style of architecture that flourished during the high and late medieval period. It evolved from Romanesque architecture and was succeeded by Renaissance architecture....
architecture.

The second tower, erected in 1826/27 after the first became dilapidated, was destroyed with the rest of the church building by bombing during World War II
World War II
World War II, or the Second World War , was a global conflict lasting from 1939 to 1945, involving most of the world's nations—including all of the great powers—eventually forming two opposing military alliances: the Allies and the Axis...
. Only the historic interior furnishings were saved. In 1963, St. Jacobi was rebuilt according to the medieval design, albeit with a modern spire
Spire
A spire is a tapering conical or pyramidal structure on the top of a building, particularly a church tower. Etymologically, the word is derived from the Old English word spir, meaning a sprout, shoot, or stalk of grass....
.

The building sits a few meters east of the 10th meridian east
10th meridian east
The meridian 10° east of Greenwich is a line of longitude that extends from the North Pole across the Arctic Ocean, Europe, Africa, the Atlantic Ocean, the Southern Ocean, and Antarctica to the South Pole....
longitude, which runs through the city center. 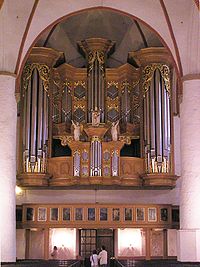 The famous Arp Schnitger organ
Schnitger organ (Hamburg)
The Arp Schnitger organ in St. Jacobi Church, Hamburg, , one of the five Hauptkirchen of Hamburg, is a world-famous monument of North-German organ building, and the largest surviving baroque organ in Northern Europe....
of 1693 in the west gallery is, with its 60 registers and around 4,000 pipes, is the largest baroque
Baroque
The Baroque is a period and the style that used exaggerated motion and clear, easily interpreted detail to produce drama, tension, exuberance, and grandeur in sculpture, painting, literature, dance, and music...
organ in Northern Europe. From 1989 to 1993, the organ was completely restored, and since its rededication at Easter
Easter
Easter is the central feast in the Christian liturgical year. According to the Canonical gospels, Jesus rose from the dead on the third day after his crucifixion. His resurrection is celebrated on Easter Day or Easter Sunday...
1993 it can be heard every Sunday during services.

Also deserving of notice is the Ministers' Room, which originally served as a library. Since 1543, it has been the collection room of the church ministers, and was remodeled in 1710. The ceiling murals, with their civic virtues, show the importance of maintaining parish to the city regiment. They were painted, like the landscape paintings on the wall, by Johann Moritz Riesenberger. Coats of arms on the walls name the pastors, vicars, and jurors who have served the parish since the sixteenth century. 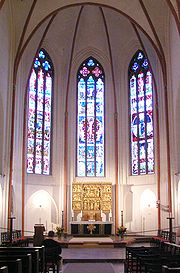