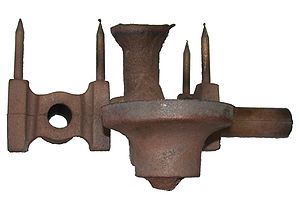 A sprue is the passage through which liquid material is introduced into a mold. During casting
Casting
In metalworking, casting involves pouring liquid metal into a mold, which contains a hollow cavity of the desired shape, and then allowing it to cool and solidify. The solidified part is also known as a casting, which is ejected or broken out of the mold to complete the process...
or molding
Molding (process)
Molding or moulding is the process of manufacturing by shaping pliable raw material using a rigid frame or model called a pattern....
, the material in the sprue will solidify and need to be removed from the finished part.

In casting
Casting
In metalworking, casting involves pouring liquid metal into a mold, which contains a hollow cavity of the desired shape, and then allowing it to cool and solidify. The solidified part is also known as a casting, which is ejected or broken out of the mold to complete the process...
, a sprue is the passage through which a molten material is introduced into a mold
Molding (process)
Molding or moulding is the process of manufacturing by shaping pliable raw material using a rigid frame or model called a pattern....
, and the term also refers to the excess material which solidifies in the sprue passage. In sand casting
Sand casting
Sand casting, also known as sand molded casting, is a metal casting process characterized by using sand as the mold material.It is relatively cheap and sufficiently refractory even for steel foundry use. A suitable bonding agent is mixed or occurs with the sand...
, the sprue is formed by a dowel
Dowel
A dowel is a solid cylindrical rod, usually made of wood, plastic or metal. In its original manufactured form, dowel is called dowel rod.Dowel rod is employed in numerous, diverse applications. It is used to form axles in toys, as detents on gymnastics grips, as knitting needles, as structural...
which is removed from the sand to make the hole into which the metal is poured.

Sprues can serve as filters, heat sink
Heat sink
A heat sink is a term for a component or assembly that transfers heat generated within a solid material to a fluid medium, such as air or a liquid. Examples of heat sinks are the heat exchangers used in refrigeration and air conditioning systems and the radiator in a car...
s, and as feeders. Bronze
Bronze
Bronze is a metal alloy consisting primarily of copper, usually with tin as the main additive. It is hard and brittle, and it was particularly significant in antiquity, so much so that the Bronze Age was named after the metal...
in particular has a high shrinkage rate as it is cooling; a sprue can continue to provide molten metal to the casting, provided it is large enough to retain its heat and stay liquid, as metal in the main casting cools and shrinks. The design of the sprue and runner system can be also utilized to trap unwanted dross
Dross
Dross is a mass of solid impurities floating on a molten metal. It appears usually on the melting of low-melting-point metals or alloys such as tin, lead, zinc or aluminium, or by oxidation of the metal. It can also consist of impurities such as paint leftovers...
and sand from continuing into the main cavity; this may include adding porous material to the runners, or designing the sprue to eject the dross to the side of the sprue using cyclonic separation
Cyclonic separation
Cyclonic separation is a method of removing particulates from an air, gas or liquid stream, without the use of filters, through vortex separation. Rotational effects and gravity are used to separate mixtures of solids and fluids...
.

The design of gating and runner is also essential for casting. The design can be done by using vertical and bottom gating.

= Acceleration due to gravity

This equation may change if the height of gating is equal to height of casting material.

Then the equation will be:

= Acceleration due to gravity

In injection molding
Injection molding
Injection molding is a manufacturing process for producing parts from both thermoplastic and thermosetting plastic materials. Material is fed into a heated barrel, mixed, and forced into a mold cavity where it cools and hardens to the configuration of the cavity...
, the term sprue refers to the passages through which a liquid material (such as polystyrene
Polystyrene
Polystyrene ) also known as Thermocole, abbreviated following ISO Standard PS, is an aromatic polymer made from the monomer styrene, a liquid hydrocarbon that is manufactured from petroleum by the chemical industry...
or polyvinyl chloride
Polyvinyl chloride
Polyvinyl chloride, commonly abbreviated PVC, is a thermoplastic polymer. It is a vinyl polymer constructed of repeating vinyl groups having one hydrogen replaced by chloride. Polyvinyl chloride is the third most widely produced plastic, after polyethylene and polypropylene. PVC is widely used in...
) flows into a die
Die (manufacturing)
A die is a specialized tool used in manufacturing industries to cut or shape material using a press. Like molds, dies are generally customized to the item they are used to create...
, where it solidifies to form parts. It also refers to the material which solidifies in these passages, forming a framework attaching the parts together in a roughly planar arrangement.

Some moldmakers make a distinction between three separate entities: the gate, the runner, and the sprue. Certainly in the plastics injection moulding industry, the gate is the location at which the molten plastic enters the mold cavity and is often seen as a small nub or projection (the "gate mark") on the molded piece. The sprues are large-diameter channels through which plastic flows, usually around the edges of the part or along straight lines. Finally, in this naming scheme, the runner represents only the smaller channels that divert from the sprue to the individual part. An analogy to the sprue/runner system might represent the sprues with city water mains, and runners with the smaller pipes leading to individual houses.