A spiro compound is a bicyclic organic compound
Organic compound
An organic compound is any member of a large class of gaseous, liquid, or solid chemical compounds whose molecules contain carbon. For historical reasons discussed below, a few types of carbon-containing compounds such as carbides, carbonates, simple oxides of carbon, and cyanides, as well as the...
with rings connected through just one atom. The rings can be different in nature or identical. The connecting atom is also called the spiroatom, most often a quaternary carbon ("spiro carbon"). All spiro compounds have the infix
Infix
An infix is an affix inserted inside a word stem . It contrasts with adfix, a rare term for an affix attached to the end of a stem, such as a prefix or suffix.-Indonesian:...
spiro followed by square brackets containing the number of atoms in the smaller ring and the number of atoms in the larger ring excluding the spiroatom itself; the numbers being separated by a dot. For example compound A is called 1-bromo-3-chlorospiro[4.5]decan-7-ol and compound B is called 1-bromo-3-chlorospiro[3.6]decan-7-ol. The spiro compound consisting of a cyclohexane
Cyclohexane
Cyclohexane is a cycloalkane with the molecular formula C6H12. Cyclohexane is used as a nonpolar solvent for the chemical industry, and also as a raw material for the industrial production of adipic acid and caprolactam, both of which being intermediates used in the production of nylon...
ring and a cyclopentane
Cyclopentane
Cyclopentane is a highly flammable alicyclic hydrocarbon with chemical formula 510 and CAS number 287-92-3, consisting of a ring of five carbon atoms each bonded with two hydrogen atoms above and below the plane. It occurs as a colorless liquid with a petrol-like odor. Its melting point is −94 °C...
ring is called spiro[4.5]decane. This nomenclature
IUPAC nomenclature
A chemical nomenclature is a set of rules to generate systematic names for chemical compounds. The nomenclature used most frequently worldwide is the one created and developed by the International Union of Pure and Applied Chemistry ....
was proposed by Adolf von Baeyer
Adolf von Baeyer
Johann Friedrich Wilhelm Adolf von Baeyer was a German chemist who synthesized indigo, and was the 1905 recipient of the Nobel Prize in Chemistry. Born in Berlin, he initially studied mathematics and physics at Berlin University before moving to Heidelberg to study chemistry with Robert Bunsen...
in 1900 . 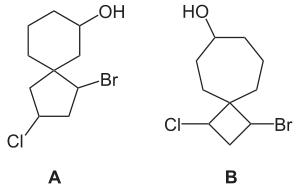 Acetals of cyclic ketones with diols or dithiols are spiro compounds. A example is Spirapril
Spirapril
Spirapril hydrochloride is an ACE inhibitor antihypertensive drug used to treat hypertension.Like many ACE inhibitors, this is a prodrug which is converted to the active metabolite spiraprilat following oral administration...
, with a five membered ring formed from 1,2-ethanedithiol
1,2-Ethanedithiol
1,2-Ethanedithiol is a colorless liquid with the formula C2H42. It has a very characteristic odor which is compared by many people to rotten cabbage. It is a common building block in organic synthesis and an excellent ligand for metal ions.-Preparation:...
.

A polyspiro compound is connected by two or more spiroatoms making up three or more rings
Aromatic hydrocarbon
An aromatic hydrocarbon or arene is a hydrocarbon with alternating double and single bonds between carbon atoms. The term 'aromatic' was assigned before the physical mechanism determining aromaticity was discovered, and was derived from the fact that many of the compounds have a sweet scent...
.

When naming polyspiro compounds, the prefixes
Numerical prefix
Number prefixes are prefixes derived from numbers or numerals. In English and other European languages, they are used to coin numerous series of words, such as unicycle – bicycle – tricycle, dyad – triad – decade, biped – quadruped, September – October – November – December, decimal – hexadecimal,...
di-, tri-, tetra-, etc. are first added to the front of the name to indicate the amount of spiroatoms, the single atoms between each ring. The atoms of the compound are numbered systematically. A polyspiro compound is numbered starting from a ring that holds one connecting spiroatom to another ring, i.e. a terminal ring; there can be two or more terminal rings to a polyspiro compound, so long as each of these rings has only one connecting spiroatom. In the terminal ring chosen to start the numbering, an atom of the ring next, and connected to the spiroatom, is labeled 1. Each following atom is numbered one higher than the previous—going around the compound.

Of the two or more terminal rings of any polyspiro compound, the terminal ring to start the numbering is chosen in such a way that the first spiroatom to be numbered, after numbering every other atom within the chosen ring, is the lowest possible number that can be assigned a spiroatom. For example, suppose there is a compound where there are two terminal rings, 6 atoms in one ring, and 8 in another. The 6-atom ring is chosen to start the numbering, because after each other atom within the ring is numbered, the spiroatom is numbered 6, whereas the spiroatom of the 8-atom ring would be numbered 8. The direction of the numbering is determined by the following spiroatom (after the first numbered spiroatom of that terminal ring has been numbered/passed). If the following spiroatom in one direction assigned a number that is lower than the number it would be assigned in the opposite direction, then the direction of numbering that assigns the next spiroatom the lowest number is picked. The magnitude of the rest of the numbers given to the rest of the spiroatoms in the compound is irrelevant.

In polyspiro nomenclature the first number within the brackets is the amount of atoms starting from the atom numbered 1 to the last atom on the first ring before the first numbered spiroatom. The rest of the numbers represent the amount of atoms between the spiroatoms, or the amount of atoms at a terminal ring, going in the direction of the numbering. Each number is separated by a period. In the example to the left there are two atoms (numbered 1 and 2) before the first spiroatom (3). Between spiroatoms 3 and 4 there are zero, and likewise between 5 and 4, and 6 and 5. At the second terminal ring there are two; there is one between 6 and 5, 5 and 4, and 4 and 3. This gives the sequence [2.0.0.0.2.1.1.1]. The total number of atoms determines the acyclic alkane
Alkane
Alkanes are chemical compounds that consist only of hydrogen and carbon atoms and are bonded exclusively by single bonds without any cycles...
name that follows, in this case, undecane
Undecane
Undecane is a liquid alkane hydrocarbon with the chemical formula CH39CH3. It is used as a mild sex attractant for various types of moths and cockroaches, and an alert signal for a variety of ants. It has 159 isomers....
. For clarity, superscripts of the spiroatom numbers appear after the number of atoms that are the last to encounter the spiroatom, going in the direction of the numbering.

In the example to the right, there are two spiroatoms, so the name starts with dispiro-. In the first terminal ring, there are two atoms, showing so far the name dispiro[2. Between the next two spiroatoms there is one atom, and four at the other terminal ring, revealing the name dispiro[2.1.35. The superscript for the second spiroatom, numbered 5, was added as this is the last time it will be encountered after the three atoms at the terminal ring, following the path of numbered atoms. After adding atoms 9 and 10 between spiroatoms 3 and 5, then adding the name of the alkane that has the same amount of atoms as this spiro compound, decane
Decane
Decane is an alkane hydrocarbon with the chemical formula CH38CH3.75 structural isomers of decane exist, all of which are flammable liquids. Decane is one of the components of gasoline . Like other alkanes, it is nonpolar and therefore will not dissolve in polar liquids such as water...
, the name dispiro[2.1.35.23]decane is revealed. The superscript for spiroatom 3 is added after the atoms 9 and 10 are represented (by a 2) since after these two atoms are encountered the spiroatom 3 is encountered for the last time.

Some spiro compounds exhibit axial chirality
Axial chirality
Axial chirality is a special case of chirality in which a molecule does not possess a stereogenic center but an axis of chirality – an axis about which a set of substituents is held in a spatial arrangement that is not superposable on its mirror image...
. Spiroatoms can be centers of chirality
Chirality (chemistry)
A chiral molecule is a type of molecule that lacks an internal plane of symmetry and thus has a non-superimposable mirror image. The feature that is most often the cause of chirality in molecules is the presence of an asymmetric carbon atom....
even when they lack the required four different substituents normally observed in chirality. When two rings are identical the priority is determined by a slight modification of the CIP system assigning a higher priority to one ring extension and a lower priority to an extension in the other ring. When rings are dissimilar the regular rules apply. 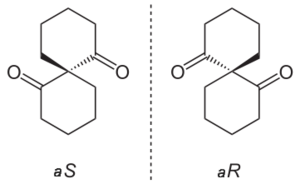 Spiro forms of lactone
Lactone
In chemistry, a lactone is a cyclic ester which can be seen as the condensation product of an alcohol group -OH and a carboxylic acid group -COOH in the same molecule...
s and oxazines are frequently used as leuco dye
Leuco dye
A leuco dye is a dye whose molecules can acquire two forms, one of which is colorless.For example, the spiro form of an oxazine is a colorless leuco dye; the conjugated system of the oxazine and another aromatic part of the molecule is separated by an sp3-hybridized "spiro" carbon...
s, frequently displaying chromism
Chromism
In chemistry, chromism is a process that induces a change, often reversible, in the colors of compounds. In most cases, chromism is based on a change in the electron states of molecules, especially the π- or d-electron state, so this phenomenon is induced by various external stimuli which can alter...
- reversible change between their colorless and color form.