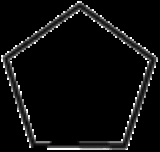 Overview
Cyclopentane is a highly flammable alicyclic
Alicyclic compound
An alicyclic compound is an organic compound that is both aliphatic and cyclic. They contain one or more all-carbon rings which may be either saturated or unsaturated, but do not have aromatic character...
hydrocarbon
Hydrocarbon
In organic chemistry, a hydrocarbon is an organic compound consisting entirely of hydrogen and carbon. Hydrocarbons from which one hydrogen atom has been removed are functional groups, called hydrocarbyls....
with chemical formula
Chemical formula
A chemical formula or molecular formula is a way of expressing information about the atoms that constitute a particular chemical compound....
510 and CAS number 287-92-3, consisting of a ring of five carbon
Carbon
Carbon is the chemical element with symbol C and atomic number 6. As a member of group 14 on the periodic table, it is nonmetallic and tetravalent—making four electrons available to form covalent chemical bonds...
atoms each bonded with two hydrogen
Hydrogen
Hydrogen is the chemical element with atomic number 1. It is represented by the symbol H. With an average atomic weight of , hydrogen is the lightest and most abundant chemical element, constituting roughly 75% of the Universe's chemical elemental mass. Stars in the main sequence are mainly...
atoms above and below the plane. It occurs as a colorless liquid
Liquid
Liquid is one of the three classical states of matter . Like a gas, a liquid is able to flow and take the shape of a container. Some liquids resist compression, while others can be compressed. Unlike a gas, a liquid does not disperse to fill every space of a container, and maintains a fairly...
with a petrol-like odor
Odor
An odor or odour is caused by one or more volatilized chemical compounds, generally at a very low concentration, that humans or other animals perceive by the sense of olfaction. Odors are also commonly called scents, which can refer to both pleasant and unpleasant odors...
. Its melting point
Melting point
The melting point of a solid is the temperature at which it changes state from solid to liquid. At the melting point the solid and liquid phase exist in equilibrium. The melting point of a substance depends on pressure and is usually specified at standard atmospheric pressure...
is −94 °C and its boiling point
Boiling point
The boiling point of an element or a substance is the temperature at which the vapor pressure of the liquid equals the environmental pressure surrounding the liquid....
is 49 °C. Cyclopentane is in the class of cycloalkane
Cycloalkane
Cycloalkanes are types of alkanes that have one or more rings of carbon atoms in the chemical structure of their molecules. Alkanes are types of organic hydrocarbon compounds that have only single chemical bonds in their chemical structure...
s, being alkane
Alkane
Alkanes are chemical compounds that consist only of hydrogen and carbon atoms and are bonded exclusively by single bonds without any cycles...
s that have one or more rings of carbon atoms
Carbon ring
Carbon rings are rings of carbon atoms. Rings of five and six carbons are by far the most common, as they allow bond angles close to the ideal angle of 109.5°. Rings of three and four are possible, but with bond angles of 60° and 90°, they have a larger ring strain and are unstable...
.
Cyclopentane is used in the manufacture of synthetic
Chemical synthesis
In chemistry, chemical synthesis is purposeful execution of chemical reactions to get a product, or several products. This happens by physical and chemical manipulations usually involving one or more reactions...
resin
Resin
Resin in the most specific use of the term is a hydrocarbon secretion of many plants, particularly coniferous trees. Resins are valued for their chemical properties and associated uses, such as the production of varnishes, adhesives, and food glazing agents; as an important source of raw materials...
s and rubber
Rubber
Natural rubber, also called India rubber or caoutchouc, is an elastomer that was originally derived from latex, a milky colloid produced by some plants. The plants would be ‘tapped’, that is, an incision made into the bark of the tree and the sticky, milk colored latex sap collected and refined...
adhesive
Adhesive
An adhesive, or glue, is a mixture in a liquid or semi-liquid state that adheres or bonds items together. Adhesives may come from either natural or synthetic sources. The types of materials that can be bonded are vast but they are especially useful for bonding thin materials...
s and also as a blowing agent
Blowing agent
A blowing agent is a substance which is capable of producing a cellular structure via a foaming process in a variety of materials that undergo hardening or phase transition, such as polymers, plastics, and metals. They are typically applied when the blown material is in a liquid stage...
in the manufacture of polyurethane
Polyurethane
A polyurethane is any polymer composed of a chain of organic units joined by carbamate links. Polyurethane polymers are formed through step-growth polymerization, by reacting a monomer with another monomer in the presence of a catalyst.Polyurethanes are...
insulating foam, as found in many domestic appliances such as refrigerator
Refrigerator
A refrigerator is a common household appliance that consists of a thermally insulated compartment and a heat pump that transfers heat from the inside of the fridge to its external environment so that the inside of the fridge is cooled to a temperature below the ambient temperature of the room...
s and freezers, replacing environmentally damaging alternatives such as CFC-11
Trichlorofluoromethane
Trichlorofluoromethane, also called freon-11, CFC-11, or R-11, is a chlorofluorocarbon. It is a colorless, nearly odorless liquid that boils at about room temperature.- Uses :It was the first widely used refrigerant...
and HCFC-141b
1,1-Dichloro-1-fluoroethane
1,1-Dichloro-1-fluoroethane is a haloalkane with the formula . It is one of the three isomers of dichlorofluoroethane.- Use :1,1-Dichloro-1-fluoroethane is mainly used as a refrigerant under the names R-141b or HCFC-141b.- Physico-chemical properties :...

For example, 2-methylbutane can be reformed into cyclopentane, by use of a platinum catalyst.

What is carbon to carbon on cylcopentane?
More
x