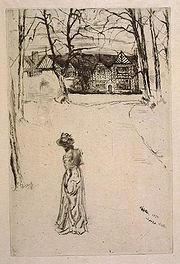 Speke Hall is a wood-framed wattle-and-daub Tudor
Tudor architecture
The Tudor architectural style is the final development of medieval architecture during the Tudor period and even beyond, for conservative college patrons...
manor house in Speke
Speke
Speke is an area of Liverpool, Merseyside, England, close to the boundaries of the Metropolitan Borough of Knowsley. It is south east of the city centre and to the west of the town of Widnes....
, Liverpool
Liverpool
Liverpool is a city and metropolitan borough of Merseyside, England, along the eastern side of the Mersey Estuary. It was founded as a borough in 1207 and was granted city status in 1880...
, England
England
England is a country that is part of the United Kingdom. It shares land borders with Scotland to the north and Wales to the west; the Irish Sea is to the north west, the Celtic Sea to the south west, with the North Sea to the east and the English Channel to the south separating it from continental...
. It is one of the finest surviving examples of its kind.

Construction of the current building began in 1530, though earlier buildings had been on the site, parts of which are incorporated into today's structure. The Great Hall
Great Hall
Great Hall may refer to* Great hall, the main room of a royal palace, nobleman's castle or large manor house* Great Hall of the People, Tiananmen Square, Beijing* Great Hall of the University of Sydney, Australia* Cooper_Union#The_Great_Hall, New York...
was the first part of the house to be built, in 1530. The Great (or Oak) Parlour) wing was added in 1531. Around this time the North Bay was also added to the house. Between 1540 and 1570 the south wing was altered and extended. The west wing was added between 1546 and 1547. The last significant change to the building was in 1598, when the north range was added by Edward Norris. Since then there have only been minor changes to the Hall and gardens.

The oak frame, typical of the period, rests on a base of red sandstone
Sandstone
Sandstone is a sedimentary rock composed mainly of sand-sized minerals or rock grains.Most sandstone is composed of quartz and/or feldspar because these are the most common minerals in the Earth's crust. Like sand, sandstone may be any colour, but the most common colours are tan, brown, yellow,...
surrounded by a now dry moat. The main beams of the house are stiffened with smaller timbers and filled with wattle and daub
Wattle and daub
Wattle and daub is a composite building material used for making walls, in which a woven lattice of wooden strips called wattle is daubed with a sticky material usually made of some combination of wet soil, clay, sand, animal dung and straw...
.

The house features a thunderbox toilet, a priest hole
Priest hole
"Priest hole" is the term given to hiding places for priests built into many of the principal Catholic houses of England during the period when Catholics were persecuted by law in England, from the beginning of the reign of Queen Elizabeth I in 1558....
and a special observation hole built into a chimney in a bedroom to allow the occupant to see the approach to the house to warn the priest that people were coming. There is also an eavesdrop
Eavesdrop
To eavesdrop, used as a verb, refers to eavesdropping, the act of surreptitiously listening to a private conversation.As a noun, in architecture, it can refer to:...
(a small open hole under the eaves of the house) which allowed a servant to listen in on the conversations of people awaiting admission at the original front door.

The house belongs to the National Trust
National Trust for Places of Historic Interest or Natural Beauty
The National Trust for Places of Historic Interest or Natural Beauty, usually known as the National Trust, is a conservation organisation in England, Wales and Northern Ireland...
and is open to the public. The house was owned by the Norris family for many generations until the female heiress married into the Beauclerk family. The Watt family purchased the house and estate from the Beauclerks in 1795. The last surviving heir of the Watt family was Miss Adelaide Watt, who inhertited the house and returned to it in 1878 at the age of 21 years. She died in 1921, leaving the house and estate in trust for 21 years, during which time it was looked after by the staff under the supervision of Thomas Whatmore, who had been butler to Miss Watt. At the end of this period, in 1942, the house passed into the ownership of the National Trust. The house was administered by Liverpool City Corporation from 1946 until 1986, when the National Trust took over full responsibility.

Previous owners were the Norrises, the Beauclerks and the Watts.

The gardens date from the 1850s. In the main building there are two Yew
Taxus
Taxus is a genus of yews, small coniferous trees or shrubs in the yew family Taxaceae. They are relatively slow-growing and can be very long-lived, and reach heights of 1-40 m, with trunk diameters of up to 4 m...
trees called Adam and Eve which are estimated to be between 500 and 1000 years old.

The Home Farm building has been renovated and now houses the shop, restaurant and reception. The laundry
Laundry
Laundry is a noun that refers to the act of washing clothing and linens, the place where that washing is done, and/or that which needs to be, is being, or has been laundered...
has been converted into the education room and the dairy
Dairy
A dairy is a business enterprise established for the harvesting of animal milk—mostly from cows or goats, but also from buffalo, sheep, horses or camels —for human consumption. A dairy is typically located on a dedicated dairy farm or section of a multi-purpose farm that is concerned...
now has new interpretation. Walks in the grounds give panoramic views over the Mersey
Mersey
Mersey may refer to:* River Mersey, in northwest England* Mersea Island, off the coast of Essex in England * Mersey River in the Australian state* Electoral division of Mersey in the state of Tasmania, Australian...
Basin towards North Wales
Wales
Wales is a country that is part of the United Kingdom and the island of Great Britain, bordered by England to its east and the Atlantic Ocean and Irish Sea to its west. It has a population of three million, and a total area of 20,779 km²...
.

Speke Hall was featured in Series 13 of Most Haunted
Most Haunted
Most Haunted is a British paranormal documentary reality television series. The series was first shown on 25 May 2002 and ended on 21 July 2010. It was broadcast on Living and presented by Yvette Fielding. The programme was based on investigating purported paranormal activity...
which was broadcast on LivingTV
LIVINGtv
Sky Living is a UK television channel owned by British Sky Broadcasting, who purchased the Living TV Group group in 2010. Originally launched as UK Living in 1993, the channel changed its name to Living TV in 1997 and then to Living in 2007. On 1 February 2011 Living changed its name to Sky Living...
on 13 October 2009.