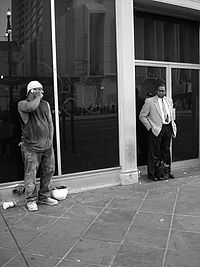 Spatial mismatch is the sociological
Sociology
Sociology is the study of society. It is a social science—a term with which it is sometimes synonymous—which uses various methods of empirical investigation and critical analysis to develop a body of knowledge about human social activity...
, economic
Economics
Economics is the social science that analyzes the production, distribution, and consumption of goods and services. The term economics comes from the Ancient Greek from + , hence "rules of the house"...
and political
Politics
Politics is a process by which groups of people make collective decisions. The term is generally applied to the art or science of running governmental or state affairs, including behavior within civil governments, but also applies to institutions, fields, and special interest groups such as the...
phenomenon
Phenomenon
A phenomenon , plural phenomena, is any observable occurrence. Phenomena are often, but not always, understood as 'appearances' or 'experiences'...
associated with economic restructuring
Economic restructuring
Economic restructuring refers to the phenomenon of Western urban areas shifting from a manufacturing to a service sector economic base. This transformation has affected demographics including income distribution, employment, and social hierarchy; institutional arrangements including the growth of...
in which employment
Employment
Employment is a contract between two parties, one being the employer and the other being the employee. An employee may be defined as:- Employee :...
opportunities for low-income people are located far away from the areas where they live. In the United States
United States
The United States of America is a federal constitutional republic comprising fifty states and a federal district...
, this takes the form of high concentrations of poverty
Poverty
Poverty is the lack of a certain amount of material possessions or money. Absolute poverty or destitution is inability to afford basic human needs, which commonly includes clean and fresh water, nutrition, health care, education, clothing and shelter. About 1.7 billion people are estimated to live...
in central cities
City
A city is a relatively large and permanent settlement. Although there is no agreement on how a city is distinguished from a town within general English language meanings, many cities have a particular administrative, legal, or historical status based on local law.For example, in the U.S...
, with low-wage, low-skill employment opportunities concentrated in the suburb
Suburb
The word suburb mostly refers to a residential area, either existing as part of a city or as a separate residential community within commuting distance of a city . Some suburbs have a degree of administrative autonomy, and most have lower population density than inner city neighborhoods...
s.

After World War I, many wealthy Americans started decentralizing out of the cities and into the suburbs. During the second half of the 20th century, department store
Department store
A department store is a retail establishment which satisfies a wide range of the consumer's personal and residential durable goods product needs; and at the same time offering the consumer a choice of multiple merchandise lines, at variable price points, in all product categories...
s followed the trend of moving into the suburbs. In 1968, J. F Kain formulated the “Spatial Mismatch Hypothesis”, although he did not refer to it by this term. In his hypothesis, he speculated that black workers reside in segregated zones that are distant and poorly connected to major centers of growth. The Spatial Mismatch phenomenon has many implications for inner city residents that are dependent on low level entry jobs. For example, distance from work centers can lead to increasing unemployment rates and furthermore dampening poverty outcomes for the region at large.

In The Mechanisms of Spatial Mismatch (2007), Laurent Gobillon, Harris Selod and Yves Zenou suggested that there are seven different factors that support the Spatial Mismatch phenomenon. Three factors are attributed to potential workers accessibility and initiatives. The remaining two factors stress employers’ reluctance to divert away from the negative stigma of city people and in particular minorities when hiring. 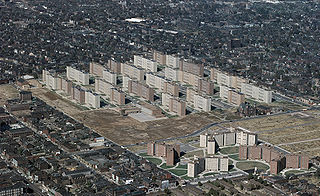