Encyclopedia
A space toilet
Toilet
A toilet is a sanitation fixture used primarily for the disposal of human excrement, often found in a small room referred to as a toilet/bathroom/lavatory...
, or zero gravity toilet, is a toilet that can be used in a weightless
Weightlessness
Weightlessness is the condition that exists for an object or person when they experience little or no acceleration except the acceleration that defines their inertial trajectory, or the trajectory of pure free-fall...
environment. In the absence of weight the collection and retention of liquid and solid waste is directed by use of air flow. Since the air used to direct the waste is returned to the cabin, it is filtered beforehand to control odor and cleanse bacteria. In older systems, waste water is vented into space and any solids are compressed and stored for removal upon landing. More modern systems expose solid waste to vacuum to kill bacteria, which prevents odor problems and kills pathogens. 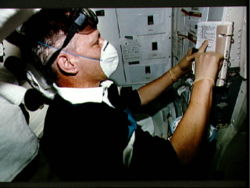 There are 4 basic parts in a space toilet, the liquid waste vacuum tube, the vacuum chamber, the waste storage drawers, and the solid waste collection bags. The liquid waste vacuum tube is a 2 to 3 foot (0.9144 m) long rubber or plastic hose that is attached to under the vacuum chamber. It is connected to a fan that provides suction. On the end is a detachable urine receptacle. There are 2 different kinds; for male and female astronauts. The male kind is a plastic funnel 2 to 3 inches in width and about 4 inches deep. A male astronaut would urinate directly into the funnel. He would have to keep 2 to 3 inches away to not get sucked into the funnel. The female version is a funnel that is oval in shape and is 2 inches by 4 inches wide at the rim. Near the rim of the funnel are small holes or slits for air to pass through so an astronaut can place the funnel on her body without getting sucked in. The vacuum chamber is a cylinder about 1 foot (0.3048 m) deep and 6 inches wide. On the rim of it are clips where you attach waste collection bags. At the back is a fan that provides suction. The waste storage drawers are where they store the waste. Urine is pumped into one of these drawers. They freeze a sample of urine and solid waste and send it to Earth for testing. The solid waste collection bag is a detachable bag that is made of a special fabric that lets gas but not liquid or solid through. This allows the fan at the back of the vacuum chamber to pull the waste into the bag. When the astronaut is done using it he/she twists their bag and places it in a waste storage drawer.

The toilet used on the Space Shuttle
Space Shuttle
The Space Shuttle was a manned orbital rocket and spacecraft system operated by NASA on 135 missions from 1981 to 2011. The system combined rocket launch, orbital spacecraft, and re-entry spaceplane with modular add-ons...
is called the Waste Collection System (WCS). In addition to air flow, it also uses rotating fans to distribute solid waste for in-flight storage. Solid waste is distributed in a cylindrical container which is then exposed to vacuum to dry the waste. Liquid waste is vented to space. During STS-46
STS-46
STS-46 was a NASA space shuttle mission using orbiter Atlantis and launched on 31 July 1992 at 9:56:48 am EDT.-Crew:-Mission parameters:*Mass:**Orbiter landing with payload: **Payload: *Perigee: *Apogee:...
, one of the fans malfunctioned, and crew member Claude Nicollier
Claude Nicollier
Claude Nicollier is the first astronaut from Switzerland, and has flown on four Space Shuttle missions. His first spaceflight was in 1992, and his final spaceflight was in 1999. He took part in two servicing missions to the Hubble Space Telescope...
was required to perform in-flight maintenance (IFM). An earlier, complete failure, on the eight-day STS-3
STS-3
STS-3 was NASA's third Space Shuttle mission, and was the third mission for the Space Shuttle Columbia. It was the first shuttle launch with an unpainted external tank, and the only mission to land at the White Sands Space Harbor near Las Cruces, New Mexico.-Crew:-Backup crew:-Mission...
test flight, forced its two-man crew (Jack Lousma and Gordon Fullerton) to use a plastic bag for waste elimination and disposal.

There are two toilets on the International Space Station
International Space Station
The International Space Station is a habitable, artificial satellite in low Earth orbit. The ISS follows the Salyut, Almaz, Cosmos, Skylab, and Mir space stations, as the 11th space station launched, not including the Genesis I and II prototypes...
, located in the Zvezda and Tranquility modules. They use a fan-driven suction system similar to the Space Shuttle
Space Shuttle
The Space Shuttle was a manned orbital rocket and spacecraft system operated by NASA on 135 missions from 1981 to 2011. The system combined rocket launch, orbital spacecraft, and re-entry spaceplane with modular add-ons...
WCS. Liquid waste is collected in 20 litre containers. Solid waste is collected in individual micro-perforated bags which are stored in an aluminum container. Full containers are transferred to Progress for disposal. An additional Waste and Hygiene Compartment is part of the Tranquility module launched in 2010. In 2007, NASA purchased a Russian-made toilet similar to the one already aboard ISS rather than develop one internally.

On May 21, 2008, the gas liquid separator pump failed on the 7-year-old toilet in Zvezda, although the solid waste portion is still functioning. The crew attempted to replace various parts, but was unable to repair the malfunctioning part. In the interim, they used a manual mode for urine collection. The crew has other options: use the toilet on the Soyuz transport module (which only has capacity for a few days of use) or to use urine collection bags as needed. A replacement pump was sent from Russia in a diplomatic pouch
Diplomatic bag
A diplomatic bag, also known as a diplomatic pouch is a kind of receptacle used by diplomatic missions. The physical concept of a "diplomatic bag" is flexible and therefore can take many forms e.g. an envelope, parcel, large suitcase or shipping container, etc...
so that Space Shuttle Discovery
Space Shuttle Discovery
Space Shuttle Discovery is one of the retired orbiters of the Space Shuttle program of NASA, the space agency of the United States, and was operational from its maiden flight, STS-41-D on August 30, 1984, until its final landing during STS-133 on March 9, 2011...
could take it to the station as part of mission STS-124
STS-124
STS-124 was a Space Shuttle mission, flown by Space Shuttle Discovery to the International Space Station. Discovery launched on 31 May 2008 at 17:02 EDT, moved from an earlier scheduled launch date of 25 May 2008, and landed safely at the Kennedy Space Center's Shuttle Landing Facility, at 11:15...
on June 2.

The Soviet
Soviet Union
The Soviet Union , officially the Union of Soviet Socialist Republics , was a constitutionally socialist state that existed in Eurasia between 1922 and 1991....
/Russian Space Station
Space station
A space station is a spacecraft capable of supporting a crew which is designed to remain in space for an extended period of time, and to which other spacecraft can dock. A space station is distinguished from other spacecraft used for human spaceflight by its lack of major propulsion or landing...
Mir
Mir
Mir was a space station operated in low Earth orbit from 1986 to 2001, at first by the Soviet Union and then by Russia. Assembled in orbit from 1986 to 1996, Mir was the first modular space station and had a greater mass than that of any previous spacecraft, holding the record for the...
's toilet also used a system similar to the WCS.

While the Soyuz spacecraft
Soyuz spacecraft
Soyuz , Union) is a series of spacecraft initially designed for the Soviet space programme by the Korolyov Design Bureau in the 1960s, and still in service today...
had an onboard toilet facility since its introduction in 1967 (due to the additional space in the Orbital Module), all Gemini
Project Gemini
Project Gemini was the second human spaceflight program of NASA, the civilian space agency of the United States government. Project Gemini was conducted between projects Mercury and Apollo, with ten manned flights occurring in 1965 and 1966....
and Apollo
Project Apollo
The Apollo program was the spaceflight effort carried out by the United States' National Aeronautics and Space Administration , that landed the first humans on Earth's Moon. Conceived during the Presidency of Dwight D. Eisenhower, Apollo began in earnest after President John F...
spacecraft required astronauts to urinate in a so-called "relief tube," in which the contents were dumped into space (an example would be the urine dump scene in the movie Apollo 13), while fecal matter were collected in specially-designed bags. The Skylab
Skylab
Skylab was a space station launched and operated by NASA, the space agency of the United States. Skylab orbited the Earth from 1973 to 1979, and included a workshop, a solar observatory, and other systems. It was launched unmanned by a modified Saturn V rocket, with a mass of...
space station, used by NASA between May, 1973 and March, 1974, had an onboard WCS facility which served as a prototype for the Shuttle's WCS, but also featured an onboard shower facility. The Skylab toilet, which was designed and built by the Fairchild Republic Corp. on Long Island, was primarily a medical system to collect and return to earth samples of urine, feces and vomit so that calcium balance in astronauts could be studied.

Even with the facilities, astronauts and cosmonauts for both launch systems employ pre-launch bowel clearing and low-residue diets
Low residue diet
A low residue diet is a diet designed to reduce the frequency and volume of stools while prolonging intestinal transit time. It is similar to a low fiber diet, but typically includes restrictions on foods that increase bowel activity, such as milk, milk products, and prune juice. A low residue diet...
to minimize the need for defecation
Defecation
Defecation is the final act of digestion by which organisms eliminate solid, semisolid or liquid waste material from the digestive tract via the anus. Waves of muscular contraction known as peristalsis in the walls of the colon move fecal matter through the digestive tract towards the rectum...
. The Soyuz toilet has been used on a return mission from Mir
Mir
Mir was a space station operated in low Earth orbit from 1986 to 2001, at first by the Soviet Union and then by Russia. Assembled in orbit from 1986 to 1996, Mir was the first modular space station and had a greater mass than that of any previous spacecraft, holding the record for the...
.

NPP Zvezda
NPP Zvezda
Research & Development Production Enterprise Zvezda, or R&D PE Zvezda is a Russian manufacturer of life-support systems for high-altitude flight and human spaceflight. Its products include space suits, ejector seats, aircraft escape slides, lifejackets and fire extinguishers...
is a Russian developer of space equipment, which includes zero gravity toilets. The unit that failed in 2008 aboard the ISS was of this type.