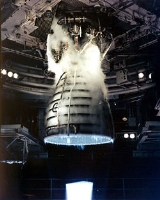 What is the cost of each SSME heat exchanger: both the copper and stainless steel configurations.
More
x