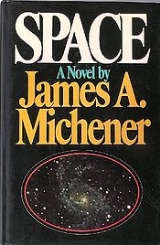 Encyclopedia
Space is a novel by James A. Michener
James A. Michener
James Albert Michener was an American author of more than 40 titles, the majority of which were sweeping sagas, covering the lives of many generations in particular geographic locales and incorporating historical facts into the stories...
published in 1982. It is a fictionalized history of the United States space program, with a particular emphasis on manned spaceflight.

Michener writes in a semi-documentary style. The topics explored in the novel include naval warfare in the Pacific, air combat in the Korean War
Korean War
The Korean War was a conventional war between South Korea, supported by the United Nations, and North Korea, supported by the People's Republic of China , with military material aid from the Soviet Union...
(something Michener had already explored in The Bridges at Toko-Ri
The Bridges at Toko-Ri
The Bridges at Toko-Ri is a 1954 film based on a novel by James Michener about a naval aviator assigned to bomb a group of heavily defended bridges during the Korean War. It was made into a motion picture by Paramount Pictures and won the Special Effects Oscar at the 28th Academy Awards...
), test pilot life at 'Pax River', astronaut
Astronaut
An astronaut or cosmonaut is a person trained by a human spaceflight program to command, pilot, or serve as a crew member of a spacecraft....
selection and training, the role of the media in promoting the space program as a national achievement, and the development of the Gemini
Project Gemini
Project Gemini was the second human spaceflight program of NASA, the civilian space agency of the United States government. Project Gemini was conducted between projects Mercury and Apollo, with ten manned flights occurring in 1965 and 1966....
and Apollo
Project Apollo
The Apollo program was the spaceflight effort carried out by the United States' National Aeronautics and Space Administration , that landed the first humans on Earth's Moon. Conceived during the Presidency of Dwight D. Eisenhower, Apollo began in earnest after President John F...
spacecraft, the rise of the military-industrial complex
Military-industrial complex
Military–industrial complex , or Military–industrial-congressional complex is a concept commonly used to refer to policy and monetary relationships between legislators, national armed forces, and the industrial sector that supports them...
and the evolution of NACA
National Advisory Committee for Aeronautics
The National Advisory Committee for Aeronautics was a U.S. federal agency founded on March 3, 1915 to undertake, promote, and institutionalize aeronautical research. On October 1, 1958 the agency was dissolved, and its assets and personnel transferred to the newly created National Aeronautics and...
into NASA
NASA
The National Aeronautics and Space Administration is the agency of the United States government that is responsible for the nation's civilian space program and for aeronautics and aerospace research...
.

The story begins in 1944 and covers more than 30 years in the lives of four men and their families: Dieter Kolff, a German rocket scientist who worked for the Nazis; Norman Grant, a World War II hero turned U.S. Senator from a fictional state; Stanley Mott, an aeronautical engineer invested with a top-secret U.S. government mission to rescue Kolff from Peenemünde
Peenemünde
The Peenemünde Army Research Center was founded in 1937 as one of five military proving grounds under the Army Weapons Office ....
; and John Pope, a small-town boy turned Naval Aviator
United States Naval Aviator
A United States Naval Aviator is a qualified pilot in the United States Navy, Marine Corps or Coast Guard.-Naming Conventions:Most Naval Aviators are Unrestricted Line Officers; however, a small number of Limited Duty Officers and Chief Warrant Officers are also trained as Naval Aviators.Until 1981...
who becomes a test pilot
Test pilot
A test pilot is an aviator who flies new and modified aircraft in specific maneuvers, known as flight test techniques or FTTs, allowing the results to be measured and the design to be evaluated....
and then astronaut. Randy Claggett, a rambunctious Marine Corps
United States Marine Corps
The United States Marine Corps is a branch of the United States Armed Forces responsible for providing power projection from the sea, using the mobility of the United States Navy to deliver combined-arms task forces rapidly. It is one of seven uniformed services of the United States...
aviator and astronaut is considered by Michener to be the most important supporting character (the first two parts of the book are entitled "Four Men" and "Four Women"). The lives of the fictional characters interweave with those of historical figures, such as Wernher von Braun
Wernher von Braun
Wernher Magnus Maximilian, Freiherr von Braun was a German rocket scientist, aerospace engineer, space architect, and one of the leading figures in the development of rocket technology in Nazi Germany during World War II and in the United States after that.A former member of the Nazi party,...
and Lyndon Johnson. A whole group of trainee astronauts are introduced to fly fictional but plausible Project Gemini
Project Gemini
Project Gemini was the second human spaceflight program of NASA, the civilian space agency of the United States government. Project Gemini was conducted between projects Mercury and Apollo, with ten manned flights occurring in 1965 and 1966....
and Project Apollo
Project Apollo
The Apollo program was the spaceflight effort carried out by the United States' National Aeronautics and Space Administration , that landed the first humans on Earth's Moon. Conceived during the Presidency of Dwight D. Eisenhower, Apollo began in earnest after President John F...
missions; the intensive training and jockeying for position amongst the astronauts forms much of the background of the middle of the novel, reminiscent of a fictional version of Tom Wolfe
Tom Wolfe
Thomas Kennerly "Tom" Wolfe, Jr. is a best-selling American author and journalist. He is one of the founders of the New Journalism movement of the 1960s and 1970s.-Early life and education:...
's The Right Stuff
The Right Stuff (book)
The Right Stuff is a 1979 book by Tom Wolfe about the pilots engaged in U.S. postwar experiments with experimental rocket-powered, high-speed aircraft as well as documenting the stories of the first Project Mercury astronauts selected for the NASA space program...
and the movie as well.

Michener dramatizes the life experiences of these men and their families against the backdrop of the real history of the U.S. space program, depicting their experiences in post-war aviation, the space race
Space Race
The Space Race was a mid-to-late 20th century competition between the Soviet Union and the United States for supremacy in space exploration. Between 1957 and 1975, Cold War rivalry between the two nations focused on attaining firsts in space exploration, which were seen as necessary for national...
between the United States and the Soviet Union; the development of congressional funding for the space program; the early failures in the Gemini program
Project Gemini
Project Gemini was the second human spaceflight program of NASA, the civilian space agency of the United States government. Project Gemini was conducted between projects Mercury and Apollo, with ten manned flights occurring in 1965 and 1966....
; and the successful moon landings in the Apollo program
Project Apollo
The Apollo program was the spaceflight effort carried out by the United States' National Aeronautics and Space Administration , that landed the first humans on Earth's Moon. Conceived during the Presidency of Dwight D. Eisenhower, Apollo began in earnest after President John F...
. In a fictional postscript to history, Michener creates a last, "Apollo 18" launch to further the drama of Pope, Claggett and Linley, America's first black astronaut. This is the only Apollo mission in which the lunar module lands on the far side of the Moon
Far side of the Moon
The far side of the Moon is the lunar hemisphere that is permanently turned away, and is not visible from the surface of the Earth. The far hemisphere was first photographed by the Soviet Luna 3 probe in 1959, and was first directly observed by human eyes when the Apollo 8 mission orbited the Moon...
, unseen by Earth; in order to remain in contact with NASA after landing, while still in lunar orbit the Apollo craft must launch a communication satellite that will bounce the lunar module's signals to Earth. An unusually high amount of sunspot activity, only partially predicted by the NASA ground crew, results in the death of Claggett and Linley in the lunar module when they are exposed to lethal levels of radiation following their ascent back towards the command module and they crash back into the lunar surface; Pope, the command module pilot returns to Earth safely. The mission profile is significantly different from that of the real-world canceled mission that would have been Apollo 18
Apollo 18
Apollo 18 may refer to:* One of the canceled Apollo missions of the American Apollo lunar program* The officially unnumbered Apollo spacecraft used in the Apollo–Soyuz Test Project* Apollo 18 , a 1992 album by They Might Be Giants...
.

On the human side, various subplots run through the novel, contrasting the "official" heroism of NASA with the human fallibilities of the cast—the difficulties the Kolffs face in integrating into American society; Norman Grant's initial embrace of the space program and his abandonment of it as it no longer serves his political aims, while his unstable wife and their daughter fall in with a highly intelligent but cynical cult leader calling himself Leopold Strabismus who exploits first the UFO craze and then an anti-scientific creationist agenda to increase his fortune; Randy Claggett's womanizing; the contrast between Stanley and Rachel Mott's ordered, rational existence and their troubled relationship with their sons, and John Pope's unusual yet supportive relationship with his lawyer wife Penny.

The novel closes with Pope retired from NASA and a respected professor of astronomy, his wife Penny in the Senate, and Mott consulting on "Grand Tour" unmanned missions to the outer solar system. The two men finally attending a NASA workshop discussing the possibility of extraterrestrial life, at which Strabismus privately drops the creationist/fundamentalist persona he has adopted and joins in the intellectual debate on the inevitability of life elsewhere in the Universe.

The author displays extensive knowledge about the intricacies of rocket
Rocket
A rocket is a missile, spacecraft, aircraft or other vehicle which obtains thrust from a rocket engine. In all rockets, the exhaust is formed entirely from propellants carried within the rocket before use. Rocket engines work by action and reaction...
and spacecraft
Spacecraft
A spacecraft or spaceship is a craft or machine designed for spaceflight. Spacecraft are used for a variety of purposes, including communications, earth observation, meteorology, navigation, planetary exploration and transportation of humans and cargo....
systems, which he gained as a member of the Advisory Council to the National Aeronautics and Space Administration from 1979 to 1983.

The novel was adapted into a five-part, 13-hour CBS miniseries
Miniseries
A miniseries , in a serial storytelling medium, is a television show production which tells a story in a limited number of episodes. The exact number is open to interpretation; however, they are usually limited to fewer than a whole season. The term "miniseries" is generally a North American term...
, James A. Michener's Space
Space (miniseries)
Space is a television mini-series created by CBS in 1985. It is based on a novel of the same name by James A. Michener published in 1982. The program is also called "James A. Michener's Space". Like the novel, the mini-series is a fictionalised history of the United States space program...
, starring James Garner
James Garner
James Garner is an American film and television actor, one of the first Hollywood actors to excel in both media. He has starred in several television series spanning a career of more than five decades...
. This television series aired April 14–18, 1985 and won an Emmy Award
Emmy Award
An Emmy Award, often referred to simply as the Emmy, is a television production award, similar in nature to the Peabody Awards but more focused on entertainment, and is considered the television equivalent to the Academy Awards and the Grammy Awards .A majority of Emmys are presented in various...
for film sound mixing.
The source of this article is wikipedia, the free encyclopedia.  The text of this article is licensed under the GFDL.