Encyclopedia
The history of Soviet space exploration
Soviet space program
The Soviet space program is the rocketry and space exploration programs conducted by the former Union of Soviet Socialist Republics from the 1930s until its dissolution in 1991...
has been well documented on the country's stamps
Postage stamps and postal history of Russia
right|thumb|A Russian Empire postman.This a survey of the postage stamps and postal history of the Russian Empire, the Soviet Union and the modern Russian Federation.- Early postal history :Records mention a system of messengers in the 10th century...
. These include not only the notable accomplishments in space flight, including mankind's first satellite
Satellite
In the context of spaceflight, a satellite is an object which has been placed into orbit by human endeavour. Such objects are sometimes called artificial satellites to distinguish them from natural satellites such as the Moon....
, Sputnik 1
Sputnik 1
Sputnik 1 ) was the first artificial satellite to be put into Earth's orbit. It was launched into an elliptical low Earth orbit by the Soviet Union on 4 October 1957. The unanticipated announcement of Sputnik 1s success precipitated the Sputnik crisis in the United States and ignited the Space...
, first animal in space (the dog Laika
Laika
Laika was a Soviet space dog that became the first animal to orbit the Earth – as well as the first animal to die in orbit.As little was known about the impact of spaceflight on living creatures at the time of Laika's mission, and the technology to de-orbit had not yet been developed, there...
on Sputnik 2
Sputnik 2
Sputnik 2 , or Prosteyshiy Sputnik 2 ), was the second spacecraft launched into Earth orbit, on November 3, 1957, and the first to carry a living animal, a dog named Laika. Sputnik 2 was a 4-meter high cone-shaped capsule with a base diameter of 2 meters...
), first human in space and Earth orbit (cosmonaut Yuri Gagarin
Yuri Gagarin
Yuri Alekseyevich Gagarin was a Soviet pilot and cosmonaut. He was the first human to journey into outer space, when his Vostok spacecraft completed an orbit of the Earth on April 12, 1961....
on Vostok 1
Vostok 1
Vostok 1 was the first spaceflight in the Vostok program and the first human spaceflight in history. The Vostok 3KA spacecraft was launched on April 12, 1961. The flight took Yuri Gagarin, a cosmonaut from the Soviet Union, into space. The flight marked the first time that a human entered outer...
), first Moon impact (1959) and unmanned landing, first space station
Space station
A space station is a spacecraft capable of supporting a crew which is designed to remain in space for an extended period of time, and to which other spacecraft can dock. A space station is distinguished from other spacecraft used for human spaceflight by its lack of major propulsion or landing...
, and first interplanetary probe but also more general astronomical observation. 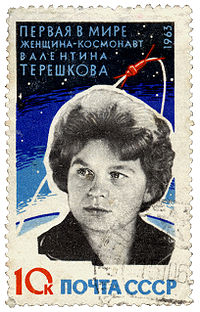