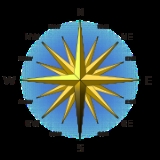 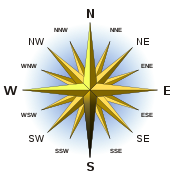 South is a noun
Noun
In linguistics, a noun is a member of a large, open lexical category whose members can occur as the main word in the subject of a clause, the object of a verb, or the object of a preposition .Lexical categories are defined in terms of how their members combine with other kinds of...
, adjective
Adjective
In grammar, an adjective is a 'describing' word; the main syntactic role of which is to qualify a noun or noun phrase, giving more information about the object signified....
, or adverb
Adverb
An adverb is a part of speech that modifies verbs or any part of speech other than a noun . Adverbs can modify verbs, adjectives , clauses, sentences, and other adverbs....
indicating direction
Direction (geometry, geography)
Direction is the information contained in the relative position of one point with respect to another point without the distance information. Directions may be either relative to some indicated reference , or absolute according to some previously agreed upon frame of reference Direction is the...
or geography
Geography
Geography is the science that studies the lands, features, inhabitants, and phenomena of Earth. A literal translation would be "to describe or write about the Earth". The first person to use the word "geography" was Eratosthenes...
.

By convention
Norm (sociology)
Social norms are the accepted behaviors within a society or group. This sociological and social psychological term has been defined as "the rules that a group uses for appropriate and inappropriate values, beliefs, attitudes and behaviors. These rules may be explicit or implicit...
, the bottom side of a map
Map
A map is a visual representation of an area—a symbolic depiction highlighting relationships between elements of that space such as objects, regions, and themes....
is south.

To go south using a compass for navigation
Navigation
Navigation is the process of monitoring and controlling the movement of a craft or vehicle from one place to another. It is also the term of art used for the specialized knowledge used by navigators to perform navigation tasks...
, set a bearing
Bearing (navigation)
In marine navigation, a bearing is the direction one object is from another object, usually, the direction of an object from one's own vessel. In aircraft navigation, a bearing is the actual compass direction of the forward course of the aircraft...
or azimuth of 180°.

True south is the direction towards the southern end of the axis about which the earth
Earth
Earth is the third planet from the Sun, and the densest and fifth-largest of the eight planets in the Solar System. It is also the largest of the Solar System's four terrestrial planets...
rotates, called the South Pole
South Pole
The South Pole, also known as the Geographic South Pole or Terrestrial South Pole, is one of the two points where the Earth's axis of rotation intersects its surface. It is the southernmost point on the surface of the Earth and lies on the opposite side of the Earth from the North Pole...
. The South Pole is located in Antarctica. Magnetic south
Magnetic South
Magnetic South could refer to* Magnetic South Pole* South Pole* Magnetic South an album from Michael Nesmith...
is the direction towards the south magnetic pole
Earth's magnetic field
Earth's magnetic field is the magnetic field that extends from the Earth's inner core to where it meets the solar wind, a stream of energetic particles emanating from the Sun...
, some distance away from the south geographic pole.

The word south is derived from the name of one of the four dwarves in Norse mythology
Norse mythology
Norse mythology, a subset of Germanic mythology, is the overall term for the myths, legends and beliefs about supernatural beings of Norse pagans. It flourished prior to the Christianization of Scandinavia, during the Early Middle Ages, and passed into Nordic folklore, with some aspects surviving...
, Norðri, Suðri, Austri and Vestri
Norðri, Suðri, Austri and Vestri
In Norse mythology, Norðri, Suðri, Austri and Vestri are four dwarves in the Prose Edda book Gylfaginning who each support one of the four cardinal points. Together, they uphold the heavenly dome, created from the skull of the jötunn Ymir...
, who each represented one of the directions of the world. The etymology
Etymology
Etymology is the study of the history of words, their origins, and how their form and meaning have changed over time.For languages with a long written history, etymologists make use of texts in these languages and texts about the languages to gather knowledge about how words were used during...
of South can be traced back to the Old English
Old English language
Old English or Anglo-Saxon is an early form of the English language that was spoken and written by the Anglo-Saxons and their descendants in parts of what are now England and southeastern Scotland between at least the mid-5th century and the mid-12th century...
word suth, related to the Old High German
Old High German
The term Old High German refers to the earliest stage of the German language and it conventionally covers the period from around 500 to 1050. Coherent written texts do not appear until the second half of the 8th century, and some treat the period before 750 as 'prehistoric' and date the start of...
word sund, and perhaps sunne in Old English with sense of "the region of the sun."
The source of this article is wikipedia, the free encyclopedia.  The text of this article is licensed under the GFDL.