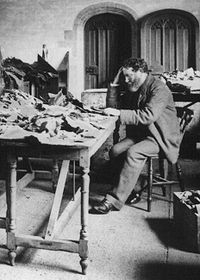 Solomon Schechter was a Moldavia
Moldavia
Moldavia is a geographic and historical region and former principality in Eastern Europe, corresponding to the territory between the Eastern Carpathians and the Dniester river...
n-born Romania
Romania
Romania is a country located at the crossroads of Central and Southeastern Europe, on the Lower Danube, within and outside the Carpathian arch, bordering on the Black Sea...
n and English rabbi
Rabbi
In Judaism, a rabbi is a teacher of Torah. This title derives from the Hebrew word רבי , meaning "My Master" , which is the way a student would address a master of Torah...
, academic scholar, and educator, most famous for his roles as founder and President of the United Synagogue of America, President of the Jewish Theological Seminary of America
Jewish Theological Seminary of America
The Jewish Theological Seminary of America is one of the academic and spiritual centers of Conservative Judaism, and a major center for academic scholarship in Jewish studies.JTS operates five schools: Albert A...
, and architect of the American Conservative Jewish
Conservative Judaism
Conservative Judaism is a modern stream of Judaism that arose out of intellectual currents in Germany in the mid-19th century and took institutional form in the United States in the early 1900s.Conservative Judaism has its roots in the school of thought known as Positive-Historical Judaism,...
movement.

Born in Focşani
Focsani
Focşani is the capital city of Vrancea County in Romania on the shores the Milcov river, in the historical region of Moldavia. It has a population of 101,854.-Geography:...
to a Jewish Romanian
History of the Jews in Romania
The history of Jews in Romania concerns the Jews of Romania and of Romanian origins, from their first mention on what is nowadays Romanian territory....
family adhering to the Chabad
Chabad
Chabad or Chabad-Lubavitch is a major branch of Hasidic Judaism.Chabad may also refer to:*Chabad-Strashelye, a defunct branch of the Chabad school of Hasidic Judaism*Chabad-Kapust or Kapust, a defunct branch of the Chabad school of Hasidic Judaism...
Hasidic
Hasidic Judaism
Hasidic Judaism or Hasidism, from the Hebrew —Ḥasidut in Sephardi, Chasidus in Ashkenazi, meaning "piety" , is a branch of Orthodox Judaism that promotes spirituality and joy through the popularisation and internalisation of Jewish mysticism as the fundamental aspects of the Jewish faith...
branch, he attended yeshiva
Yeshiva
Yeshiva is a Jewish educational institution that focuses on the study of traditional religious texts, primarily the Talmud and Torah study. Study is usually done through daily shiurim and in study pairs called chavrutas...
s in Eastern Europe. Schechter received his early education from his father who was a shochet ("ritual slaughterer"). Reportedly, he learned to read Hebrew
Hebrew language
Hebrew is a Semitic language of the Afroasiatic language family. Culturally, is it considered by Jews and other religious groups as the language of the Jewish people, though other Jewish languages had originated among diaspora Jews, and the Hebrew language is also used by non-Jewish groups, such...
by age three, and by five mastered Chumash. He went to a yeshiva in Piatra Neamţ
Piatra Neamt
Piatra Neamț , , ; is the capital city of Neamţ County, in the historical region of Moldavia, eastern Romania. Because of its privileged location in the Eastern Carpathian mountains, it is considered one of the most picturesque cities in Romania...
at age ten and at age thirteen studied with one of the major Talmud
Talmud
The Talmud is a central text of mainstream Judaism. It takes the form of a record of rabbinic discussions pertaining to Jewish law, ethics, philosophy, customs and history....
ic scholars, Rabbi Joseph Saul Nathanson
Joseph Saul Nathanson
Joseph Saul Nathanson was a Polish rabbi and posek, and a leading rabbinical authority of his day.-Biography:...
of Lemberg
Lviv
Lviv is a city in western Ukraine. The city is regarded as one of the main cultural centres of today's Ukraine and historically has also been a major Polish and Jewish cultural center, as Poles and Jews were the two main ethnicities of the city until the outbreak of World War II and the following...
. In his twenties he went to the Rabbinical College in Vienna
Vienna
Vienna is the capital and largest city of the Republic of Austria and one of the nine states of Austria. Vienna is Austria's primary city, with a population of about 1.723 million , and is by far the largest city in Austria, as well as its cultural, economic, and political centre...
, where he studied under the more modern Talmudic scholar Meir Friedmann
Meir Friedmann
Meir Friedmann was an Austrian-Hungarian Jewish scholar. His editions of the Midrash are the standard texts. His chief editions were the Sifre , the Mekhilta , Pesiqta Rabbathi...
, before in 1879 moving on to undertake further studies at the Berlin Hochschule
Hochschule für die Wissenschaft des Judentums
The Hochschule für die Wissenschaft des Judentums, or Higher Institute for Jewish Studies, was a rabbinical seminary, established in Berlin in 1872 destroyed by the Nazi government of Germany in 1942...
für die Wissenschaft des Judentums
Wissenschaft des Judentums
Wissenschaft des Judentums , refers to a nineteenth-century movement premised on the critical investigation of Jewish literature and culture, including rabbinic literature, using scientific methods to analyze the origins of Jewish traditions.-The Verein für Cultur und Wissenschaft der Juden:The ...
and at the University of Berlin. Three years later he was invited to the UK
United Kingdom of Great Britain and Ireland
The United Kingdom of Great Britain and Ireland was the formal name of the United Kingdom during the period when what is now the Republic of Ireland formed a part of it....
, to be tutor
Tutor
A tutor is a person employed in the education of others, either individually or in groups. To tutor is to perform the functions of a tutor.-Teaching assistance:...
of rabbinics under Claude Montefiore
Claude Montefiore
Claude Joseph Goldsmid Montefiore was son of Nathaniel Montefiore, and the great nephew of Sir Moses Montefiore. Some identify him as a significant figure in the contexts of modern Jewish religious thought, Jewish-Christian relations, and Anglo-Jewish socio-politics.-Education:He was educated at...
in London.

Schechter was alerted to the existence of the Geniza's papers in May 1896 by two Scottish sisters, Mrs. Lewis and Mrs. Gibson
Agnes and Margaret Smith
Agnes Smith Lewis PhD LLD DD LittD and Margaret Dunlop Gibson LLD DD LittD , nées Agnes and Margaret Smith , were Semitic scholars...
, who showed him some leaves from the Geniza that contained the Hebrew text of Sirach, which had for centuries only been known in Greek
Greek language
Greek is an independent branch of the Indo-European family of languages. Native to the southern Balkans, it has the longest documented history of any Indo-European language, spanning 34 centuries of written records. Its writing system has been the Greek alphabet for the majority of its history;...
and Latin
Latin
Latin is an Italic language originally spoken in Latium and Ancient Rome. It, along with most European languages, is a descendant of the ancient Proto-Indo-European language. Although it is considered a dead language, a number of scholars and members of the Christian clergy speak it fluently, and...
translation. Letters, written at Schechter's prompting, by Agnes Smith to The Athenaeum
Athenaeum (magazine)
The Athenaeum was a literary magazine published in London from 1828 to 1921. It had a reputation for publishing the very best writers of the age....
and The Academy
The Academy (periodical)
The Academy was a review of literature and general topics published in London from 1869 to 1902, founded by Charles Appleton.The first issue was published on 9 October 1869 under the title The Academy: A Monthly Record of Literature, Learning, Science, and Art. It was published monthly from Oct....
quickly revealed the existence of another nine leaves of the same manuscript in the possession of Archibald Sayce
Archibald Sayce
The Rev. Archibald Henry Sayce , was a pioneer British Assyriologist and linguist, who held a chair as Professor of Assyriology at the University of Oxford from 1891 to 1919.- Life :...
at Oxford University. Schechter quickly found support for another expedition to the Cairo Geniza, and arrived there in December 1896 with an introduction from the Chief Rabbi, Hermann Adler
Hermann Adler
Rabbi Hermann Adler CVO was the Chief Rabbi of the British Empire from 1891 to 1911. The son of Nathan Marcus Adler, the 1911 Encyclopædia Britannica writes that he "raised the position [of Chief Rabbi] to one of much dignity and importance."Born in Hanover, like his father, he had both a...
, to the Chief Rabbi of Cairo, Aaron Raphael Ben Shim'on. He carefully selected for the Cambridge University Library
Cambridge University Library
The Cambridge University Library is the centrally-administered library of Cambridge University in England. It comprises five separate libraries:* the University Library main building * the Medical Library...
a trove three times the size of any other collection: this is now part of the Taylor-Schechter Collection
Charles Taylor (scholar)
Charles Taylor was an English Christian Hebraist.-Life:He was educated at King's College London, and St. John's College, Cambridge, where graduated BA as 9th wrangler in 1862 and became a fellow of his college in 1864. He became Master of St John's in 1881...
. The find was instrumental in Schechter resolving a dispute with David Margoliouth
David Samuel Margoliouth
David Samuel Margoliouth was an orientalist. He was briefly active as a priest in the Church of England...
as to the likely Hebrew language origins of Sirach.

Charles Taylor took a great interest in Solomon Schechter's work in Cairo, and the genizah
Genizah
A genizah is the store-room or depository in a Jewish synagogue , usually specifically for worn-out Hebrew-language books and papers on religious topics that were stored there before they could receive a proper cemetery burial, it being forbidden to throw away writings...
fragments presented to the University of Cambridge are known as the Taylor-Schechter Collection. He was joint editor with Schechter of The Wisdom of Ben Sira, 1899. He published separately Cairo Genizah Palimpsests, 1900.

Schechter emphasized the centrality of Jewish law
Halakha
Halakha — also transliterated Halocho , or Halacha — is the collective body of Jewish law, including biblical law and later talmudic and rabbinic law, as well as customs and traditions.Judaism classically draws no distinction in its laws between religious and ostensibly non-religious life; Jewish...
(Halakha) in Jewish life in a speech in his inaugural address as President of the JTSA in 1902:

Schechter, on the other hand, believed in what he termed Catholic Israel. The basic idea being that Jewish law, Halacha, is formed and evolves based on the behavior of the people. This concept of modifying the law based on national consensus is an untraditional viewpoint.

It is alleged that Shechter openly violated the prohibitions associated with traditional Shabbat
Shabbat
Shabbat is the seventh day of the Jewish week and a day of rest in Judaism. Shabbat is observed from a few minutes before sunset on Friday evening until a few minutes after when one would expect to be able to see three stars in the sky on Saturday night. The exact times, therefore, differ from...
observance.