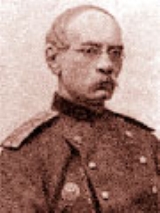 Sokrates Starynkiewicz was born December 18, 1820 in Taganrog
Taganrog
Taganrog is a seaport city in Rostov Oblast, Russia, located on the north shore of Taganrog Bay , several kilometers west of the mouth of the Don River. Population: -History of Taganrog:...
at the Azov Sea, to the family of Ivan Starynkiewicz, a bank owner. In 1836 he joined the Imperial Russian
Russian Empire
The Russian Empire was a state that existed from 1721 until the Russian Revolution of 1917. It was the successor to the Tsardom of Russia and the predecessor of the Soviet Union...
army and graduated from several engineering and artillery schools. After promotion to officer rank he served in various staff posts. Among others, he took part in the Hungarian Campaign and Crimean War
Crimean War
The Crimean War was a conflict fought between the Russian Empire and an alliance of the French Empire, the British Empire, the Ottoman Empire, and the Kingdom of Sardinia. The war was part of a long-running contest between the major European powers for influence over territories of the declining...
, for which he was promoted to colonel in 1858. In 1863, during the January Uprising
January Uprising
The January Uprising was an uprising in the former Polish-Lithuanian Commonwealth against the Russian Empire...
he was retired. Soon afterwards he was promoted to major general and assigned to the Russian Ministry of Interior. Between 1868 and 1871 he was briefly the military governor of Kherson
Kherson
Kherson is a city in southern Ukraine. It is the administrative center of the Kherson Oblast , and is designated as its own separate raion within the oblast. Kherson is an important port on the Black Sea and Dnieper River, and the home of a major ship-building industry...
, but he left that post and became the governor of Prince Anatoliy Demidov's estates near Kiev
Kiev
Kiev or Kyiv is the capital and the largest city of Ukraine, located in the north central part of the country on the Dnieper River. The population as of the 2001 census was 2,611,300. However, higher numbers have been cited in the press....
and in Podolia
Podolia
The region of Podolia is an historical region in the west-central and south-west portions of present-day Ukraine, corresponding to Khmelnytskyi Oblast and Vinnytsia Oblast. Northern Transnistria, in Moldova, is also a part of Podolia...
.

On November 18, 1875, he was appointed the 19th president of Warsaw
Warsaw
Warsaw is the capital and largest city of Poland. It is located on the Vistula River, roughly from the Baltic Sea and from the Carpathian Mountains. Its population in 2010 was estimated at 1,716,855 residents with a greater metropolitan area of 2,631,902 residents, making Warsaw the 10th most...
. Although at first he was considered yet another Russian official assigned to govern a Polish city, he soon became known as a great organiser and engineer. He was also a good economist and during his presidency the city's treasury more than tripled. He became particularly popular with the Varsavians after he started to consult most of his decisions with the press, a thing that was uncommon in 19th century Russia.

Among the most notable public works started by Starynkiewicz were the horse-drawn tram
Tram
A tram is a passenger rail vehicle which runs on tracks along public urban streets and also sometimes on separate rights of way. It may also run between cities and/or towns , and/or partially grade separated even in the cities...
way net, the first telephone
Telephone
The telephone , colloquially referred to as a phone, is a telecommunications device that transmits and receives sounds, usually the human voice. Telephones are a point-to-point communication system whose most basic function is to allow two people separated by large distances to talk to each other...
lines and Bródno cemetery
Bródno Cemetery
Bródno Cemetery is an old cemetery in the Targówek district, in the eastern part of Warsaw, Poland. Occupying an area of , it is the largest cemetery in Warsaw...
. In 1886 he ordered the creation of the first modern sewer
Sanitary sewer
A sanitary sewer is a separate underground carriage system specifically for transporting sewage from houses and commercial buildings to treatment or disposal. Sanitary sewers serving industrial areas also carry industrial wastewater...
and water supply network, with the main hub located in Koszyki area. In 1889 he started the Plantation Committee, which turned many Warsaw's squares and streets into parks. Between 1891 and 1892 more than 2500 trees were planted, 13 parks were refurbished and 47 streets and squares were turned into green areas for all inhabitants of Warsaw. In addition, in 1896 a new Park Ujazdowski
Park Ujazdowski
Ujazdów Park is one of the most picturesque parks of Warsaw, Poland. It borders Aleje Ujazdowskie , with its many embassies and Sejm building.- History :...
was created which remains until now one of the most popular and picturesque parks in Warsaw.

Starynkiewicz also introduced modern gas street lighting, built a modern marketplace (Hala Mirowska) and started construction and paving of streets in the city centre. Finally, he ordered two census
Census
A census is the procedure of systematically acquiring and recording information about the members of a given population. It is a regularly occurring and official count of a particular population. The term is used mostly in connection with national population and housing censuses; other common...
es (in 1882 and 1892).

He retired on October 6, 1892. He decided to stay in Warsaw, where he took active part in various philanthropic societies and organisations, including the Cheap Kitchens Society which provided the poorest inhabitants with food. He died in Warsaw on August 23, 1902. The funeral procession was watched by hundreds of thousands of Varsovians from all walks of life. He is buried in the Orthodox Cemetery in Warsaw
Orthodox Cemetery in Warsaw
, The Orthodox Cemetery in Warsaw is a historic Eastern Orthodox cemetery located in the Wola district, western part of Warsaw, Poland.-Details:...
, the Warsaw borough of Wola
Wola
Wola is a district in western Warsaw, Poland, formerly the village of Wielka Wola, incorporated into Warsaw in 1916. An industrial area with traditions reaching back to the early 19th century, it is slowly changing into an office and residential district...
.