Encyclopedia
Wola (ˈvɔla) is a district
Dzielnica
In the Polish system of local administration, a dzielnica is an administrative subdivision or quarter of a city or town. A dzielnica may have its own elected council , and those of Warsaw each have their own mayor...
in western Warsaw
Warsaw
Warsaw is the capital and largest city of Poland. It is located on the Vistula River, roughly from the Baltic Sea and from the Carpathian Mountains. Its population in 2010 was estimated at 1,716,855 residents with a greater metropolitan area of 2,631,902 residents, making Warsaw the 10th most...
, Poland
Poland
Poland , officially the Republic of Poland , is a country in Central Europe bordered by Germany to the west; the Czech Republic and Slovakia to the south; Ukraine, Belarus and Lithuania to the east; and the Baltic Sea and Kaliningrad Oblast, a Russian exclave, to the north...
, formerly the village of Wielka Wola, incorporated into Warsaw in 1916. An industrial area with traditions reaching back to the early 19th century, it is slowly changing into an office and residential district. Several museums are located in Wola.

First mentioned in the 14th century, it became the site of the elections, from 1573 to 1764, of Polish kings by the szlachta
Szlachta
The szlachta was a legally privileged noble class with origins in the Kingdom of Poland. It gained considerable institutional privileges during the 1333-1370 reign of Casimir the Great. In 1413, following a series of tentative personal unions between the Grand Duchy of Lithuania and the Kingdom of...
(nobility) of the Polish-Lithuanian Commonwealth
Polish-Lithuanian Commonwealth
The Polish–Lithuanian Commonwealth was a dualistic state of Poland and Lithuania ruled by a common monarch. It was the largest and one of the most populous countries of 16th- and 17th‑century Europe with some and a multi-ethnic population of 11 million at its peak in the early 17th century...
.

The Wola district later became famous for the Polish Army's defence of Warsaw in 1794 during the Kościuszko Uprising
Kosciuszko Uprising
The Kościuszko Uprising was an uprising against Imperial Russia and the Kingdom of Prussia led by Tadeusz Kościuszko in Poland, Belarus and Lithuania in 1794...
and in 1831 during the November Uprising
November Uprising
The November Uprising , Polish–Russian War 1830–31 also known as the Cadet Revolution, was an armed rebellion in the heartland of partitioned Poland against the Russian Empire. The uprising began on 29 November 1830 in Warsaw when the young Polish officers from the local Army of the Congress...
, when Józef Sowiński
Józef Sowinski
Józef Sowiński was a Polish artillery general and one of the heroes of Poland's November 1830 Uprising.-Biography:Józef Longin Sowiński was born March 15, 1777 Warsaw, after graduating from the famous Corps of Cadets in Warsaw, he joined the Polish Army as a lieutenant during the Kościuszko Uprising...
and Józef Bem
Józef Bem
Józef Zachariasz Bem was a Polish general, an Ottoman Pasha and a national hero of Poland and Hungary, and a figure intertwined with other European nationalisms...
defended the city against tsarist forces.

During the Warsaw Uprising
Warsaw Uprising
The Warsaw Uprising was a major World War II operation by the Polish resistance Home Army , to liberate Warsaw from Nazi Germany. The rebellion was timed to coincide with the Soviet Union's Red Army approaching the eastern suburbs of the city and the retreat of German forces...
(August-October 1944), fierce battles raged in Wola. Around August 8, Wola was the scene of the largest single massacre
Wola massacre
The Wola massacre was the scene of the largest single massacre in the history of Poland. According to different sources, some 40,000 to 100,000 Polish civilians and POWs were killed by the German forces during their suppression of the Warsaw Uprising...
in Poland of 40,000 to 50,000 civilians. 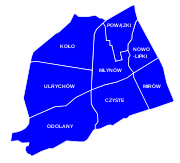 Wola is divided into the neighbourhoods (osiedle
Osiedle
Osiedle is a term used in Poland to denote a designated subdivision of a city or town, or of a dzielnica, with its own council and executive. Like the dzielnica and sołectwo, an osiedle is an auxiliary unit of a gmina. These units are created by decision of the gmina council, and do not have...
) of Czyste
Czyste
Czyste is one of the neighbourhoods of the Wola district of Warsaw, Poland. It is limited by the Wolska, and Towarowa streets from north and east and by railway lines from west and south....
, Koło, Mirów, Młynów, Nowolipki, Odolany, Powązki and Ulrychów neighbourhoods, which in many cases correspond to old villages or settlements.