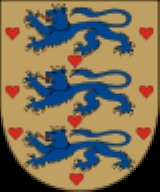 Encyclopedia
Sophia of Denmark (Sofia Eriksdotter; 1241–1286) was Queen consort
Queen consort
A queen consort is the wife of a reigning king. A queen consort usually shares her husband's rank and holds the feminine equivalent of the king's monarchical titles. Historically, queens consort do not share the king regnant's political and military powers. Most queens in history were queens consort...
of Sweden
Sweden
Sweden , officially the Kingdom of Sweden , is a Nordic country on the Scandinavian Peninsula in Northern Europe. Sweden borders with Norway and Finland and is connected to Denmark by a bridge-tunnel across the Öresund....
as the spouse of King Valdemar of Sweden.

Sophia was married to Valdemar I of Sweden
Valdemar I of Sweden
Valdemar, English also Waldemar; , was King of Sweden 1250–1275.-Biography:Valdemar was the son of princess Ingeborg Eriksdotter of Sweden and Birger jarl, from the House of Bjelbo. During the first sixteen years of his reign, it was Birger Jarl who was the real ruler...
in 1261, as part of Birger Jarl
Birger jarl
, or Birger Magnusson, was a Swedish statesman, Jarl of Sweden and a member of the House of Bjelbo, who played a pivotal role in the consolidation of Sweden. Birger also led the Second Swedish Crusade, which established Swedish rule in Finland. Additionally, he is traditionally attributed to have...
's policy of peace between Scandinavian kingdoms. It is said, that when she was informed about the arranged marriage, she left the room, went in to her chamber and asked God: Give me happiness with him and him with me. Sophia was described as a politically interested, witty beauty with a quick tongue. She was also known for her interest in chess
Chess
Chess is a two-player board game played on a chessboard, a square-checkered board with 64 squares arranged in an eight-by-eight grid. It is one of the world's most popular games, played by millions of people worldwide at home, in clubs, online, by correspondence, and in tournaments.Each player...
.

In 1269, Sophia visited her father's grave in Denmark as well as visiting her sisters, Agnes and Jutta, who had both been placed in Agnesklostret convent in Roskilde
Roskilde
Roskilde is the main city in Roskilde Municipality, Denmark on the island of Zealand. It is an ancient city, dating from the Viking Age and is a member of the Most Ancient European Towns Network....
. In 1272, Sophia's sister Jutta visited Sweden and became Valdemar's mistress. The affair resulted in a child born in 1273. The following year, Jutta was again placed in a convent and Valdemar was forced to make a pilgrimage to Rome
Rome
Rome is the capital of Italy and the country's largest and most populated city and comune, with over 2.7 million residents in . The city is located in the central-western portion of the Italian Peninsula, on the Tiber River within the Lazio region of Italy.Rome's history spans two and a half...
to ask for the Pope
Pope
The Pope is the Bishop of Rome, a position that makes him the leader of the worldwide Catholic Church . In the Catholic Church, the Pope is regarded as the successor of Saint Peter, the Apostle...
's absolution. According to legend, Queen Sophia said: I will never recover from this sorrow. Curse the day my sister saw the kingdom of Sweden.

In 1275, Valdemar was deposed by his younger brother, Magnus III of Sweden
Magnus III of Sweden
Magnus III Ladulås of Sweden, Swedish: Magnus Birgersson or Magnus Ladulås was King of Sweden from 1275 until his death in 1290....
after the battle of Hova. The news was said to have reached the queen while she played chess. Many stories are told about her sharp tongue. She is said to have complained about her husband's brothers as "Magnus Ticklingfingers" and "Eric Everything-and-anything". In 1277, Sophia separated from her spouse and returned to Denmark. Her husband lived openly with mistresses in his comfortable prison until his death in 1302. In 1283, the ex-queen gave her income in the fishing of Norrköping
Norrköping
Norrköping is a city in the province of Östergötland in eastern Sweden and the seat of Norrköping Municipality, Östergötland County. The city has a population of 87,247 inhabitants in 2010, out of a municipal total of 130,050, making it Sweden's tenth largest city and eighth largest...
to the Saint Martin Abbey in Skänninge
Skänninge
Skänninge is a locality situated in Mjölby Municipality, Östergötland County, Sweden with 3,242 inhabitants in 2005. It lies about 10 km north of the municipal seat Mjölby....
. This is the first document were the city of Norrköping is mentioned. She died in 1286.

Sofia married Valdemar in 1260 and separated in 1277. They had six children: