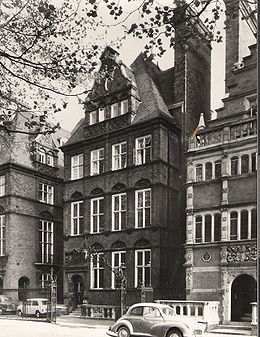 The Society of Genealogists (SoG) is a UK-based educational charity, founded in 1911 to "promote, encourage and foster the study, science and knowledge of genealogy
Genealogy
Genealogy is the study of families and the tracing of their lineages and history. Genealogists use oral traditions, historical records, genetic analysis, and other records to obtain information about a family and to demonstrate kinship and pedigrees of its members...
". The Society's Library is the largest specialist genealogical library outside North America. Membership is open to any adult who agrees to abide by the Society's rules and who pays the annual subscription. At the end of 2010, it had 11,014 members.

Until it purchased 37 Harrington Gardens, South Kensington
South Kensington
South Kensington is a district in the Royal Borough of Kensington and Chelsea in London. It is a built-up area located 2.4 miles west south-west of Charing Cross....
, in 1954, the Society was based in Malet Place, Bloomsbury
Bloomsbury
-Places:* Bloomsbury is an area in central London.* Bloomsbury , related local government unit* Bloomsbury, New Jersey, New Jersey, USA* Bloomsbury , listed on the NRHP in Maryland...
, London. The constant growth of the library and increasingly cramped building forced the Society to also sell this headquarters and move both to 14 Charterhouse Buildings (constructed in 1968 for storing rolls of silk), in Clerkenwell
Clerkenwell
Clerkenwell is an area of central London in the London Borough of Islington. From 1900 to 1965 it was part of the Metropolitan Borough of Finsbury. The well after which it was named was rediscovered in 1924. The watchmaking and watch repairing trades were once of great importance...
, London
London
London is the capital city of :England and the :United Kingdom, the largest metropolitan area in the United Kingdom, and the largest urban zone in the European Union by most measures. Located on the River Thames, London has been a major settlement for two millennia, its history going back to its...
, in July 1984.

The Society possesses the largest family history research library in the United Kingdom, which is open without further charge to members and may be used by non-members on payment of a fee. Holdings include thousands of parish register
Parish register
A parish register is a handwritten volume, normally kept in a parish church or deposited within a county record office or alternative archive repository, in which details of baptisms, marriages and burials are recorded.-History:...
and nonconformist register
Nonconformist register
A Nonconformist register is a parish register of a nonconformist church or chapel.Nonconformist churches are Protestant churches which do not conform to the doctrines of the established Church of England...
copies on microfilm or microfiche or in manuscript, typescript or published form, along with tombstone inscriptions, will
Will (law)
A will or testament is a legal declaration by which a person, the testator, names one or more persons to manage his/her estate and provides for the transfer of his/her property at death...
, marriage licence and census
Census
A census is the procedure of systematically acquiring and recording information about the members of a given population. It is a regularly occurring and official count of a particular population. The term is used mostly in connection with national population and housing censuses; other common...
transcripts and indexes, trade and residential directories and poll books (lists of voters), family histories, biographical dictionaries, works on apprentices and occupations, the armed forces, school and university registers and histories, genealogical journals and many other related works. The library catalogue is available on the Society's web site.

In 2000, the Society made a number of its genealogical datasets available online on the commercial service British Origins, with some free access for Society members. As of 2011 this material is hosted commercially by Findmypast
Find My Past
Find My Past is a leading UK-based online genealogy service owned by UK company Brightsolid. It was awarded the Queen's Award for Innovation in 2007. In October 2011 Find My Past used the new UK product placement legislation opportunites by sponsoring a genealogy TV series...
with a separate free service to members run by the Society itself on its own web site.

The emphasis is on British
United Kingdom
The United Kingdom of Great Britain and Northern IrelandIn the United Kingdom and Dependencies, other languages have been officially recognised as legitimate autochthonous languages under the European Charter for Regional or Minority Languages...
, British Empire
British Empire
The British Empire comprised the dominions, colonies, protectorates, mandates and other territories ruled or administered by the United Kingdom. It originated with the overseas colonies and trading posts established by England in the late 16th and early 17th centuries. At its height, it was the...
and Commonwealth
Commonwealth of Nations
The Commonwealth of Nations, normally referred to as the Commonwealth and formerly known as the British Commonwealth, is an intergovernmental organisation of fifty-four independent member states...
sources but the Society has some sources for most parts of the world.

The society runs a programme of lectures, visits and courses every year, and publishes textbooks, indexes and a quarterly journal, Genealogists' Magazine. The latter is currently edited by Michael Gandy.