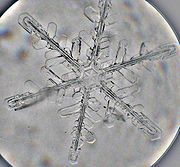 Snowflakes are conglomerations of frozen ice crystals which fall through the Earth's atmosphere
Earth's atmosphere
The atmosphere of Earth is a layer of gases surrounding the planet Earth that is retained by Earth's gravity. The atmosphere protects life on Earth by absorbing ultraviolet solar radiation, warming the surface through heat retention , and reducing temperature extremes between day and night...
. They begin as snow
Snow
Snow is a form of precipitation within the Earth's atmosphere in the form of crystalline water ice, consisting of a multitude of snowflakes that fall from clouds. Since snow is composed of small ice particles, it is a granular material. It has an open and therefore soft structure, unless packed by...
crystals which develop when microscopic supercooled
Supercooling
Supercooling, also known as undercooling, is the process of lowering the temperature of a liquid or a gas below its freezing point without it becoming a solid....
cloud droplets freeze
Freezing
Freezing or solidification is a phase change in which a liquid turns into a solid when its temperature is lowered below its freezing point. The reverse process is melting....
. Snowflakes come in a variety of sizes and shapes. Complex shapes emerge as the flake moves through differing temperature and humidity regimes. Individual snowflakes are nearly unique in structure. Types which fall in the form of a ball due to melting and refreezing, rather than a flake, are known as graupel, with ice pellets and snow grains as examples of graupel.

Snow crystals form when tiny supercooled cloud droplets (about 10 μm in diameter) freeze
Freezing
Freezing or solidification is a phase change in which a liquid turns into a solid when its temperature is lowered below its freezing point. The reverse process is melting....
. These droplets are able to remain liquid at temperatures lower than -18 °C, because to freeze, a few molecules in the droplet need to get together by chance to form an arrangement similar to that in an ice lattice; then the droplet freezes around this "nucleus." Experiments show that this "homogeneous" nucleation of cloud droplets only occurs at temperatures lower than -35 °C. In warmer clouds an aerosol particle or "ice nucleus" must be present in (or in contact with) the droplet to act as a nucleus. The particles that make ice nuclei are very rare compared to nuclei upon which liquid cloud droplets form, however it is not understood what makes them efficient. Clays, desert dust and biological particles may be effective, although to what extent is unclear. Artificial nuclei include particles of silver iodide
Silver iodide
Silver iodide is a yellow, inorganic, photosensitive iodide of silver used in photography, in medicine as an antiseptic, and in rainmaking for cloud seeding.-Crystal structure:...
and dry ice
Dry ice
Dry ice, sometimes referred to as "Cardice" or as "card ice" , is the solid form of carbon dioxide. It is used primarily as a cooling agent. Its advantages include lower temperature than that of water ice and not leaving any residue...
, and these are used to stimulate precipitation in cloud seeding
Cloud seeding
Cloud seeding, a form of intentional weather modification, is the attempt to change the amount or type of precipitation that falls from clouds, by dispersing substances into the air that serve as cloud condensation or ice nuclei, which alter the microphysical processes within the cloud...
.

Once a droplet has frozen, it grows in the supersaturated environment, which is one where air is saturated with respect to ice when the temperature is below the freezing point. The droplet then grows by deposition
Deposition (physics)
Deposition is a process in which gas transforms into solid . The reverse of deposition is sublimation.One example of deposition is the process by which, in sub-freezing air, water vapor changes directly to ice without first becoming a liquid...
of water molecules in the air (vapor) onto the ice crystal surface where they are collected. Because water droplets are so much more numerous than the ice crystals due to their sheer abundance, the crystals are able to grow to hundreds of micrometer
Micrometer
A micrometer , sometimes known as a micrometer screw gauge, is a device incorporating a calibrated screw used widely for precise measurement of small distances in mechanical engineering and machining as well as most mechanical trades, along with other metrological instruments such as dial, vernier,...
s or millimeters in size at the expense of the water droplets. This process is known as the Wegner-Bergeron-Findeison process. The corresponding depletion of water vapor causes the droplets to evaporate, meaning that the ice crystals grow at the droplets' expense. These large crystals are an efficient source of precipitation, since they fall through the atmosphere due to their mass, and may collide and stick together in clusters, or aggregates. These aggregates are snowflakes, and are usually the type of ice particle that falls to the ground. Guinness World Records list the world's largest snowflakes as those of January 1887 at Fort Keogh
Fort Keogh
Fort Keogh is located on the western edge of Miles City, Montana. Occasionally spelled Fort Keough. Originally a military post, today it is a United States Department of Agriculture livestock and range research station. It is listed on the National Register of Historic Places...
, Montana
Montana
Montana is a state in the Western United States. The western third of Montana contains numerous mountain ranges. Smaller, "island ranges" are found in the central third of the state, for a total of 77 named ranges of the Rocky Mountains. This geographical fact is reflected in the state's name,...
; allegedly one measured 38 cm (15 inches) wide.

The exact details of the sticking mechanism remain controversial. Possibilities include mechanical interlocking, sintering
Sintering
Sintering is a method used to create objects from powders. It is based on atomic diffusion. Diffusion occurs in any material above absolute zero, but it occurs much faster at higher temperatures. In most sintering processes, the powdered material is held in a mold and then heated to a temperature...
, electrostatic attraction as well as the existence of a "sticky" liquid-like layer on the crystal surface. The individual ice crystals often have hexagonal symmetry. Although the ice is clear, scattering of light by the crystal facets and hollows/imperfections mean that the crystals often appear white in color due to diffuse reflection
Diffuse reflection
Diffuse reflection is the reflection of light from a surface such that an incident ray is reflected at many angles rather than at just one angle as in the case of specular reflection...
of the whole spectrum
Spectrum
A spectrum is a condition that is not limited to a specific set of values but can vary infinitely within a continuum. The word saw its first scientific use within the field of optics to describe the rainbow of colors in visible light when separated using a prism; it has since been applied by...
of light
Light
Light or visible light is electromagnetic radiation that is visible to the human eye, and is responsible for the sense of sight. Visible light has wavelength in a range from about 380 nanometres to about 740 nm, with a frequency range of about 405 THz to 790 THz...
by the small ice particles.

A non-aggregated snowflake often exhibits six-fold "radial" symmetry. The initial symmetry can occur because the crystalline structure of ice is six-fold. The six "arms" of the snowflake then grow independently, and each side of each arm grows independently. Most snowflakes are not completely symmetric. The micro-environment in which the snowflake grows changes dynamically as the snowflake falls through the cloud, and tiny changes in temperature and humidity affect the way in which water molecules attach to the snowflake. Since the micro-environment (and its changes) are very nearly identical around the snowflake, each arm can grow in nearly the same way. However, being in the same micro-environment does not guarantee that each arm grows the same; indeed, for some crystal forms it does not because the underlying crystal growth mechanism also affects how fast each surface region of a crystal grows.

Snowflakes form in a wide variety of intricate shapes, leading to the popular expression that "no two are alike". Although statistically possible, it is very unlikely for any two snowflakes to appear exactly alike due to the many changes in temperature and humidity the crystal experiences during its fall to earth. Initial attempts to find identical snowflakes by photographing
Photography
Photography is the art, science and practice of creating durable images by recording light or other electromagnetic radiation, either electronically by means of an image sensor or chemically by means of a light-sensitive material such as photographic film...
thousands of them with a microscope
Microscope
A microscope is an instrument used to see objects that are too small for the naked eye. The science of investigating small objects using such an instrument is called microscopy...
from 1885 onward by Wilson Alwyn Bentley
Wilson Bentley
Wilson Alwyn "Snowflake" Bentley , born in Jericho, Vermont, United States is one of the first known photographers of snowflakes. He perfected a process of catching flakes on black velvet in such a way that their images could be captured before they either melted or sublimed.-Biography:Bentley was...
found the wide variety of snowflakes we know about today. It is more likely that two snowflakes could become virtually identical if their environments were similar enough. Matching snow crystals were discovered in Wisconsin in 1988. The crystals were not flakes in the usual sense but rather hollow hexagonal prism
Prism (geometry)
In geometry, a prism is a polyhedron with an n-sided polygonal base, a translated copy , and n other faces joining corresponding sides of the two bases. All cross-sections parallel to the base faces are the same. Prisms are named for their base, so a prism with a pentagonal base is called a...
s.


Use as a symbol

The snowflake is often a traditional seasonal image/motif used around the Christmas
Christmas
Christmas or Christmas Day is an annual holiday generally celebrated on December 25 by billions of people around the world. It is a Christian feast that commemorates the birth of Jesus Christ, liturgically closing the Advent season and initiating the season of Christmastide, which lasts twelve days...
period, especially in Europe and the United States, representing the traditional White Christmas
White Christmas
A white Christmas refers to the presence of snow on Christmas Day. This phenomenon is most common in the northern countries of the Northern Hemisphere...
. During this period it is quite popular to make paper snowflakes by folding a piece of paper several times, cutting out a pattern with scissors and then unfolding it.

Snowflakes are also often used as symbols representing winter or cold conditions. For example, snow tire
Tire
A tire or tyre is a ring-shaped covering that fits around a wheel rim to protect it and enable better vehicle performance by providing a flexible cushion that absorbs shock while keeping the wheel in close contact with the ground...
s which enhance traction during harsh winter driving conditions are labelled with a snowflake on the mountain symbol. A snowflake was the symbol of the 2002 Winter Olympic Games in Salt Lake City, Utah
Salt Lake City, Utah
Salt Lake City is the capital and the most populous city of the U.S. state of Utah. The name of the city is often shortened to Salt Lake or SLC. With a population of 186,440 as of the 2010 Census, the city lies in the Salt Lake City metropolitan area, which has a total population of 1,124,197...
.