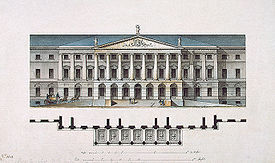 The building was commissioned from Giacomo Quarenghi
Giacomo Quarenghi
Giacomo Quarenghi was the foremost and most prolific practitioner of Palladian architecture in Imperial Russia, particularly in Saint Petersburg.- Career in Italy :...
by the Society for Education of Noble Maidens and constructed in 1806-08 to house the Smolny Institute for Noble Maidens
Institute for Noble Maidens
Institute for Noble Maidens was a type of educational institution, finishing school in late Imperial Russia. It was devised by Ivan Betskoy as a girl-only institution for girls of noble origin. The first and most famous of these was the Smolny Institute in St.Petersburg.-Institutes for Noble...
, established at the urging of Ivan Betskoy
Ivan Betskoy
Ivan Ivanovich Betskoi or Betskoy was a Russian school reformer who served as Catherine II's advisor on education and President of the Imperial Academy of Arts for thirty years...
and in accordance with a decree of Catherine II (the Great) in 1764, borrowing its name from the nearby Smolny Convent
Smolny Convent
Smolny Convent or Smolny Convent of the Resurrection , located on Ploschad Rastrelli, on the bank of the River Neva in Saint Petersburg, Russia, consists of a cathedral and a complex of buildings surrounding it, originally intended for a convent.-History:This Russian Orthodox convent was built to...
. The Smolny was Russia's first educational establishment for women and continued to function under the personal patronage of the Russian Empress until just before the 1917 revolution. A nice garden and iron-work grille around the institute date from the early 19th century.

In 1917, the building was chosen by Vladimir Lenin
Vladimir Lenin
Vladimir Ilyich Lenin was a Russian Marxist revolutionary and communist politician who led the October Revolution of 1917. As leader of the Bolsheviks, he headed the Soviet state during its initial years , as it fought to establish control of Russia in the Russian Civil War and worked to create a...
as Bolshevik
Bolshevik
The Bolsheviks, originally also Bolshevists , derived from bol'shinstvo, "majority") were a faction of the Marxist Russian Social Democratic Labour Party which split apart from the Menshevik faction at the Second Party Congress in 1903....
headquarters during the October Revolution
October Revolution
The October Revolution , also known as the Great October Socialist Revolution , Red October, the October Uprising or the Bolshevik Revolution, was a political revolution and a part of the Russian Revolution of 1917...
. It was Lenin's residence for several months, until the national government was moved to the Moscow Kremlin
Moscow Kremlin
The Moscow Kremlin , sometimes referred to as simply The Kremlin, is a historic fortified complex at the heart of Moscow, overlooking the Moskva River , Saint Basil's Cathedral and Red Square and the Alexander Garden...
. After that, the Smolny became the headquarters of the local Communist Party apparat
Apparat
Apparat can mean:* Apparatchik, a functionary in the Soviet Union* Apparat , Sascha Ring, a German electronic musician* Apparat Organ Quartet, an Icelandic band* Apparat Singles Group, a fictional comic book publisher...
, effectively the city hall. In 1927, a monument to Lenin was erected in front of the building, designed by the sculptor Vasily Kozlov
Vasily Kozlov
Vasily Vasilyevich Kozlov was a Soviet sculptor.-Life:The son of a peasant, Kozlov was born and raised in a small village in Saratov Oblast. In 1898 his family emigrated to Petersburg, where Vasily studied in Company's of encouragement of painters School...
and the architects Vladimir Shchuko and Vladimir Gelfreikh.

This was the site of Sergei Kirov's assassination in 1934. After 1991, the Smolny was used as the seat of the city mayor (governor after 1996) and city administration
Saint Petersburg City Administration
Saint Petersburg City Administration is the superior executive body of Saint Petersburg , Russian Federation. It is located in a historic building, Smolny....
. Vladimir Putin
Vladimir Putin
Vladimir Vladimirovich Putin served as the second President of the Russian Federation and is the current Prime Minister of Russia, as well as chairman of United Russia and Chairman of the Council of Ministers of the Union of Russia and Belarus. He became acting President on 31 December 1999, when...
worked there from 1991 to 1997 in the administration of Anatoly Sobchak
Anatoly Sobchak
Anatoly Alexandrovich Sobchak was a Russian politician, a co-author of the Constitution of the Russian Federation, the first democratically elected mayor of Saint Petersburg, and a mentor and teacher of both Vladimir Putin and Dmitry Medvedev....
.

The name "Smolny" derives from the location, in the early days of St. Petersburg the place at the edge of the city where pitch ("smola" in Russian) was processed for use in shipbuilding and maintenance. As a result the locale was called "smolny" - the place of pitch.