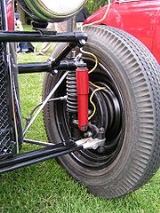 Encyclopedia
A sliding pillar suspension
Suspension (vehicle)
Suspension is the term given to the system of springs, shock absorbers and linkages that connects a vehicle to its wheels. Suspension systems serve a dual purpose — contributing to the car's roadholding/handling and braking for good active safety and driving pleasure, and keeping vehicle occupants...
is a form of independent front suspension for light cars. The stub axle and wheel assembly are attached to a vertical pillar or kingpin which slides up and down through a bush or bushes which are attached to the vehicle chassis, usually as part of transverse outrigger assemblies, sometimes resembling a traditional beam axle, although fixed rigidly to the chassis. Steering movement is provided by allowing this same sliding pillar to also rotate.

Sliding pillar independent suspension was first used by Decauville in 1898, the first recorded instance of independent front suspension on a motor vehicle. In this system, the stub axle carrying the wheel was fixed to the bottom of a pillar which slid up and down through a bush in a transverse axle fixed to the front of the chassis. The top of the pillar was fixed and pivoted on a transverse semi-elliptic leaf spring
Leaf spring
Originally called laminated or carriage spring, a leaf spring is a simple form of spring, commonly used for the suspension in wheeled vehicles...
. This system was copied by Sizaire-Naudin
Sizaire-Naudin
Sizaire Frères et Naudin was a French automobile manufacturer based in Paris between 1905 and 1921.Sizaire-Naudin was founded by Maurice and Georges Sizaire and Louis Naudin in around 1900. The company was registered in 1903...
a few years later.

In around 1904, the New Jersey
New Jersey
New Jersey is a state in the Northeastern and Middle Atlantic regions of the United States. , its population was 8,791,894. It is bordered on the north and east by the state of New York, on the southeast and south by the Atlantic Ocean, on the west by Pennsylvania and on the southwest by Delaware...
inventor, J. Walter Christie
J. Walter Christie
John Walter Christie was an American engineer and inventor. He is best known for developing the Christie suspension system used in a number of World War II-era tank designs, most notably the Soviet BT and T-34 series, and the British Covenanter and Crusader Cruiser tanks, as well as the Comet...
introduced a sliding pillar suspension system with vertical coil springs, which would appear to be the inspiration for that used by Lancia
Lancia
Lancia Automobiles S.p.A. is an Italian automobile manufacturer founded in 1906 by Vincenzo Lancia and which became part of the Fiat Group in 1969. The company has a long history of producing distinctive cars and also has a strong rally heritage. Some modern Lancias are seen as presenting a more...
on its Lambda
Lancia Lambda
The Lancia Lambda is an innovative automobile produced from 1922 through 1931. It was the first car to feature a load-bearing monocoque-type body, and it also pioneered the use of an independent suspension . Vincenzo Lancia even invented a shock absorber for the car and it had excellent four wheel...
from around 1922. Lancia continued with sliding pillar suspension until the 1950s Appia
Lancia Appia
The Lancia Appia was a car introduced in 1953 as a replacement for the Ardea and in production for 10 years. The Appia was the last in a long line of Lancia production cars dating back to the Lancia Lambda to use the famous sliding pillar front suspension...
. In turn, this was copied by Nash
Nash Motors
Also see: Kelvinator and American Motors CorporationNash Motors was an automobile manufacturer based in Kenosha, Wisconsin, in the United States from 1916 to 1938. From 1938 to 1954, Nash was the automotive division of the Nash-Kelvinator Corporation...
for its 600 model for one year, perhaps because each of these cars was the first in its country constructed using the very light unibody technique. 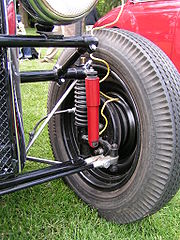 Sliding pillar suspension systems have also been used by several cyclecar
Cyclecar
Cyclecars were small, generally inexpensive cars manufactured mainly between 1910 and the late 1920s.-General description:Cyclecars were propelled by single cylinder, V-twin or more rarely four cylinder engines, often air cooled. Sometimes these had been originally used in motorcycles and other...
manufacturers, the French maker Tracta
Tracta
Tracta was a French car maker based in Asnières, Seine, that was active between 1926 and 1934 . They were pioneers of front wheel drive vehicles....
, and in several prototype vehicles.

In 1909 H.F.S. Morgan
H.F.S. Morgan
Henry Frederick Stanley Morgan known as H.F.S. was an English sports car manufacturer and founder of the Morgan Motor Company and its Chairman from 1937 until his death in 1959....
introduced a superficially similar system using a sliding stub axle on a fixed pillar, used first on Morgan Motor Company
Morgan Motor Company
The Morgan Motor Company is a British motor car manufacturer. The company was founded in 1910 by Harry Frederick Stanley Morgan, generally known as "HFS" and was run by him until he died, aged 77, in 1959. Peter Morgan, son of H.F.S., ran the company until a few years before his death in 2003...
cyclecars, then on their cars up to the current time. The Morgan design is an inverted sliding pillar, as are most of the later designs; the pillar is attached to the chassis and the stub axle is carried by the sliding sleeve over this.

A drawback of the sliding pillar system is that the track
Axle track
The axle track in automobiles and other wheeled vehicles which have two or more wheels on an axle, is the distance between the centreline of two roadwheels on the same axle, each on the other side of the vehicle...
changes with suspension movement, particularly where the track is narrow (as for cyclecars) in relation to suspension travel. The effective track is the hypotenuse AC or AD of the triangle ABC, where AB is the fixed pillar spacing. This track change increases tyre scrub.
The source of this article is wikipedia, the free encyclopedia.  The text of this article is licensed under the GFDL.