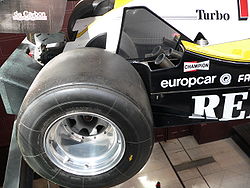 A slick tyre is a type of tyre
Tire
A tire or tyre is a ring-shaped covering that fits around a wheel rim to protect it and enable better vehicle performance by providing a flexible cushion that absorbs shock while keeping the wheel in close contact with the ground...
that has no tread
Tread
The tread of a tire or track refers to the rubber on its circumference that makes contact with the road. As tires are used, the tread is worn off, limiting its effectiveness in providing traction. A worn tire tread can often be retreaded. The word tread is often used incorrectly to refer to the...
pattern, used mostly in auto racing
Auto racing
Auto racing is a motorsport involving the racing of cars for competition. It is one of the world's most watched televised sports.-The beginning of racing:...
. The first production "slick tyre" was developed by a company called M&H Tires in the early 1950s for use in drag racing. By eliminating any grooves cut into the tread, such tyres provide the largest possible contact patch
Contact patch
Contact patch is the portion of a vehicle's tire that is in actual contact with the road surface. It is most commonly used in the discussion of pneumatic tires, , where the term is strictly used to describe the portion of the tire’s tread that touches the road surface...
to the road, and maximize traction
Traction (engineering)
Traction refers to the maximum frictional force that can be produced between surfaces without slipping.The units of traction are those of force, or if expressed as a coefficient of traction a ratio.-Traction:...
for any given tyre dimension. Slick tyres are used on road
Road racing
Road racing is a general term for most forms of motor racing held on paved, purpose-built race tracks , as opposed to oval tracks and off-road racing...
or oval track racing, where steering and braking require maximum traction from each wheel, but are typically used on only the driven (powered) wheels in drag racing
Drag racing
Drag racing is a competition in which specially prepared automobiles or motorcycles compete two at a time to be the first to cross a set finish line, from a standing start, in a straight line, over a measured distance, most commonly a ¼-mile straight track....
, where the only concern is maximum traction to put power to the ground.

Slick tyres are not suitable for use on common road vehicles, which must be able to operate in all weather conditions. They are used in auto racing where competitors can choose different tyres based on the weather conditions and can often change tyres during a race.
Slick tyres provide far more traction than grooved tyres on dry roads, due to their greater contact area but typically have far less traction than grooved tyres under wet conditions. Wet roads severely diminish the traction because of aquaplaning due to water trapped between the tyre contact area and the road surface. Grooved tyres are designed to remove water from the contact area through the grooves, thereby maintaining traction even in wet conditions.

Since there is no tread pattern, slick tyre tread does not deform too much under load. The reduced deformation allows the tyre to be constructed of softer compounds without excessive overheating and blistering. The softer rubber gives greater adhesion to the road surface, but it also has a lower treadwear rating
Treadwear rating
The Treadwear Grade of a tire is the numeric portion of the Uniform Tire Quality Grade Standards that are printed on the sidewall of a tire. These standards were enacted by the National Highway Traffic Safety Administration , which is part of the United States Department of Transportation...
; i.e. it wears out much more quickly than the harder rubber tyres used for driving on the streets. It is not uncommon for drivers in some autosports to wear out multiple sets of tyres during a single day's driving.

The first drag racing slick was developed by a company called M&H Tires (Marvin & Harry Tires) in the early 1950s. It was the only company in the world that produced and sold original drag racing tyres. Later, competitors stole or reverse-engineered moulds, and began making their own tyres.

Drag racing slicks vary in size, from slicks used on motorcycles to very wide ones used on Top Fuel Dragsters. For "closed wheel" cars, often the car must be modified merely to account for the size of the slick, raising the body on the rear springs for the height of narrower slicks, and/or replacing the rear wheel housings with very wide "tubs" and narrowing the rear axle to allow room for the wider varieties of tyres. Open wheel dragsters are freed from any such constraint, and can go to enormous tyre sizes (the opposite of tripodal which are quite minuscule). Some use very low pressures to maximize the tread contact area, producing the typical sidewall appearance which leads to their being termed "wrinklewall" slicks. Inner tubes are typically used, to ensure that the air does not suddenly leak catastrophically as the tyre deforms under the stress of launching.

"Wrinklewall" slicks are now specifically designed for the special requirements of drag racing, being constructed in such a way as to allow the sidewall to be twisted by the torque applied at launch, softening the initial start and thus reducing the chances of breaking traction. As speed builds, the centrifugal force generated by the tyre's rotation "unwraps" the sidewall, returning the energy to the car's acceleration. Additionally, it causes the tyres to expand radially, increasing their diameter and effectively creating a taller gear ratio
Gear ratio
The gear ratio of a gear train is the ratio of the angular velocity of the input gear to the angular velocity of the output gear, also known as the speed ratio of the gear train. The gear ratio can be computed directly from the numbers of teeth of the various gears that engage to form the gear...
, allowing a higher top speed with the same transmission
Transmission (mechanics)
A machine consists of a power source and a power transmission system, which provides controlled application of the power. Merriam-Webster defines transmission as: an assembly of parts including the speed-changing gears and the propeller shaft by which the power is transmitted from an engine to a...
gearing.

Since completely slick tyres are outlawed on most roads due to their inability to handle wet pavement, the "cheater slick" became a popular item in the hot rod
Hot rod
Hot rods are typically American cars with large engines modified for linear speed. The origin of the term "hot rod" is unclear. One explanation is that the term is a contraction of "hot roadster," meaning a roadster that was modified for speed. Another possible origin includes modifications to or...
world in the 1960s; a typical slick type tyre, but engraved with the absolute minimal amount of tread grooves required to satisfy legal requirements. Since then, however, tyre development has progressed greatly, so that today's hot rod street cars typically use wide, grooved tyres which perform better than the slicks of the past; while the cheater slicks available today, both for nostalgic appearance of street cars and for competition use in classes where DOT
United States Department of Transportation
The United States Department of Transportation is a federal Cabinet department of the United States government concerned with transportation. It was established by an act of Congress on October 15, 1966, and began operation on April 1, 1967...
approved street tyres are required, have followed their own line of development, diverging from true slick tyre construction to become a distinct tyre design in themselves.

The development in cheater slick technology has affected the development of tyres for racing series other than drag racing as well. When other forms of auto racing similarly instituted classes which require DOT approved street tyres, some manufacturers similarly began to market tyres which superficially resembled their high performance street tyres, but with the least tread permissible and with very soft, sticky rubber, intended specifically for competition because the soft tread would wear too quickly for street use. These became known, loosely, as R compound tyres. With additional years of progress, this class of tyre has in its turn followed its own line of development, to the point where they have little in common with true street tyres of the same brand. Ironically, this has led to new classes of racing which require not only DOT approval, but also a minimum treadwear rating
Treadwear rating
The Treadwear Grade of a tire is the numeric portion of the Uniform Tire Quality Grade Standards that are printed on the sidewall of a tire. These standards were enacted by the National Highway Traffic Safety Administration , which is part of the United States Department of Transportation...
, in an effort to eliminate the R compound tyres from competition and require "true" street tyres.

In contrast, many bicycle tyres
Bicycle tire
A bicycle tire is a tire that fits on the wheel of a bicycle, unicycle, tricycle, quadracycle, bicycle trailer, or trailer bike. They may also be used on wheelchairs and handcycles, especially for racing...
made for street use are slick. Aquaplaning does not present a problem for bicycles due to their narrower width, higher pressure, lower speed, and circular cross section (due to the need to lean the bicycle in turns), the bicycle tyre can penetrate the water layer to contact the road much more easily; in practice, grooved bicycle tyres do not outperform slick tyres on wet roads. However, many low and medium performance bicycle tyres have substantial tread depth, because the bicycles are designed with off-road excursions in mind, in dirt, gravel, or sand the tread provides significantly improved traction. In addition, high performance bicycle tyres, although designed for road use only, often have a very fine tread pattern, which appears to provide no difference in performance versus a slick tyre and is only there for marketing purposes and as a tyre-wear indicator. This is clear not only from direct testing of tyres, but also from the fact that the texture of the road is itself coarser than the supposed "tread" on these tyres. Some grooveless designs have small "holes" or dimples embedded in the tread as a tyre-wear indicator. This is similar to automobile tyre-wear indicator bars, which contact the road when the tyre is worn to a low tread amount, making the tyre noisy on the road.