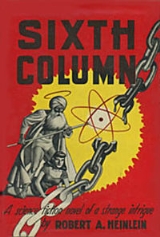 Encyclopedia
Sixth Column, also known under the title The Day After Tomorrow, is a science fiction
Science fiction
Science fiction is a genre of fiction dealing with imaginary but more or less plausible content such as future settings, futuristic science and technology, space travel, aliens, and paranormal abilities...
novel
Novel
A novel is a book of long narrative in literary prose. The genre has historical roots both in the fields of the medieval and early modern romance and in the tradition of the novella. The latter supplied the present generic term in the late 18th century....
by Robert A. Heinlein
Robert A. Heinlein
Robert Anson Heinlein was an American science fiction writer. Often called the "dean of science fiction writers", he was one of the most influential and controversial authors of the genre. He set a standard for science and engineering plausibility and helped to raise the genre's standards of...
, based on a story by editor John W. Campbell
John W. Campbell
John Wood Campbell, Jr. was an influential figure in American science fiction. As editor of Astounding Science Fiction , from late 1937 until his death, he is generally credited with shaping the so-called Golden Age of Science Fiction.Isaac Asimov called Campbell "the most powerful force in...
, and set in a United States
United States
The United States of America is a federal constitutional republic comprising fifty states and a federal district...
that has been conquered by the PanAsians, a combination of Chinese
China
Chinese civilization may refer to:* China for more general discussion of the country.* Chinese culture* Greater China, the transnational community of ethnic Chinese.* History of China* Sinosphere, the area historically affected by Chinese culture...
and Japan
Japan
Japan is an island nation in East Asia. Located in the Pacific Ocean, it lies to the east of the Sea of Japan, China, North Korea, South Korea and Russia, stretching from the Sea of Okhotsk in the north to the East China Sea and Taiwan in the south...
ese. Originally published as a serial in Astounding Science Fiction (January, February, March 1941, as by Anson MacDonald) it was published in hardcover in 1949.

A top secret research facility hidden in the Colorado
Colorado
Colorado is a U.S. state that encompasses much of the Rocky Mountains as well as the northeastern portion of the Colorado Plateau and the western edge of the Great Plains...
mountains is the last remaining outpost of the United States Army
United States Army
The United States Army is the main branch of the United States Armed Forces responsible for land-based military operations. It is the largest and oldest established branch of the U.S. military, and is one of seven U.S. uniformed services...
after its defeat by the PanAsians
Pan-Asianism
Pan-Asianism is an ideology or a movement that Asian nations unite and solidify and create a continental identity to defeat the designs of the Western nations to perpetuate hegemony.-Japanese Asianism:...
. The conquerors had absorbed the Soviets
Soviet Union
The Soviet Union , officially the Union of Soviet Socialist Republics , was a constitutionally socialist state that existed in Eurasia between 1922 and 1991....
after being attacked by them and had then gone on to absorb India
India
India , officially the Republic of India , is a country in South Asia. It is the seventh-largest country by geographical area, the second-most populous country with over 1.2 billion people, and the most populous democracy in the world...
as well. The invaders are depicted as ruthless and cruel—for example, they crush an abortive rebellion by killing 150,000 American civilians as punishment.

The laboratory is in turmoil as the novel begins. All but six of the personnel have died suddenly, due to unknown forces released by an experiment operating within the newly-discovered magneto-gravitic or electro-gravitic spectra. The surviving scientists soon learn that they can selectively kill people by releasing the internal pressure of their cell membranes. Using this discovery they construct a race-selective weapon which will kill only Asians.

They devise other uses for the awesome forces they have discovered, but how can a handful of men overthrow an occupation force that controls all communications and when it is a crime to print a word in English? Noting that the invaders have allowed the free practice of religion (the better to pacify their slaves), the Americans set up a church of their own and begin acting as "Priests of Mota" (Mota is atom spelled backwards) in order to build a resistance movement—which Major Ardmore, the protagonist of the book, refers to as the Sixth Column (as opposed to a traitorous fifth column
Fifth column
A fifth column is a group of people who clandestinely undermine a larger group such as a nation from within.-Origin:The term originated with a 1936 radio address by Emilio Mola, a Nationalist General during the 1936–39 Spanish Civil War...
).

The original idea for the story of Sixth Column was proposed by John W. Campbell
John W. Campbell
John Wood Campbell, Jr. was an influential figure in American science fiction. As editor of Astounding Science Fiction , from late 1937 until his death, he is generally credited with shaping the so-called Golden Age of Science Fiction.Isaac Asimov called Campbell "the most powerful force in...
(who had written a similar unpublishable story called All), and Heinlein later wrote that he had "had to reslant it to remove racist aspects of the original story line" and that he did not "consider it to be an artistic success."

Heinlein’s work on Campbell’s All was considerably more than just a re-slanting; Campbell’s story was felt to be unpublishable as it stood, written in a pseudo-archaic dialect (with occasional inconsistencies), with no scientific explanations for the apparently miraculous powers of the American super-weapons. (There are plausible discussions of the weapons, but by the PanAsians, concluding that their powers must be divine.) George Zebrowski
George Zebrowski
George Zebrowski is a science fiction author and editor who has written and edited a number of books. He lives with author Pamela Sargent, with whom he has co-written a number of novels, including Star Trek novels.Zebrowski won the John W. Campbell Memorial Award in 1999 for his novel Brute Orbits...
, in his afterword to the story, speculates that Heinlein was parodying Campbell in the character of Calhoun, who goes insane and actually believes the false religion created by the Americans. The bulk of Heinlein’s work on the novel, e.g., the explanations of the weapons’ effectiveness and the strategy for the American’s rebellion, are missing from All.

Boucher
Anthony Boucher
Anthony Boucher was an American science fiction editor and author of mystery novels and short stories. He was particularly influential as an editor. Between 1942 and 1947 he acted as reviewer of mostly mystery fiction for the San Francisco Chronicle...
and McComas
J. Francis McComas
Jesse Francis McComas was an American science fiction editor. McComas wrote several stories on his own in the 1950s using both his own name and the pseudonym Webb Marlowe....
found the novel to be "a fine example of serious pulp science fiction.". P. Schuyler Miller
P. Schuyler Miller
Peter Schuyler Miller was an American science fiction writer and critic.-Life:Miller was raised in New York's Mohawk Valley, which led to a life-long interest in the Iroquois Indians. He pursued this as an amateur archaeologist and a member of the New York State Archaeological Association.He...
compared Sixth Column to "the old E. Phillips Oppenheim
E. Phillips Oppenheim
Edward Phillips Oppenheim , was an English novelist, in his lifetime a major and successful writer of genre fiction including thrillers.-Life:...
or modern Eric Ambler
Eric Ambler
Eric Clifford Ambler OBE was an influential British author of spy novels who introduced a new realism to the genre. Ambler also used the pseudonym Eliot Reed for books co-written with Charles Rodda.-Life:...
intrigue, thrust and counterthrust with civilization at stake."

The book was written in the same year as the attack on Pearl Harbor
Attack on Pearl Harbor
The attack on Pearl Harbor was a surprise military strike conducted by the Imperial Japanese Navy against the United States naval base at Pearl Harbor, Hawaii, on the morning of December 7, 1941...
, while its hardcover publication coincided with the Communist victory in China; with the PanAsians being both Chinese and Japanese, it had a direct topical relevance in both cases. It is notable for its frank portrayal of racism
Racism
Racism is the belief that inherent different traits in human racial groups justify discrimination. In the modern English language, the term "racism" is used predominantly as a pejorative epithet. It is applied especially to the practice or advocacy of racial discrimination of a pernicious nature...
on both sides. The conquerors regard themselves as a chosen people predestined to rule over lesser races, and they refer to white people as slaves. "Three things only do slaves require: work, food, and their religion." They require outward signs of respect, such as jumping promptly into the gutter when a member of the chosen race walks by, and the slightest hesitation to show the prescribed courtesies earns a swagger stick
Swagger stick
A swagger stick is a short stick or riding crop usually carried by a uniformed person as a symbol of authority. A swagger stick is shorter than a staff or cane, and is usually made from rattan.-History:...
across the face. One character is Frank Mitsui, an Asian American
Asian American
Asian Americans are Americans of Asian descent. The U.S. Census Bureau definition of Asians as "Asian” refers to a person having origins in any of the original peoples of the Far East, Southeast Asia, or the Indian subcontinent, including, for example, Cambodia, China, India, Indonesia, Japan,...
whose family was murder
Murder
Murder is the unlawful killing, with malice aforethought, of another human being, and generally this state of mind distinguishes murder from other forms of unlawful homicide...
ed by the invaders because they did not fit in the new PanAsiatic racial order. The Americans in the novel respond to their conquerors' racism by often referring to them in unflattering terms, such as "flat face", "slanty" (a derisive reference to the look typical of Asian eyes), and "monkey boy".

Sixth Column and Farnham's Freehold
Farnham's Freehold
Farnham's Freehold is a science fiction novel set in the near future by Robert A. Heinlein. A serialised version, edited by Frederik Pohl, appeared in Worlds of If magazine . The complete version was published in novel form by G.P...
, another novel by Heinlein, both center on the issue of race. Whereas some people perceive Sixth Column as racist
Racism
Racism is the belief that inherent different traits in human racial groups justify discrimination. In the modern English language, the term "racism" is used predominantly as a pejorative epithet. It is applied especially to the practice or advocacy of racial discrimination of a pernicious nature...
, Farnham's Freehold turns the tables by reversing the racial stereotypes. A more complete discussion of race in Heinlein's fiction is given in the main article on Heinlein.
The source of this article is wikipedia, the free encyclopedia.  The text of this article is licensed under the GFDL.