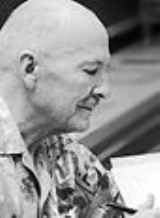 Overview
Robert Anson Heinlein (ˈhaɪnlaɪn)(July 7, 1907 – May 8, 1988) was an American
United States
The United States of America is a federal constitutional republic comprising fifty states and a federal district...
science fiction
Science fiction
Science fiction is a genre of fiction dealing with imaginary but more or less plausible content such as future settings, futuristic science and technology, space travel, aliens, and paranormal abilities...
writer
Writer
A writer is a person who produces literature, such as novels, short stories, plays, screenplays, poetry, or other literary art. Skilled writers are able to use language to portray ideas and images....
. Often called the "dean of science fiction writers", he was one of the most influential and controversial authors of the genre. He set a standard for science and engineering plausibility and helped to raise the genre's standards of literary quality. He was one of the first science fiction writers to break into mainstream magazines such as The Saturday Evening Post
The Saturday Evening Post
The Saturday Evening Post is a bimonthly American magazine. It was published weekly under this title from 1897 until 1969, and quarterly and then bimonthly from 1971.-History:...
in the late 1940s.

How can I possibly put a new idea into your heads, if I do not first remove your delusions?

One can judge from experiment, or one can blindly accept authority. To the scientific mind, experimental proof is all important and theory is merely a convenience in description, to be junked when it no longer fits. To the academic mind, authority is everything and facts are junked when they do not fit theory laid down by authority.

You have attributed conditions to villainy that simply result from stupidity.

Logic of Empire|Logic of Empire (1941); this is one of the earliest known variants of an idea which has become known as Hanlon%27s_razor|Hanlon's razor.

An armed society is a polite society.

The whole principle is wrong. It's like demanding that grown men live on skim milk because the baby can't have steak.

Every law that was ever written opened up a new way to graft.

Never worry about theory as long as the machinery does what it's supposed to do.

Man is not a rational animal, he is a rationalizing animal.

Take sex away from people. Make it forbidden, evil. Limit it to ritualistic breeding. Force it to back up into suppressed sadism. Then hand the people a scapegoat to hate. Let them kill a scapegoat occasionally for cathartic release. The mechanism is ages old. Tyrants used it centuries before the word "psychology" was ever invented. It works, too.