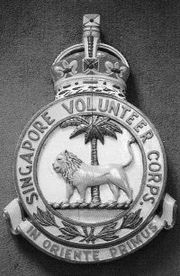 The idea for a volunteer corps to supplement the local constabulary
Constabulary
Constabulary may have several definitions.*A civil, non-paramilitary force consisting of police officers called constables. This is the usual definition in Britain, in which all county police forces once bore the title...
for tighter internal security was first raised in 1846. The first corps, the Singapore Volunteer Rifles Corps (SVRC), was formed after the outbreak of riots between Chinese secret societies
Secret societies in Singapore
Secret societies in Singapore are generally Chinese in origin. They have been largely eradicated as a security issue in the city state. However many smaller groups remain today which attempt to mimic societies of the past...
from 5-17 May 1854. The conflict caused widespread unrest and loss of life on the island, and was severe enough for the police to require the support of the military, some marines, European residents acting as Special Constables, sepoys and even convicts to restore order. More than 400 people were killed and 300 houses burned down.

In view of the escalating violence from the Chinese secret societies, and the outbreak of the Crimean War
Crimean War
The Crimean War was a conflict fought between the Russian Empire and an alliance of the French Empire, the British Empire, the Ottoman Empire, and the Kingdom of Sardinia. The war was part of a long-running contest between the major European powers for influence over territories of the declining...
, it was decided that a volunteer corps of European residents, led by British officers, would heighten security for the settlement. It was initially run on private funds, and members had to use their own weaponry. Formed in 8 July 1854 with the support of the Governor
Governors of Singapore
The Governors of Singapore were the political leaders of Singapore during its pre-independence phase in the history of Singapore.-Resident of Singapore :...
, Colonel William John Butterworth, the SVRC was one of the earliest official volunteer units in the British Empire
British Empire
The British Empire comprised the dominions, colonies, protectorates, mandates and other territories ruled or administered by the United Kingdom. It originated with the overseas colonies and trading posts established by England in the late 16th and early 17th centuries. At its height, it was the...
. In 1857, the Indian Government
Company rule in India
Company rule in India refers to the rule or dominion of the British East India Company on the Indian subcontinent...
passed the Volunteer Ordinance, which placed the SVRC under government control.

The SVRC was disbanded in December 1887 when its numbers dwindled to a small half company. In February 1888, the corps was revived as the Singapore Volunteer Artillery, and was the first unit in the British Empire, regular or auxiliary, to field the Maxim Gun
Maxim gun
The Maxim gun was the first self-powered machine gun, invented by the American-born British inventor Sir Hiram Maxim in 1884. It has been called "the weapon most associated with [British] imperial conquest".-Functionality:...
. The guns arrived in 1889 and were funded by donations from the Sultan of Johor
Sultan of Johor
Sultan of Johor is a hereditary seat and the nominal ruler of the Malaysian state of Johor. In the past, the sultan held absolute power over the state and was advised by a bendahara...
, members of the various communities in Singapore and prominent businessmen.

In 1954, with the disbandment of the SSVF, the Singapore Volunteer Corps were absorbed into the Singapore Military Forces
Singapore Armed Forces
The Singapore Armed Forces is the military arm of the Total Defence of the Republic of Singapore; as well as the military component of the Ministry of Defence. The SAF comprises three branches: the Singapore Army, the Republic of Singapore Air Force and the Republic of Singapore Navy...
. The Corps assisted in defence during the Malayan Emergency
Malayan Emergency
The Malayan Emergency was a guerrilla war fought between Commonwealth armed forces and the Malayan National Liberation Army , the military arm of the Malayan Communist Party, from 1948 to 1960....
, and the at the height of the Indonesian Confrontation, was deployed to protect vital installations in Singapore and southern Johor
Johor
Johor is a Malaysian state, located in the southern portion of Peninsular Malaysia. It is one of the most developed states in Malaysia. The state capital city and royal city of Johor is Johor Bahru, formerly known as Tanjung Puteri...
against saboteurs.

With the independence of Singapore and the passing of the People's Defence Force Act in 1965, the SVC was renamed the People's Defence Force and its units were absorbed into the Singapore Armed Forces as full-time National Service
National Service in Singapore
Conscription in Singapore, called National Service , requires all male Singaporean citizens and second-generation permanent residents who have reached the age of 18 to enrol in the military...
operational battalions. Many volunteer officers were also transferred to the regular army. The volunteers continued to play a role in national security, which included the training of part-time National Servicemen when National Service was introduced in 1967. However, with the introduction of compulsory full-time national service and dwindling volunteer enlistment, their role diminished. 101 PDF, the last volunteer battalion, was disbanded in March 1984.