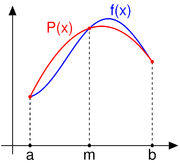 Simpson's rule is a staple of scientific data analysis and engineering. It is widely used, for example, by Naval architects
Naval architecture
Naval architecture is an engineering discipline dealing with the design, construction, maintenance and operation of marine vessels and structures. Naval architecture involves basic and applied research, design, development, design evaluation and calculations during all stages of the life of a...
to calculate the capacity of a ship or lifeboat
Lifeboat (shipboard)
A lifeboat is a small, rigid or inflatable watercraft carried for emergency evacuation in the event of a disaster aboard ship. In the military, a lifeboat may be referred to as a whaleboat, dinghy, or gig. The ship's tenders of cruise ships often double as lifeboats. Recreational sailors sometimes...
.

One derivation replaces the integrand

which takes the same values as

An easy (albeit tedious) calculation shows that


Averaging the midpoint and the trapezoidal rules

and the trapezoidal rule

The errors in these approximations are

respectively. It follows that the leading error term vanishes if we take the weighted average

Using another approximation (for example, the trapezoidal rule with twice as many points), it is possible to take a suitable weighted average and eliminate another error term. This is Romberg's method
Romberg's method
In numerical analysis, Romberg's method is used to estimate the definite integral \int_a^b f \, dx by applying Richardson extrapolation repeatedly on the trapezium rule or the rectangle rule . The estimates generate a triangular array...
.

The third derivation starts from the ansatz
Ansatz
Ansatz is a German noun with several meanings in the English language.It is widely encountered in physics and mathematics literature.Since ansatz is a noun, in German texts the initial a of this word is always capitalised.-Definition:...

The coefficients α, β and γ can be fixed by requiring that this approximation be exact for all quadratic polynomials. This yields Simpson's rule.

The error in approximating an integral by Simpson's rule is

is some number between

The error is asymptotically proportional to

. However, the above derivations suggest an error proportional to

. Simpson's rule gains an extra order because the points at which the integrand is evaluated are distributed symmetrically in the interval [a, b].

Simpson's rule provides exact results for any polynomial of degree three or less, since the error term involves the fourth derivative of f.

If the interval of integration

is in some sense "small", then Simpson's rule will provide an adequate approximation to the exact integral. By small, what we really mean is that the function being integrated is relatively smooth over the interval

. For such a function, a smooth quadratic interpolant like the one used in Simpson's rule will give good results.

However, it is often the case that the function we are trying to integrate is not smooth over the interval. Typically, this means that either the function is highly oscillatory, or it lacks derivatives at certain points. In these cases, Simpson's rule may give very poor results. One common way of handling this problem is by breaking up the interval

into a number of small subintervals. Simpson's rule is then applied to each subinterval, with the results being summed to produce an approximation for the integral over the entire interval. This sort of approach is termed the composite Simpson's rule.

Suppose that the interval

is split up in

an even number. Then, the composite Simpson's rule is given by

. The above formula can also be written as

is the "step length", given by

This formulation splits the interval

This is another formulation of a composite Simpson's rule: instead of applying Simpson's rule to disjoint segments of the integral to be approximated, Simpson's rule is applied to overlapping segments, yielding:

The error of this method is:

is some number between

. Thus, the 3/8 rule is about twice as accurate as the standard method, but it uses one more function value. A composite 3/8 rule also exists, similarly as above.

An implementation of the composite Simpson's rule in pylab: