It was founded on 12 October 1847 as Telegraphen-Bauanstalt von Siemens & Halske by Ernst Werner von Siemens
Ernst Werner von Siemens
Ernst Werner Siemens, von Siemens since 1888, was a German inventor and industrialist. Siemens' name has been adopted as the SI unit of electrical conductance, the siemens...
and Johann Georg Halske
Johann Georg Halske
Johann Georg Halske was a German master mechanic.Born in Hamburg, Halske started his own workshop in Berlin in 1844, which he ran together with his partner F. M. Böttcher. In 1847 Halske founded the Siemens & Halske Telegraph Construction Company together with Werner von Siemens...
. The company, located in Berlin
Berlin
Berlin is the capital city of Germany and is one of the 16 states of Germany. With a population of 3.45 million people, Berlin is Germany's largest city. It is the second most populous city proper and the seventh most populous urban area in the European Union...
-Kreuzberg
Kreuzberg
Kreuzberg, a part of the combined Friedrichshain-Kreuzberg borough located south of Mitte since 2001, is one of the best-known areas of Berlin...
, specialised in manufacturing electrical telegraph
Electrical telegraph
An electrical telegraph is a telegraph that uses electrical signals, usually conveyed via telecommunication lines or radio. The electromagnetic telegraph is a device for human-to-human transmission of coded text messages....
s according to Charles Wheatstone
Charles Wheatstone
Sir Charles Wheatstone FRS , was an English scientist and inventor of many scientific breakthroughs of the Victorian era, including the English concertina, the stereoscope , and the Playfair cipher...
's patent of 1837. In 1848 the company constructed one of the first European telegraph lines from Berlin to Frankfurt am Main. Siemens & Halske quickly expanded with representatives in Great Britain (Carl Wilhelm Siemens
Carl Wilhelm Siemens
Carl Wilhelm Siemens was a German born engineer who for most of his life worked in Britain and later became a British subject.-Biography:...
) and Russia (Carl Heinrich von Siemens
Carl Heinrich von Siemens
Carl Heinrich von Siemens was a German entrepreneur, a child of a tenant farmer. He is a brother of Ernst Werner von Siemens and William Siemens, sons of Christian Ferdinand Siemens and wife Eleonore Deichmann...
) a well as own cable-manufacturing plants at Woolwich
Woolwich
Woolwich is a district in south London, England, located in the London Borough of Greenwich. The area is identified in the London Plan as one of 35 major centres in Greater London.Woolwich formed part of Kent until 1889 when the County of London was created...
and Saint Petersburg
Saint Petersburg
Saint Petersburg is a city and a federal subject of Russia located on the Neva River at the head of the Gulf of Finland on the Baltic Sea...
. The company's rise was supported by Werner von Siemens' patent of the electrical generator
Electrical generator
In electricity generation, an electric generator is a device that converts mechanical energy to electrical energy. A generator forces electric charge to flow through an external electrical circuit. It is analogous to a water pump, which causes water to flow...
(dynamo
Dynamo
- Engineering :* Dynamo, a magnetic device originally used as an electric generator* Dynamo theory, a theory relating to magnetic fields of celestial bodies* Solar dynamo, the physical process that generates the Sun's magnetic field- Software :...
) in 1867. 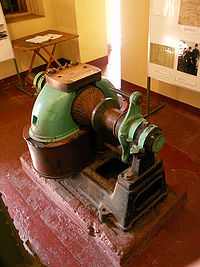 In 1881 Siemens & Halske built the Gross-Lichterfelde Tramway
Gross-Lichterfelde Tramway
The Gross Lichterfelde Tramway was the world's first electric tramway. It was built by the Siemens & Halske company in Lichterfelde, a suburb of Berlin, and went in service on 16 May 1881....
, the world's first electric streetcar
History of Trams
Tram, streetcar or trolley systems were common throughout the industrialized world in the late 19th and early 20th centuries, but they disappeared from many cities in the mid-20th century. In recent years, they have made a comeback...
line, in the southwestern Lichterfelde
Lichterfelde (Berlin)
Lichterfelde is a locality in the borough of Steglitz-Zehlendorf in Berlin, Germany. Until 2001 it was part, with Steglitz and Lankwitz of the former Steglitz borough.-History:...
suburb of Berlin, followed by the Mödling and Hinterbrühl Tram
Mödling and Hinterbrühl Tram
Mödling and Hinterbrühl Tram or Mödling and Hinterbrühl Local Railway was an electric tramway in Austria, running from Mödling to Hinterbrühl, in the southwest of Vienna. The gauge was 1000 mm...
near Vienna
Vienna
Vienna is the capital and largest city of the Republic of Austria and one of the nine states of Austria. Vienna is Austria's primary city, with a population of about 1.723 million , and is by far the largest city in Austria, as well as its cultural, economic, and political centre...
, the first electrical interurban
Interurban
An interurban, also called a radial railway in parts of Canada, is a type of electric passenger railroad; in short a hybrid between tram and train. Interurbans enjoyed widespread popularity in the first three decades of the twentieth century in North America. Until the early 1920s, most roads were...
tram in Austria–Hungary. 1882 saw the opening of the experimental "Elektromote
Elektromote
The Electromote was the world's first vehicle run like a trolleybus, which was first presented to the public on April 29, 1882, by its inventor Dr. Ernst Werner von Siemens in Halensee, a suburb of Berlin, Germany. The Elektromote operated from April 29 to June 13, 1882, on a 540 m ...
" track, an early trolleybus
Trolleybus
A trolleybus is an electric bus that draws its electricity from overhead wires using spring-loaded trolley poles. Two wires and poles are required to complete the electrical circuit...
concept in the Berlin suburb of Halensee
Halensee
Halensee is a locality of Berlin in the district of Charlottenburg-Wilmersdorf. Until 2004 the former neighbourhood established about 1880 was part of the Wilmersdorf locality, and until 2001 of the same-named former borough...
. In the same time Siemens & Halske further increased, erecting new premises in nearby Charlottenburg
Charlottenburg
Charlottenburg is a locality of Berlin within the borough of Charlottenburg-Wilmersdorf, named after Queen consort Sophia Charlotte...
.

In 1887 Emil Rathenau
Emil Rathenau
Emil Moritz Rathenau was a German entrepreneur and industrialist, a leading figure in the early European electrical industry.- Biography :...
had established Allgemeine Elektrizitäts-Gesellschaft
AEG
Allgemeine Elektricitäts-Gesellschaft was a German producer of electrical equipment founded in 1883 by Emil Rathenau....
(AEG), which became a long-time rival. Werner von Siemens retired in 1890, Johann Georg Halske had already left the company in 1867. Werner von Siemens' brother Carl Heinrich together with Werner's sons Arnold
Arnold von Siemens
Arnold von Siemens was a German telecommunications industrialist, one of the successors on his family's company, the son of Ernst Werner von Siemens and his first wife Mathilde Duman....
and Georg Wilhelm
Georg Wilhelm von Siemens
Georg Wilhelm von Siemens was a German telecommunications industrialist.Known as Wilhelm von Siemens, he was the son of Werner von Siemens by first wife Mathilde Duman and was a general partner of Siemens AG.Married in 1882 to Eleonore Siemens , and were the parents of:* Wilhelm Ferdinand...
in 1897 founded the Siemens & Halske AG
Aktiengesellschaft
Aktiengesellschaft is a German term that refers to a corporation that is limited by shares, i.e. owned by shareholders, and may be traded on a stock market. The term is used in Germany, Austria and Switzerland...
located in Charlottenburg. From 1899 on it had a vast new site erected on the banks of the western Spree
Spree
The Spree is a river that flows through the Saxony, Brandenburg and Berlin states of Germany, and in the Ústí nad Labem region of the Czech Republic...
river, later known as Siemensstadt
Siemensstadt
The Siemensstadt Housing Estate is a nonprofit residential community in the Charlottenburg-Wilmersdorf district of Berlin. It is one of the six Modernist Housing Estates in Berlin recognized in July 2008 by UNESCO as a World Heritage Site.-Geography:...
.

When Siemens & Halske merged parts of its activities with Schuckert & Co., Nuremberg
Nuremberg
Nuremberg[p] is a city in the German state of Bavaria, in the administrative region of Middle Franconia. Situated on the Pegnitz river and the Rhine–Main–Danube Canal, it is located about north of Munich and is Franconia's largest city. The population is 505,664...
in 1903 to become Siemens-Schuckert
Siemens-Schuckert
Siemens-Schuckert was a German electrical engineering company headquartered in Berlin, Erlangen and Nuremberg that was incorporated into the Siemens AG in 1966....
, Siemens & Halske AG specialized in communications engineering. During World War I
World War I
World War I , which was predominantly called the World War or the Great War from its occurrence until 1939, and the First World War or World War I thereafter, was a major war centred in Europe that began on 28 July 1914 and lasted until 11 November 1918...
, rotary engine
Rotary engine
The rotary engine was an early type of internal-combustion engine, usually designed with an odd number of cylinders per row in a radial configuration, in which the crankshaft remained stationary and the entire cylinder block rotated around it...
s of advanced and unusual design were produced under the Siemens-Halske brand, like the Siemens-Halske Sh.I and Sh.III
Siemens-Halske Sh.III
Siemens-Halske's Sh.III was an 11-cylinder, air-cooled rotary engine developed in Germany during World War I, similar to the Sh.I.-Design:It shared with its predecessor the unusual design feature of having its internal workings rotating in a clockwise direction as seen from "nose-on", within the...
. Later Siemens established several company subsidiaries for which the Siemens & Halske AG functioned as a holding company.