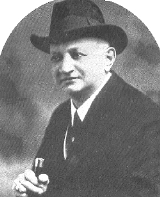 He started by making his own camera and projector combination, which he sold. In 1896 he began distributing films for Thomas Edison
Thomas Edison
Thomas Alva Edison was an American inventor and businessman. He developed many devices that greatly influenced life around the world, including the phonograph, the motion picture camera, and a long-lasting, practical electric light bulb. In addition, he created the world’s first industrial...
. in 1897 he started making films and in 1902 formed the Lubin Manufacturing Company
Lubin Studios
The Lubin Manufacturing Company, was an American motion picture production company that produced silent films from 1902 to 1916. Lubin films were distributed with a Liberty Bell trademark.-History:...
, incorporating
Corporation
A corporation is created under the laws of a state as a separate legal entity that has privileges and liabilities that are distinct from those of its members. There are many different forms of corporations, most of which are used to conduct business. Early corporations were established by charter...
it in 1909. By 1910 his company had built a film studio, "Lubinville", in Philadelphia.

A fire at its studio in June 1914 destroyed the negatives for his unreleased new films. When World War I
World War I
World War I , which was predominantly called the World War or the Great War from its occurrence until 1939, and the First World War or World War I thereafter, was a major war centred in Europe that began on 28 July 1914 and lasted until 11 November 1918...
broke out in Europe
Europe
Europe is, by convention, one of the world's seven continents. Comprising the westernmost peninsula of Eurasia, Europe is generally 'divided' from Asia to its east by the watershed divides of the Ural and Caucasus Mountains, the Ural River, the Caspian and Black Seas, and the waterways connecting...
in September of that year, Lubin Studios, and other American filmmakers, lost foreign sales. The dissolution of the Motion Picture Patents Company
Motion Picture Patents Company
The Motion Picture Patents Company , founded in December 1908, was a trust of all the major American film companies , the leading film distributor and the biggest supplier of raw film stock, Eastman Kodak...
. After making more than a thousand motion pictures, on September, 1, 1917, the Lubin Film Company went out of business.

He went back to work as an ophthalmologist.