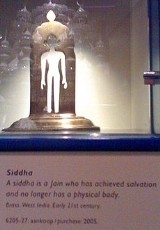 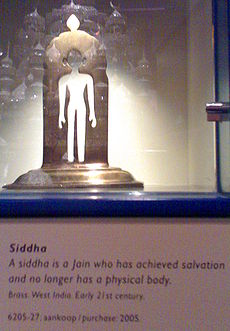 A Siddha सिद्ध in Sanskrit
Sanskrit
Sanskrit , is a historical Indo-Aryan language and the primary liturgical language of Hinduism, Jainism and Buddhism.Buddhism: besides Pali, see Buddhist Hybrid Sanskrit Today, it is listed as one of the 22 scheduled languages of India and is an official language of the state of Uttarakhand...
means "one who is accomplished" and refers to perfected masters who, according to Hindu
Hindu
Hindu refers to an identity associated with the philosophical, religious and cultural systems that are indigenous to the Indian subcontinent. As used in the Constitution of India, the word "Hindu" is also attributed to all persons professing any Indian religion...
belief, have transcended the ahamkara
Ahamkara
Ahaṃkāra , a Sanskrit term that originated in Vedic philosophy over 3,000 years ago, and was later incorporated into Hindu philosophy, particularly Saṃkhyā philosophy....
(ego or I-maker), have subdued their minds to be subservient to their Awareness, and have transformed their bodies (composed mainly of dense Rajo-tama gunas) into a different kind of body dominated by sattva
Sattva
In Hindu philosophy, sattva is the most rarefied of the three gunas in Samkhya, sāttvika "pure", rājasika "dim", and tāmasika "dark". Importantly, no value judgement is entailed as all guna are indivisible and mutually qualifying...
. This is usually accomplished only by persistent meditation
Meditation
Meditation is any form of a family of practices in which practitioners train their minds or self-induce a mode of consciousness to realize some benefit....
.

According to Jain belief Siddha are liberated souls who have destroyed all the karma
Karma
Karma in Indian religions is the concept of "action" or "deed", understood as that which causes the entire cycle of cause and effect originating in ancient India and treated in Hindu, Jain, Buddhist and Sikh philosophies....
bondings. Siddha do not have any kind of body, they are soul at its purest form.

A siddha has also been defined to refer to one who has attained a siddhi
Siddhi
is a Sanskrit noun that can be translated as "perfection", "accomplishment", "attainment", or "success". The term is first attested in the Mahabharata. In the Pancatantra, a siddhi may be any unusual skill or faculty or capability...
. The siddhis as paranormal abilities are considered emergent
Emergence
In philosophy, systems theory, science, and art, emergence is the way complex systems and patterns arise out of a multiplicity of relatively simple interactions. Emergence is central to the theories of integrative levels and of complex systems....
abilities of an individual that is on the path to siddhahood, and do not define a siddha, who is established in the Pranav or Aum
Aum
Om or Aum Om or Aum Om or Aum (also , written in Devanāgari as and as , in Sanskrit known as (lit. "to sound out loudly"), ', or ' (also as ') (lit. "Auṃ form/syllable"), is a sacred/mystical syllable in the Dharmic or Indian religions, i.e...
– the spiritual substrate of creation. The siddhi in its pure form means "the attainment of flawless identity with Reality (Brahman
Brahman
In Hinduism, Brahman is the one supreme, universal Spirit that is the origin and support of the phenomenal universe. Brahman is sometimes referred to as the Absolute or Godhead which is the Divine Ground of all being...
); perfection of Spirit."

In the Hindu philosophy
Hindu philosophy
Hindu philosophy is divided into six schools of thought, or , which accept the Vedas as supreme revealed scriptures. Three other schools do not accept the Vedas as authoritative...
of Kashmir Shaivism
Kashmir Shaivism
Among the various Hindu philosophies, Kashmir Shaivism is a school of Śaivism consisting of Trika and its philosophical articulation Pratyabhijña...
(Hindu tantra), siddha also refers to a Siddha Guru who can by way of Shaktipat
Shaktipat
Shaktipat or Śaktipāta refers in Hinduism to the conferring of spiritual "energy" upon one person by another...
initiate disciples into Yoga
Yoga
Yoga is a physical, mental, and spiritual discipline, originating in ancient India. The goal of yoga, or of the person practicing yoga, is the attainment of a state of perfect spiritual insight and tranquility while meditating on Supersoul...
.

In Jain cosmology
Jain cosmology
Jain cosmology is the description of the shape and functioning of the physical and metaphysical Universe and its constituents according to Jainism, which includes the canonical Jain texts, commentaries and the writings of the Jain philosopher-monks...
, siddha-shila is situated at the very top of universe. The siddha
Siddha
A Siddha सिद्ध in Sanskrit means "one who is accomplished" and refers to perfected masters who, according to Hindu belief, have transcended the ahamkara , have subdued their minds to be subservient to their Awareness, and have transformed their bodies into a different kind of body dominated by...
s (liberated souls who will never take birth again, who have gone above the cycle of life and death) go to the siddha-shila after being liberated and stays there till infinity. Siddha is a level of soul above Arihant
Arihant (Jainism)
Arihant in Jainism is a siddha who has not yet died and thereby lost all aghatiya karma. The Ṇamōkāra mantra begins, Ṇamō arihantāṇaṁ "I praise the arihants"....
who possess kevala jñana
Kevala Jnana
In Jainism, ' or ' , "Perfect or Absolute Knowledge", is the highest form of knowledge that a soul can attain. A person who has attained is called a Kevalin, which is synonymous with Jina "victor" and Arihant "the worthy one"...
. In Hindu cosmology
Hindu cosmology
In Hindu cosmology the universe is, according to Hindu mythology and Vedic cosmology, cyclically created and destroyed.-Description:The Hindu cosmology and timeline is the closest to modern scientific timelines and even more which might indicate that the Big Bang is not the beginning of everything...
, siddhaloka is a subtle world (loka
Loka
Loka is a Sanskrit word for "world". In Hindu mythology it takes a specific meaning related to cosmology.-Hindu tradition:In the Puranas, and already in the Atharvaveda, there are fourteen worlds, seven higher ones and seven lower ones , viz...
) where perfected beings (siddhas) take birth. They are endowed with the eight primary siddhi
Siddhi
is a Sanskrit noun that can be translated as "perfection", "accomplishment", "attainment", or "success". The term is first attested in the Mahabharata. In the Pancatantra, a siddhi may be any unusual skill or faculty or capability...
s at birth.

Siddhashrama is referred in many Indian epics and Puranas including Ramayana and Mahabharata. In Valmiki's Ramayana it is said that Viswamitra had his hermitage in Siddhashrama, the erstwhile hermitage of Vishnu
Vishnu
Vishnu is the Supreme god in the Vaishnavite tradition of Hinduism. Smarta followers of Adi Shankara, among others, venerate Vishnu as one of the five primary forms of God....
, when he appeared as the Vamana
Vamana
Vamana is described in the Puranic texts of Hinduism as the Fifth Avatar of Vishnu, and the first incarnation of the Second Age, or the Treta yuga. Also he is the first Avatar of Vishnu which appears with a completely human form, though it was that of a dwarf brahmin. He is also sometimes known as...
avatar
Avatar
In Hinduism, an avatar is a deliberate descent of a deity to earth, or a descent of the Supreme Being and is mostly translated into English as "incarnation," but more accurately as "appearance" or "manifestation"....
. He takes Rama and Lakshmana to Siddhashrama to exterminate the rakshasa
Rakshasa
A Rakshasa or alternatively rakshas, is a race of mythological humanoid beings or unrighteous spirit in Hindu and Buddhist religion...
s who are disturbing his religious sacrifices (i.28.1-20).

Whenever siddha is mentioned the 84 siddhas and 9 nathas are remembered and it is this tradition of siddha which is known as the Siddha Sampradaya. Siddha is a term used for both mahasiddha
Mahasiddha
Mahasiddha is a term for one who cultivates those teachings that lead to becoming perfect. They are a type of eccentric yogini/yogi in both Sanatan Dharma and Vajrayana Dharma, given by Siddhartha. Mahasiddhi are those practitioners, or tantrikas who have gained sufficient understanding and are so...
s and nathas. So a siddha may mean a siddha, a mahasiddha or a natha. The three words siddha, mahasiddha and natha are used interchangeably.


The eighty-four Siddhas in the Varna(na)ratnakara

A list of eighty-four Siddhas (though, actually only 76 names are mentioned) is found in a manuscript (manuscript no 48/34 of the Asiatic Society of Bengal) dated Lakshmana Samvat 388 (1506) of a medieval Maithili
Maithili language
Maithili language is spoken in the eastern region of India and South-eastern region of Nepal. The native speakers of Maithili reside in Bihar, Jharkhand,parts of West Bengal and South-east Nepal...
work, the Varna(na)ratnākara written by Kaviśekharācārya Jyotirīśvara Ṭhākura
Jyotirishwar Thakur
Jyotirishwar Thakur or ' was a Sanskrit poet and an early Maithili writer, known for the , his encyclopedic work in Maithili.-Life:...
, the court poet of King Harisimhadeva of Mithila (reigned 1300–1321). An interesting feature of this list is that the names of the most revered Nathas are incorporated in this list along with the Buddhist Siddhacharyas. The names of the Siddhas found in this list are:


The Siddhas in the Hathayogapradipika

In the first upadeśa (chapter) of the Haṭhayogapradīpikā
Hatha Yoga Pradipika
The Hatha Yoga Pradipika is a classic Sanskrit manual on hatha yoga, written by Svami Svatmarama, a disciple of Swami Gorakhnath. Said to be the oldest surviving text on the hatha yoga, it is one of the three classic texts of hatha yoga, the other two being the Gheranda Samhita and the Shiva...
, a 15th century text, a list of yogis is found, who are described as the Mahasiddhas. This list has a number of names common with those found in the list of the Varna(na)ratnākara:

In South India, a siddha refers to a being who has achieved a high degree of physical as well as spiritual perfection or enlightenment. The ultimate demonstration of this is that siddhas allegedly attained physical immortality. Thus siddha, like siddhar
Siddhar
Siddhars are saints in India, mostly of the Saivaite denomination in Tamil Nadu, who professed and practised an unorthodox type of Sadhana, or spiritual practice, to attain liberation. Yogic powers called Siddhis are acquired by constant practice of certain yogic disciplines. Those who acquire...
or cittar (indigenisation of Sanskrit term in Tamil Nadu) refers to a person who has realised the goal of a type of sadhana
Sadhana
Sādhanā literally "a means of accomplishing something" is ego-transcending spiritual practice. It includes a variety of disciplines in Hindu, Sikh , Buddhist and Muslim traditions that are followed in order to achieve various spiritual or ritual objectives.The historian N...
and become a perfected being. In Tamil Nadu, South India, where the siddha tradition is still practiced, special individuals are recognized as and called siddhas (or siddhars or cittars) who are on the path to that assumed perfection after they have taken special secret rasayana
Rasayana
Rasayan, a Sanskrit word , is used to describe chemistry and alchemy, and chemistry is generally called Rasayan Shastra in Sanskrit, Nepali, Marathi, Hindi, Kannada and several other languages.Ancient rasayan texts center around the use of prepared forms of mercury or cinnabar , as do...
s to perfect their bodies, in order to be able to sustain prolonged meditation along with a form of pranayama
Pranayama
Pranayama is a Sanskrit word meaning "extension of the prana or breath" or more accurately, "extension of the life force". The word is composed of two Sanskrit words, Prāna, life force, or vital energy, particularly, the breath, and "āyāma", to extend, draw out, restrain, or...
which considerably reduces the number of breaths they take.