Encyclopedia
In Jainism
Jainism
Jainism is an Indian religion that prescribes a path of non-violence towards all living beings. Its philosophy and practice emphasize the necessity of self-effort to move the soul towards divine consciousness and liberation. Any soul that has conquered its own inner enemies and achieved the state...
, or , "Perfect or Absolute Knowledge", is the highest form of knowledge that a soul can attain. A person who has attained is called a Kevalin, which is synonymous with Jina "victor" and Arihant
Arihant (Jainism)
Arihant in Jainism is a siddha who has not yet died and thereby lost all aghatiya karma. The Ṇamōkāra mantra begins, Ṇamō arihantāṇaṁ "I praise the arihants"....
"the worthy one". A Tirthankara is a kevalin who preaches the Jain doctrine and establishes the Jaina order.

In Jain thought, Kevala is the state of isolation of the jīva
Jiva
In Hinduism and Jainism, a jiva is a living being, or more specifically, the immortal essence of a living organism which survives physical death. It has a very similar usage to atma, but whereas atma refers to "the cosmic self", jiva is used to denote an individual 'living entity' or 'living...
from the ajīva
Ajiva
In Jainism, ajiva is anything that has no soul or life, the polar opposite of jiva. Because ajiva has no life, it does not accumulate karma and cannot die. Examples of ajiva include chairs, computers, paper, and plastic. Ajivas can be divided into two kinds, with form and without form.-Five...
attained through ascetic practices which burn off one's karmic residues, releasing one from bondage to the cycle of death and rebirth. Kevala Jñāna thus means infinite knowledge of self and non-self, attained by a soul after annihilation of the all ghātiyā karmas. The soul who has reached this stage achieves moksa
Moksa (Jainism)
' or Mokkha means liberation, salvation or emancipation of soul. It is a blissful state of existence of a soul, completely free from the karmic bondage, free from samsara, the cycle of birth and death. A liberated soul is said to have attained its true and pristine nature of infinite bliss,...
or liberation at the end of his lifespan.

According to Jainism, pure and absolute knowledge is an intrinsic and indestructible quality of all souls. However, because of the accumulation of different types karmas, this quality of soul loses potency and becomes obscured. Following are the types of knowledge:


While other types of knowledge are prone to error on account of delusion, only is perfect and free from all errors.

There are two aspects to : complete realisation of self and omniscience, complete knowledge of non-self.

A person who attains Kevala Jñāna realises the true nature of his soul. He remains engrossed in his true self. He is free from all desires and detached from all worldly activities, as he has achieved the highest objective that can be achieved by the soul.

Secondly, Kevala Jñāna also means complete knowledge of all the activities and objects in the universe. Jain texts describe the omniscience of Mahavira
Mahavira
Mahāvīra is the name most commonly used to refer to the Indian sage Vardhamāna who established what are today considered to be the central tenets of Jainism. According to Jain tradition, he was the 24th and the last Tirthankara. In Tamil, he is referred to as Arukaṉ or Arukadevan...
in this way:


When the Venerable Ascetic Mahavira had become a Jina and Arhat(Arihant), he was a Kevali, omniscient and comprehending all objects; he knew and saw all conditions of the world, of gods, men, and demons: whence they come, whither they go, whether they are born as men or animals or become gods or hell-beings (upapada), the ideas, the thoughts of their minds, the food, doings, desires, the open and secret deeds of all the living beings in the whole world; he the Arhat (Arihant), for whom there is no secret, knew and saw all conditions of all living beings in the world, what they thought, spoke, or did at any moment.(121) 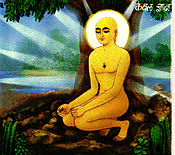 Mahavira is said to have practised rigorous austerities for 12 years before he attained enlightenment:


"During the thirteenth year, in the second month of summer, in the fourth fortnight, the light (fortnight) of Vaisakha, on its tenth day, when the shadow had turned towards the east and the first wake was over, on the day called Suvrata, in the Muhurta called Vigaya, outside of the town Grimbhikagrama (Jrumbak gram) on the bank of the river Rjupalika (Rujuvalika), not far from an old temple, in the field of the householder Samaga(shyamak), under a Sal tree, when the moon was in conjunction with the asterism Uttaraphalguni, (the Venerable One) in a squatting position
Squatting position
Squatting is a posture where the weight of the body is on the feet but the knees are bent either fully or partially . In contrast, sitting, involves taking the weight of the body, at least in part, on the buttocks against the ground or a horizontal object such as a chair seat...
with joined heels, exposing himself to the heat of the sun, after fasting two and a half days without drinking water, being engaged in deep meditation, reached the highest knowledge and intuition, called Kevala, which is infinite, supreme, unobstructed, unimpeded, complete, and full. (120)

is one of the five major events in life of a Tirthankara and is known as Jñāna Kalyanaka and celebrated by all gods. Mahavira’s Kaivalya was celebrated by the demi-gods, who constructed the Samosarana or a grand preaching assembly for him.

and Moksa
Moksa (Jainism)
' or Mokkha means liberation, salvation or emancipation of soul. It is a blissful state of existence of a soul, completely free from the karmic bondage, free from samsara, the cycle of birth and death. A liberated soul is said to have attained its true and pristine nature of infinite bliss,...
are intricately related. Moksa, or liberation, can only be attained by the enlightened beings who have attained Kevala Jñāna. After the death or nirvana of a Kevalin, he becomes a Siddha, a liberated soul in a state of infinite bliss, knowledge, perception and power. It is a permanent and irreversible state, free from sufferings, births and death. It is a state of permanent untrammeled bliss.

There is a direct relationship between Supreme Non-attachment and Omniscience. In the higher stages of meditation or , one first attains the state of wherein one is completely freed of all feelings of attachment to all else other than one's soul. Once a permanent state of is achieved, omniscience follows. This is because omniscience is the basic nature of the soul and it is merely clogged by the presence of the 8 types of karmas in the soul. The attainment of ensures that the 4 types of destructive karmas known as ghatiya karmas are dissociated from the soul permanently. Hence, since the destructive karmas are not present in the soul any more, the soul attains omniscience, its natural attribute.
The source of this article is wikipedia, the free encyclopedia.  The text of this article is licensed under the GFDL.