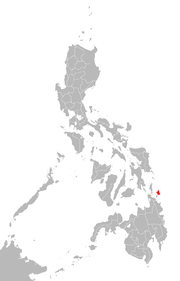 Siargao is a tear-drop shaped island
Island
An island or isle is any piece of sub-continental land that is surrounded by water. Very small islands such as emergent land features on atolls can be called islets, cays or keys. An island in a river or lake may be called an eyot , or holm...
in the Philippine Sea
Philippine Sea
The Philippine Sea is a marginal sea east and north of the Philippines occupying an estimated surface area of 2 million mi² on the western part of the North Pacific Ocean...
situated 800 kilometers southeast of Manila
Manila
Manila is the capital of the Philippines. It is one of the sixteen cities forming Metro Manila.Manila is located on the eastern shores of Manila Bay and is bordered by Navotas and Caloocan to the north, Quezon City to the northeast, San Juan and Mandaluyong to the east, Makati on the southeast,...
in the province of Surigao del Norte
Surigao del Norte
Surigao del Norte is a province of the Philippines located in the Caraga region in Mindanao. Its capital is Surigao City. The province consists of two major islands—Siargao Island and Bucas Grande Island—in the Philippine Sea, and a small region at the northernmost tip of the island of...
. It has a land area of approximately 437 square kilometers. The east coast is relatively straight with one deep inlet
Inlet
An inlet is a narrow body of water between islands or leading inland from a larger body of water, often leading to an enclosed body of water, such as a sound, bay, lagoon or marsh. In sea coasts an inlet usually refers to the actual connection between a bay and the ocean and is often called an...
, Port Pilar. The coastline is marked by a succession of reefs, small points and white, sandy beach
Beach
A beach is a geological landform along the shoreline of an ocean, sea, lake or river. It usually consists of loose particles which are often composed of rock, such as sand, gravel, shingle, pebbles or cobblestones...
es. The neighboring islands and islets have similar landforms.

Siargao Island contains the largest mangrove forest reserves in Mindanao
Mindanao
Mindanao is the second largest and easternmost island in the Philippines. It is also the name of one of the three island groups in the country, which consists of the island of Mindanao and smaller surrounding islands. The other two are Luzon and the Visayas. The island of Mindanao is called The...
, at Del Carmen. Long stretches of wetlands indicate a potential for commercial seaweed
Seaweed
Seaweed is a loose, colloquial term encompassing macroscopic, multicellular, benthic marine algae. The term includes some members of the red, brown and green algae...
propagation. Siargao Island is greatly influenced by the winds and currents coming uninterrupted from the Pacific Ocean
Pacific Ocean
The Pacific Ocean is the largest of the Earth's oceanic divisions. It extends from the Arctic in the north to the Southern Ocean in the south, bounded by Asia and Australia in the west, and the Americas in the east.At 165.2 million square kilometres in area, this largest division of the World...
, intensified by the Mindanao current running westward through the Siargao Strait.

Siargao Island is situated at a coordinate of 9°52′N 126°03′E. It is composed of municipalities of Burgos, Dapa, Del Carmen, General Luna, San Benito, Pilar
Pilar
Our Lady of the Pillar is the name given to the Blessed Virgin Mary for her claimed appearance during the start of Christianity in Spain. She is considered the Patroness of the country and the Spanish Civil Guard. Her shrine is in the Basilica of Our Lady of the Pillar in Zaragoza, by the river...
, San Isidro, Santa Monica and Socorro.

Offshore, a classic tropical island lies protected within its surrounding coral reef
Coral reef
Coral reefs are underwater structures made from calcium carbonate secreted by corals. Coral reefs are colonies of tiny living animals found in marine waters that contain few nutrients. Most coral reefs are built from stony corals, which in turn consist of polyps that cluster in groups. The polyps...
with dozens of coconut
Coconut
The coconut palm, Cocos nucifera, is a member of the family Arecaceae . It is the only accepted species in the genus Cocos. The term coconut can refer to the entire coconut palm, the seed, or the fruit, which is not a botanical nut. The spelling cocoanut is an old-fashioned form of the word...
palms dressed in the center circle of the island. Off to the right, well within the massive coastal reef, lies a shining white sand bar, (Pansukian, or Naked island) some 200 meters long. The tide
Tide
Tides are the rise and fall of sea levels caused by the combined effects of the gravitational forces exerted by the moon and the sun and the rotation of the Earth....
of Siargao is diurnal
Day
A day is a unit of time, commonly defined as an interval equal to 24 hours. It also can mean that portion of the full day during which a location is illuminated by the light of the sun...
with tidal curves typically present, especially on the east coast of the island.

The Island's Pacific-facing reefs are situated on the edge of the Philippine Trench
Philippine Trench
The Philippine Trench is a submarine trench to the east of the Philippines. It has a length of approximately 1,320 km and a width of about 30 km from the centre of the Philippine island of Luzon trending southeast to the northern Maluku island of Halmahera in Indonesia...
, and the extremely deep offshore waters assure the ocean swells have undiluted power when they encounter the many coral and rock reefs. Siargao has excellent surfing
Surfing
Surfing' is a surface water sport in which the surfer rides a surfboard on the crest and face of a wave which is carrying the surfer towards the shore...
conditions, particularly during the southwest "habagat" monsoon
Monsoon
Monsoon is traditionally defined as a seasonal reversing wind accompanied by corresponding changes in precipitation, but is now used to describe seasonal changes in atmospheric circulation and precipitation associated with the asymmetric heating of land and sea...
from August to November, when the prevailing wind is offshore.

In the past, going to Siargao is by domestic flights from Manila to Surigao, and then by boat to Siargao Island. Beginning March 4, 2011 however, the easiest, fastest, most convenient way to the island is now by flying Cebu Pacific direct to Siargao Island via Cebu.1

One of the best known surfing waves on Siargao and the Philippines
Philippines
The Philippines , officially known as the Republic of the Philippines , is a country in Southeast Asia in the western Pacific Ocean. To its north across the Luzon Strait lies Taiwan. West across the South China Sea sits Vietnam...
, with a worldwide reputation for thick, hollow tubes
Tube riding
Tube riding is a term used by surfers to describe riding well inside the curve or barrel of a finely-shaped breaking wave. Under the right conditions, waves in some areas form a moving "tube" or cylinder as they break, for example, see the Banzai Pipeline in Hawaii.The most straightforward way to...
is "Cloud 9". This right-breaking reef wave is the site of the annual Siargao Cup, a domestic and international surfing competition sponsored by the provincial government of Surigao del Norte
Surigao del Norte
Surigao del Norte is a province of the Philippines located in the Caraga region in Mindanao. Its capital is Surigao City. The province consists of two major islands—Siargao Island and Bucas Grande Island—in the Philippine Sea, and a small region at the northernmost tip of the island of...
.

The wave was discovered by travelling surfers in the late 1980s. It was named and made famous by American photographer John S. Callahan, who published the first major feature on Siargao Island in the United States- based Surfer magazine in March 1993, and hundreds of his photos in many other books and magazines since his first visit in 1992. Callahan has put the island on the international map and has drawn thousands of surfers and tourists to Siargao. Cloud 9 also has a reputation for being a relatively cheap destination for surfers with many cheap accommodations and restaurants and bars to choose from.

There are several other quality waves on Siargao and nearby islands, but Cloud 9 has received more publicity than any other, indeed in the Philippines as a whole. It is the only wave easily accessible without a boat, leading to overcrowding and the nickname of "Crowd 9" among surfers. Eager foreign and locally owned accommodation and tourist facilities have profited from the magazine publicity and the influx of visitors drawn by the annual Siargao Cup competition in September.