The aircraft's exterior has been modified to withstand the high aerodynamic forces incurred during training sortie
Sortie
Sortie is a term for deployment or dispatch of one military unit, be it an aircraft, ship, or troops from a strongpoint. The sortie, whether by one or more aircraft or vessels, usually has a specific mission....
s. A redesigned cockpit provides a high-fidelity simulation of the Shuttle Orbiter's controls and pilot vantage point; even the seats are fitted in the same position as those in the Space Shuttle.

The four STAs are normally located at the NASA Forward Operating Location in El Paso
El Paso
El Paso, a city in the U.S. state of Texas, on the border with Mexico.El Paso may also refer to:-Geography:Colombia:* El Paso, CesarSpain:*El Paso, Santa Cruz de TenerifeUnited States:...
, Texas
Texas
Texas is the second largest U.S. state by both area and population, and the largest state by area in the contiguous United States.The name, based on the Caddo word "Tejas" meaning "friends" or "allies", was applied by the Spanish to the Caddo themselves and to the region of their settlement in...
and rotated through Ellington Field
Ellington Field
Ellington International Airport is a joint civil-military airport located in the U.S. state of Texas within the city of Houston— southeast of Downtown. Established by the Army Air Service on 21 May 1917, Ellington Field was one of the initial World War I Army Air Service installations when...
(Houston, Texas) for maintenance. The STA is also used at Kennedy Space Center
Kennedy Space Center
The John F. Kennedy Space Center is the NASA installation that has been the launch site for every United States human space flight since 1968. Although such flights are currently on hiatus, KSC continues to manage and operate unmanned rocket launch facilities for America's civilian space program...
in Florida. It is primarily flown by astronauts practicing landings at the Shuttle Landing Facility and White Sands Space Harbor
White Sands Space Harbor
White Sands Space Harbor is the primary training area used by NASA for Space Shuttle pilots flying practice approaches and landings in the Shuttle Training Aircraft and T-38 Talon aircraft. Its runways, navigational aids, runway lighting, and control facilities also stand continuously ready as a...
as well as to assess weather conditions prior to Space Shuttle launches and landings.

On December 3, 2003, a NASA Gulfstream II
Grumman Gulfstream II
The Gulfstream II is an American twin engine business jet designed and built by Grumman and then in succession, Grumman American and finally Gulfstream American. Its Grumman model number is G-1159 and its US military designation is C-11 Gulfstream II. It has been succeeded by the Gulfstream III...
shuttle Training Aircraft (STA) was flying a series of simulated shuttle landings to the Kennedy Space Center shuttle landing facility. On board the aircraft was an unidentified NASA astronaut pilot and two training personnel. The aircraft was on final approach at 13,000 feet when onboard instruments indicated a malfunction on one of the jet engine thrust reversers. The aircraft landed safely. A post-landing inspection showed that one of the 585-pound, 4-foot-wide, 5-foot-long thrust reversers had fallen off the aircraft. Divers later found the thrust reverser on the bottom of the nearby Banana River. An investigation showed that a bolt failed, releasing the part from the aircraft.

The STA was particularly critical for Shuttle pilots in training because the Orbiter lacks the atmospheric engines that would allow the craft to "go around" after a poor approach. After re-entry, the Shuttle was a very heavy glider
Glider aircraft
Glider aircraft are heavier-than-air craft that are supported in flight by the dynamic reaction of the air against their lifting surfaces, and whose free flight does not depend on an engine. Mostly these types of aircraft are intended for routine operation without engines, though engine failure can...
(it is sometimes referred to as a 'flying brick') and as such had only one chance to land.

In order to match the descent rate and drag profile of the real Shuttle at 37000 feet (11,277.6 m), the main landing gear was lowered (the nose gear stayed retracted due to wind load constraints) and engine thrust is reversed. Its flaps may deflect upwards to decrease lift as well as downwards to increase lift.

Covers are placed on the left hand cockpit windows to provide the same view as from a Shuttle cockpit, and the left-hand pilot's seat is fitted with the same controls as a Shuttle. The STA's normal flight controls are moved to the right, where the instructor sits. Both seat positions have a Head Up Display (HUD).

In a normal exercise, the pilot descends to 20000 feet (6,096 m) at an airspeed of 280 knots (549 km/h), 15 miles (24 km) from the landing target. The pilot then rolls the STA at 12000 feet (3,657.6 m), 7 miles (11 km) from landing. The nose of the aircraft is then dropped to increase speed to 300 knots (588 km/h), descending at a 20-degree angle on the Outer Glide Slope (OGS). The Outer Glide Slope aiming point is 7500ft short of the runway threshold, and uses PAPI's for visual guidance in addition to the MLS system. At 2000ft the guidance system changes to pre-flare and shortly after, at 1700 feet (518 m), the pilot starts the flare maneouver to gradually reduce the descent angle and transition to the Inner Glide Slope (IGS) which is 1.5 degrees from 300ft onwards, using a "Ball-bar" system for visual guidance. The shuttle landing gear release is simulated at 300 feet (91.4 m) above the ground surface, since the STA main gear has been down for the whole simulation. The nose gear of the STA is lowered at 150 ft (46 m) AGL in case of an inadvertent touchdown with the runway surface.

If the speed is correct, a green light on the instrument panel simulates shuttle landing when the pilot's eyes are 32 feet (10 m) above the runway. This is the exact position that the pilot's head would be in during actual landing. In the exercise, the STA is still flying 20 feet (6 m) above the ground. The instructor pilot deselects the simulation mode, stows the thrust reversers, and the instructor flies around the runway, never actually landing the aircraft. 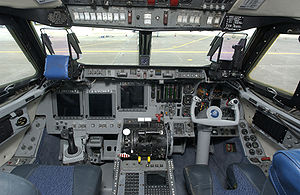 A sophisticated computer system installed on board the STA simulates the flight dynamics of the orbiter with nearly perfect accuracy. The STA's highly realistic simulation of the Orbiter is not limited to handling characteristics, but also implements the shuttle control interfaces for the pilot.

The pilot then navigates the STA around a heading alignment cone (HAC), a maneuver which aligns the shuttle's (or training aircraft's) flight path with the landing runway.

Every Shuttle Commander has practiced at least 1000 landings in this manner, as has each mission's Shuttle Pilot.

In the event NASA's T-38 Talon
T-38 Talon
The Northrop T-38 Talon is a twin-engine supersonic jet trainer. It was the world's first supersonic trainer and is also the most produced. The T-38 remains in service as of 2011 in air forces throughout the world....
s are not available, the STAs are used for transporting crewmembers between major sites, namely from Johnson Space Center
Lyndon B. Johnson Space Center
The Lyndon B. Johnson Space Center is the National Aeronautics and Space Administration's center for human spaceflight training, research and flight control. The center consists of a complex of 100 buildings constructed on 1,620 acres in Houston, Texas, USA...
in Houston to Kennedy Space Center
Kennedy Space Center
The John F. Kennedy Space Center is the NASA installation that has been the launch site for every United States human space flight since 1968. Although such flights are currently on hiatus, KSC continues to manage and operate unmanned rocket launch facilities for America's civilian space program...
in Cape Canaveral
Cape Canaveral
Cape Canaveral, from the Spanish Cabo Cañaveral, is a headland in Brevard County, Florida, United States, near the center of the state's Atlantic coast. Known as Cape Kennedy from 1963 to 1973, it lies east of Merritt Island, separated from it by the Banana River.It is part of a region known as the...
, Florida.