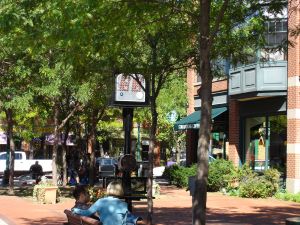 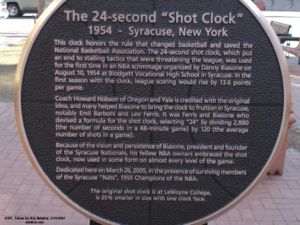 A shot clock is used in some sports to quicken the pace of the game. It is normally associated with basketball
Basketball
Basketball is a team sport in which two teams of five players try to score points by throwing or "shooting" a ball through the top of a basketball hoop while following a set of rules...
, but has also found use in sports such as snooker
Snooker
Snooker is a cue sport that is played on a green baize-covered table with pockets in each of the four corners and in the middle of each of the long side cushions. A regular table is . It is played using a cue and snooker balls: one white , 15 worth one point each, and six balls of different :...
, professional
Major League Lacrosse
Major League Lacrosse, or MLL, is a professional men's field lacrosse league that is made up of five teams in the United States and one team in Canada.- History :...
lacrosse
Lacrosse
Lacrosse is a team sport of Native American origin played using a small rubber ball and a long-handled stick called a crosse or lacrosse stick, mainly played in the United States and Canada. It is a contact sport which requires padding. The head of the lacrosse stick is strung with loose mesh...
, water polo
Water polo
Water polo is a team water sport. The playing team consists of six field players and one goalkeeper. The winner of the game is the team that scores more goals. Game play involves swimming, treading water , players passing the ball while being defended by opponents, and scoring by throwing into a...
, and korfball
Korfball
Korfball is a mixed gender team sport, with similarities to netball and basketball. A team consists of eight players; four female and four male. A team also includes a coach. It was founded in the Netherlands in 1902 by Nico Broekhuysen. In the Netherlands there are around 580 clubs, and over a...
.

In basketball, the shot clock is a timer
Timer
A timer is a specialized type of clock. A timer can be used to control the sequence of an event or process. Whereas a stopwatch counts upwards from zero for measuring elapsed time, a timer counts down from a specified time interval, like an hourglass.Timers can be mechanical, electromechanical,...
designed to increase the pace (and consequently, the score) in games. The offensive team must attempt a field goal before the shot clock expires, and the ball must then either touch the rim or enter the basket, or the offensive team will be assessed a violation resulting in loss of possession
Turnover (basketball)
In basketball, a turnover occurs when a player from one team gives possession to a member of the opposing team by losing the ball. This can result from the ball being stolen, the player making mistakes such as stepping out or throwing the ball out of bounds, or committing a violation or committing...
. However if the ball leaves the hand of the player before the shot clock goes off and makes it or hits the rim, it's not a violation.

The National Basketball Association
National Basketball Association
The National Basketball Association is the pre-eminent men's professional basketball league in North America. It consists of thirty franchised member clubs, of which twenty-nine are located in the United States and one in Canada...
(NBA) had problems attracting fans (and television coverage) before the shot clock's inception. This was largely due to teams killing the clock
Running out the clock
In sports, running out the clock refers to the practice of a winning team allowing the clock to expire through a series of pre-selected plays, either to preserve a lead or hasten the end of a one-sided contest.- American football :...
once they were leading in a game; without the shot clock, teams could pass the ball nearly endlessly without penalty. If one team chose to stall, the other team (especially if behind) would often commit fouls to get the ball back following the free throw. Very low-scoring games with many fouls were common, boring fans. The most extreme case occurred on November 22, 1950, when the Fort Wayne Pistons
Detroit Pistons
The Detroit Pistons are a franchise of the National Basketball Association based in Auburn Hills, Michigan. The team's home arena is The Palace of Auburn Hills. It was originally founded in Fort Wayne, Indiana as the Fort Wayne Pistons as a member of the National Basketball League in 1941, where...
defeated the Minneapolis Lakers
Los Angeles Lakers
The Los Angeles Lakers are an American professional basketball team based in Los Angeles, California. They play in the Pacific Division of the Western Conference in the National Basketball Association...
by a record-low score of 19-18, including 3-1 in the fourth quarter. A few weeks later, the Rochester Royals
Rochester Royals
The franchise that would become the Sacramento Kings initially started in the city of Rochester, New York, as the Rochester Royals of the National Basketball League....
and Indianapolis Olympians
Indianapolis Olympians
The Indianapolis Olympians were a National Basketball Association team based in Indianapolis, Indiana, USA. They were founded in 1949 and folded in 1953. Their home arena was the Hinkle Fieldhouse.-Franchise history:...
played a six-overtime game with only one shot in each overtime. The NBA tried several rule changes in the early 1950s to speed up the game and reduce fouls before eventually adopting the shot clock.

It first came to use in 1954 in Syracuse, New York
Syracuse, New York
Syracuse is a city in and the county seat of Onondaga County, New York, United States, the largest U.S. city with the name "Syracuse", and the fifth most populous city in the state. At the 2010 census, the city population was 145,170, and its metropolitan area had a population of 742,603...
, where Danny Biasone
Daniel Biasone
Daniel Biasone was the founding owner of the Syracuse Nationals, an NBA team now known as the Philadelphia 76ers. Biasone, who was a childhood immigrant to the United States from Italy, was mostly known for advocating the use of the shot clock in basketball...
, the owner of the NBA's Syracuse Nationals
Philadelphia 76ers
The Philadelphia 76ers are a professional basketball team based in Philadelphia, Pennsylvania. They play in the Atlantic Division of the Eastern Conference of the National Basketball Association . Originally known as the Syracuse Nationals, they are one of the oldest franchises in the NBA...
, experimented using a 24-second version during a scrimmage game. According to Biasone, "I looked at the box scores from the games I enjoyed, games where they didn't screw around and stall. I noticed each team took about 60 shots. That meant 120 shots per game. So I took 48 minutes - 2,880 seconds - and divided that by 120 shots. The result was 24 seconds per shot." He then convinced the NBA to adopt it for the 1954-55 season
1954-55 NBA season
The 1954–55 NBA season was the 9th season of the National Basketball Association. The season ended with the Syracuse Nationals winning the NBA Championship, beating the Fort Wayne Pistons 4 games to 3 in the NBA Finals.- Notable occurrences :...
. The Nationals went on to win the 1955 championship
1955 NBA Finals
The 1955 NBA Finals was the championship round of the 1954-55 NBA season. The best-of-seven series was won by the Syracuse Nationals, who defeated the Fort Wayne Pistons in the final game when Syracuse's George King made a free throw with 12 seconds left to put the Nationals up by one point...
.

Well-known clock killer Bob Cousy
Bob Cousy
Robert Joseph "Bob" Cousy is a retired American professional basketball player. The 6'1" , 175-pound Cousy played point guard with the National Basketball Association's Boston Celtics from 1951 to 1963 and briefly with the Cincinnati Royals in the 1969–70 season...
stated "I think [the shot clock] saved the NBA", coach and referee Charley Eckman
Charley Eckman
Charles Markwood "Charley" Eckman Jr. was an NBA basketball coach, minor league baseball player, NCAA and NBA basketball referee, broadcaster, and author....
said "Danny Biasone saved the NBA with the 24-second rule," and league president Maurice Podoloff
Maurice Podoloff
Maurice Podoloff was a U.S. lawyer and basketball and ice hockey administrator. He was the first president of the National Basketball Association...
called the adoption of the shot clock "the most important event in the NBA." The NBA itself states "Biasone's invention rescues the league."

When the shot clock first came into play, it made many players so nervous that the clock hardly came into play, as players were taking fewer than 20 seconds to shoot. According to Syracuse star Dolph Schayes
Dolph Schayes
Adolph "Dolph" Schayes is a retired American professional basketball player and coach in the NBA. A top scorer and rebounder, he was a member of the 1955 NBA champion Syracuse Nationals and a 12-time All-Star....
, "We thought we had to take quick shots - a pass and a shot was it - maybe 8-10 seconds...But as the game went on, we saw the inherent genius in Danny's 24 seconds - you could work the ball around for a good shot." The shot clock, together with some rule changes concerning fouls, immediately revolutionized NBA basketball. In the last pre-clock season, teams averaged 79 points per game. In the first year with the clock (1954–55), the average was up to 93 points; by the fourth year (1957–58), it was 107 points.

In the NBA (since 1954), WNBA (since 2006), and FIBA
International Basketball Federation
The International Basketball Federation, more commonly known as FIBA , from its French name Fédération Internationale de Basketball, is an association of national organizations which governs international competition in basketball...
(since 2000; 30-second from 1956 through 2000), the shot clock counts down 24 seconds, thus often being called the "24-second clock." Failure to attempt a shot that hits the rim within this time results in loss of possession. A buzzer goes off and a yellow LED
LEd
LEd is a TeX/LaTeX editing software working under Microsoft Windows. It is a freeware product....
light strip on top of the backboard illuminates when the shot clock reaches zero.

Furthermore, the shot clock is not reset on a foul in the frontcourt. Rule changes in the NBA since 1998, and in FIBA after 2010 state the shot clock will be reset only if fewer than 13 seconds are on the shot clock, after which it is reset to 14 seconds.

Men's college basketball uses a 35-second clock (since 1993; 45-second from 1985 through 1993) in the United States
United States
The United States of America is a federal constitutional republic comprising fifty states and a federal district...
, and a 30-second clock in Canada
Canada
Canada is a North American country consisting of ten provinces and three territories. Located in the northern part of the continent, it extends from the Atlantic Ocean in the east to the Pacific Ocean in the west, and northward into the Arctic Ocean...
. Women's college basketball in the United States and Canada uses a 30-second clock. The National Federation of State High School Associations
National Federation of State High School Associations
The National Federation of State High School Associations is the body that writes the rules of competition for most high school sports and activities in the United States. Most high schools, whether public or private, belong to their state's high school association; in turn, each state association...
(NFHS), which sets rules for high school basketball in the U.S., does not mandate the use of a shot clock, instead leaving the choice to use a clock and its duration up to each individual state association. Currently, seven U.S. states require the use of a shot clock of either 30 or 35 seconds in high school competition.

FIBA 33
FIBA 33
FIBA 3x3 basketball is a formalized version of three-on-three basketball, a form of the game initially developed on inner-city asphalt outdoor courts in the United States. With over 250 million players worldwide and among the most played recreational sports in the world, 3x3 will become a key motor...
, a formalized version of three-on-three halfcourt basketball recently developed by FIBA, uses a 12-second clock.