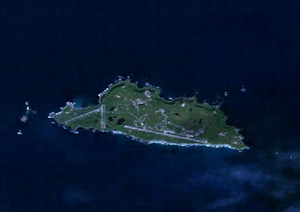 Shemya or Simiya is a small island in the Near Islands
Near Islands
The Near Islands or Sasignan Islands are the smallest and westernmost group of the Aleutian Islands in southwestern Alaska.-Geography:The largest of the Near Islands are Attu and Agattu...
group of the Semichi Islands
Semichi Islands
The Semichi Islands are a cluster of small islands in the Near Islands group of the Aleutian Islands, Alaska. They are located southeast of Attu Island and northeast of Agattu Island, near...
chain in the Aleutian Islands archipelago
Archipelago
An archipelago , sometimes called an island group, is a chain or cluster of islands. The word archipelago is derived from the Greek ἄρχι- – arkhi- and πέλαγος – pélagos through the Italian arcipelago...
southwest of Alaska
Alaska
Alaska is the largest state in the United States by area. It is situated in the northwest extremity of the North American continent, with Canada to the east, the Arctic Ocean to the north, and the Pacific Ocean to the west and south, with Russia further west across the Bering Strait...
, at 52°43′27"N 174°07′08"E. It has a land area of 5.903 sq mi (15.289 km²), and is about 1,200 miles (1,900 km) southwest of Anchorage, Alaska
Anchorage, Alaska
Anchorage is a unified home rule municipality in the southcentral part of the U.S. state of Alaska. It is the northernmost major city in the United States...
.

The Russian vessel Saint Peter and Paul wrecked at Shemya in 1762. Most of the crew survived.

A United States Air Force
United States Air Force
The United States Air Force is the aerial warfare service branch of the United States Armed Forces and one of the American uniformed services. Initially part of the United States Army, the USAF was formed as a separate branch of the military on September 18, 1947 under the National Security Act of...
radar
Radar
Radar is an object-detection system which uses radio waves to determine the range, altitude, direction, or speed of objects. It can be used to detect aircraft, ships, spacecraft, guided missiles, motor vehicles, weather formations, and terrain. The radar dish or antenna transmits pulses of radio...
, surveillance, and weather
Weather
Weather is the state of the atmosphere, to the degree that it is hot or cold, wet or dry, calm or stormy, clear or cloudy. Most weather phenomena occur in the troposphere, just below the stratosphere. Weather refers, generally, to day-to-day temperature and precipitation activity, whereas climate...
station and aircraft refueling station, including a 10,000 ft (3 km) long runway, opened on Shemya in 1943 and is still in operation. The station, originally Shemya Air Force Base or Shemya Station, had 1,500 workers at its peak in the 1960s. Observations from Shemya were normally the first radar reports of new Russian satellite launches from Tyuratam (Baikonur) in the early days of satellite tracking; see Project Space Track.

The United States Air Force airborne intelligence platforms "Cobra Ball", "Rivet Amber," and "Rivet Ball" flew intercontinental ballistic missile
Intercontinental ballistic missile
An intercontinental ballistic missile is a ballistic missile with a long range typically designed for nuclear weapons delivery...
tracking flights from this island near the Soviet Union
Soviet Union
The Soviet Union , officially the Union of Soviet Socialist Republics , was a constitutionally socialist state that existed in Eurasia between 1922 and 1991....
, especially the Kamchatka Peninsula
Kamchatka Peninsula
The Kamchatka Peninsula is a peninsula in the Russian Far East, with an area of . It lies between the Pacific Ocean to the east and the Sea of Okhotsk to the west...
, during the height of the Cold War
Cold War
The Cold War was the continuing state from roughly 1946 to 1991 of political conflict, military tension, proxy wars, and economic competition between the Communist World—primarily the Soviet Union and its satellite states and allies—and the powers of the Western world, primarily the United States...
.

The station still operates as a radar station and aircraft refueling station with a staff of about 180 people. The 2000 census
United States Census, 2000
The Twenty-second United States Census, known as Census 2000 and conducted by the Census Bureau, determined the resident population of the United States on April 1, 2000, to be 281,421,906, an increase of 13.2% over the 248,709,873 persons enumerated during the 1990 Census...
reported an official resident population of 27 persons on the island.

Shemya was an important outpost during the Cold War
Cold War
The Cold War was the continuing state from roughly 1946 to 1991 of political conflict, military tension, proxy wars, and economic competition between the Communist World—primarily the Soviet Union and its satellite states and allies—and the powers of the Western world, primarily the United States...
. As part of Project Bluegrass, the White Alice Communications System
White Alice Communications System
The White Alice Communications System was a United States Air Force telecommunication link system constructed in Alaska during the cold war. It featured tropospheric scatter links and line-of-sight microwave radio links...
provided a vital tropospheric scatter
Tropospheric scatter
Tropospheric scatter is a method of transmitting and receiving microwave radio signals over considerable distances – often up to 300 km...
communications link to the mainland during the early-60s to late-70s. Its two 120 ft parabolic reflectors and 50 kW transmitter output bridged the nearly 400 mile gap to Adak, Alaska
Adak, Alaska
Adak , formerly Adak Station, is a city in the Aleutians West Census Area, Alaska, United States. At the 2010 census the population was 326. It is the westernmost municipality in the United States and the southernmost city in Alaska. The city is the former location of the Adak Army Base and Adak...
.

The weather on Shemya is very drastic, though the temperatures only vary between single digits to the mid fifties, and the climate is perhaps the most equatorward low-altitude occurrence of a polar climate (ET) in the world, though it is extremely close to a subpolar oceanic climate (Cfc). The island weather is most likely to be cloudy with a mist and the wind is often in the mid 30s to 40 mph. The Japanese Current in the Pacific to the south of the island regulates the temperature.