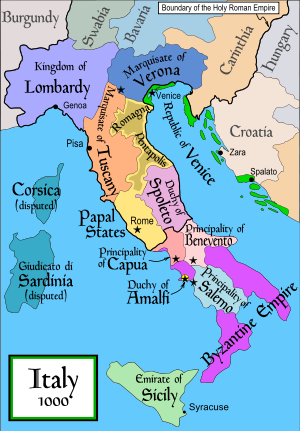 Sergius IV was Duke of Naples from 1002 to 1036. He was one of the prime catalysts in the growth of Norman
Normans
The Normans were the people who gave their name to Normandy, a region in northern France. They were descended from Norse Viking conquerors of the territory and the native population of Frankish and Gallo-Roman stock...
power in the Mezzogiorno
Mezzogiorno
The Midday is a wide definition, without any administrative usage, used to indicate the southern half of the Italian state, encompassing the southern section of the continental Italian Peninsula and the two major islands of Sicily and Sardinia, in addition to a large number of minor islands...
in the first half of the eleventh century. He was nominally a Byzantine
Byzantine Empire
The Byzantine Empire was the Eastern Roman Empire during the periods of Late Antiquity and the Middle Ages, centred on the capital of Constantinople. Known simply as the Roman Empire or Romania to its inhabitants and neighbours, the Empire was the direct continuation of the Ancient Roman State...
vassal
Vassal
A vassal or feudatory is a person who has entered into a mutual obligation to a lord or monarch in the context of the feudal system in medieval Europe. The obligations often included military support and mutual protection, in exchange for certain privileges, usually including the grant of land held...
, like his father before him
John IV of Naples
John IV was the mostly absentee duke of Naples from 997 to after 1002. He was the son and successor of Sergius III. John IV originally recognised the suzerainty of the Byzantine Emperor....
.

In 1024, he submitted to Pilgrim, Archbishop of Cologne
Pilgrim, Archbishop of Cologne
Pilgrim was the archbishop of Cologne and archchancellor of Italy in the Holy Roman Empire, a dignity he obtained for all his successors....
, when the latter was besieging Capua
Capua
Capua is a city and comune in the province of Caserta, Campania, southern Italy, situated 25 km north of Naples, on the northeastern edge of the Campanian plain. Ancient Capua was situated where Santa Maria Capua Vetere is now...
on behalf of Emperor Henry II, though his own duchy was not threatened. By this he acquired a reputation for weakness in the eyes of Prince Pandulf IV of Capua
Pandulf IV of Capua
Pandulf IV was the Prince of Capua on three separate occasions.From February 1016 to 1022 he ruled in association with his cousin Pandulf II. In 1018, the Byzantine catapan Boiannes destroyed the Lombard army of Melus of Bari and his Norman allies at Cannae...
, the Wolf of the Abruzzi, who had been defeated by Pilgrim. In 1026, Pandulf, returned from captivity, besieged his old capital, now ruled by Pandulf V
Pandulf V of Capua
Pandulf V was the count of Teano and prince of Capua . That he was related to the ruling dynasty of Capua seems likely, but is uncertain. He was installed at Capua by Pilgrim, Archbishop of Cologne, who besieged Capua and deposed the current prince, Pandulf IV was imprisoned in Germany...
, the count of Teano
Teano
Teano is a town and comune of Campania, Italy, in the province of Caserta, 30 km north-west of that town on the main line to Rome from Naples. It stands at the south-east foot of an extinct volcano, Rocca Monfina.- Ancient times and Middle Ages:...
. Basil Boiannes, the Greek catapan of Italy, negotiated a surrender and gave Pandulf V safe conduct to Naples, where Sergius offered him asylum. By this, Sergius incurred Pandulf IV's enmity. In the next year (1027), after Sergius' ally Boiannes was recalled, Pandulf attacked Naples and quickly captured it, some say by treachery. Pandulf V fled to Rome
Rome
Rome is the capital of Italy and the country's largest and most populated city and comune, with over 2.7 million residents in . The city is located in the central-western portion of the Italian Peninsula, on the Tiber River within the Lazio region of Italy.Rome's history spans two and a half...
and Sergius went into hiding.

For Sergius, however, fortune reversed itself when Pandulf IV was abandoned by his Norman ally, Rainulf Drengot
Rainulf Drengot
Rainulf Drengot was a Norman adventurer and the first count of Aversa .When one of Rainulf's numerous brothers, Osmond, was exiled by Richard I of Normandy for the murder of one of his kin, Rainulf, Osmond, and their brothers Gilbert Buatère, Asclettin , and Raulf went on a pilgrimage to the...
in 1029. Sergius and the Duke of Gaeta, John V
John V of Gaeta
John V was the consul and duke of Gaeta from 1012 to 1032. He was the son of John IV and Sichelgaita, sister of Sergius IV of Naples. He was either very young when he succeeded his father or perhaps he was even born posthumously.His regency was disputed by Leo, his father's brother, and the...
, sent an embassy to the Norman to ask his assistance in regaining the Neapolitan duchy. With Rainulf's help, Pandulf IV was chased from Naples and Sergius reinstated. Early in 1030, Sergius gave Rainulf the county of Aversa
Aversa
Aversa is a town and comune in the Province of Caserta in Campania southern Italy, about 15 kilometres north of Naples. It is the centre of an agricultural district, the agro aversano, producing wine and cheese...
as a fief, the first Norman principality in the region. Sergius also gave his sister in marriage to the new count.

In 1034, Pandulf IV instigated a revolt in Sorrento
Sorrento
Sorrento is the name of many cities and towns:*Sorrento, Italy*Sorrento, Florida, United States*Sorrento, Louisiana, United States*Sorrento, Maine, United States*Sorrento, Victoria, a township on the Mornington Peninsula, Victoria, Australia...
and annexed it to Capua. In the same year, Sergius' sister died and Rainulf returned to Pandulf's side. Broken in spirit, Sergius retired to a the monastery of the Holy Saviour in insula maris, where the Castello del'Ovo now stands. He was succeeded by his son, John V
John V of Naples
John V was the son and successor of Sergius IV as Duke of Naples from 1034 until his death.In 1034 Pandulf IV of Capua instigated a revolt in Sorrento and annexed it to Capua. In the same year, Sergius IV's sister died and her husband, Rainulf Drengot, returned to Pandulf's allegiance...
. When John went to Constantinople
Constantinople
Constantinople was the capital of the Roman, Eastern Roman, Byzantine, Latin, and Ottoman Empires. Throughout most of the Middle Ages, Constantinople was Europe's largest and wealthiest city.-Names:...
seeking aid from the Byzantines
Byzantine Empire
The Byzantine Empire was the Eastern Roman Empire during the periods of Late Antiquity and the Middle Ages, centred on the capital of Constantinople. Known simply as the Roman Empire or Romania to its inhabitants and neighbours, the Empire was the direct continuation of the Ancient Roman State...
, Sergius briefly came out of retirement to act as regent
Regent
A regent, from the Latin regens "one who reigns", is a person selected to act as head of state because the ruler is a minor, not present, or debilitated. Currently there are only two ruling Regencies in the world, sovereign Liechtenstein and the Malaysian constitutive state of Terengganu...
. On John's return, Sergius returned to his monastery, where he was still living as late as June 1036. He probably died shortly thereafter. His two retirements explain Amatus of Montecassino
Amatus of Montecassino
Amatus of Montecassino , a Benedictine monk at the Abbey of Montecassino is one of three Italo-Norman chroniclers, the others being William of Apulia and Goffredo Malaterra...
's reference to him twice becoming a monk.