Encyclopedia
Seefeld in Tirol is a municipality of the Innsbruck-Land District in the Austria
Austria
Austria , officially the Republic of Austria , is a landlocked country of roughly 8.4 million people in Central Europe. It is bordered by the Czech Republic and Germany to the north, Slovakia and Hungary to the east, Slovenia and Italy to the south, and Switzerland and Liechtenstein to the...
n state of Tyrol
Tyrol (state)
Tyrol is a state or Bundesland, located in the west of Austria. It comprises the Austrian part of the historical region of Tyrol.The state is split into two parts–called North Tyrol and East Tyrol–by a -wide strip of land where the state of Salzburg borders directly on the Italian province of...
, located about 17 kilometres (10.6 mi) northwest of Innsbruck
Innsbruck
- Main sights :- Buildings :*Golden Roof*Kaiserliche Hofburg *Hofkirche with the cenotaph of Maximilian I, Holy Roman Emperor*Altes Landhaus...
. With more than one million overnight stays each year, it is one of the most popular Tyrolean tourist destinations especially for skiing
Skiing
Skiing is a recreational activity using skis as equipment for traveling over snow. Skis are used in conjunction with boots that connect to the ski with use of a binding....
in winter, but also for walking holidays in the summer. 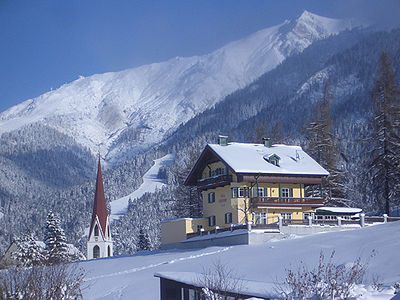 The settlement first documented in 1022 has existed as a farming village for centuries. Tourism began in the early 20th century, but has only grown to its present size since the mid-1970s.

The village is situated on a south-facing plateau north of the River Inn on the watershed between the basins of the Inn and the Isar
Isar
The Isar is a river in Tyrol, Austria and Bavaria, Germany. Its source is in the Karwendel range of the Alps in Tyrol; it enters Germany near Mittenwald, and flows through Bad Tölz, Munich, and Landshut before reaching the Danube near Deggendorf. At 295 km in length, it is the fourth largest river...
. The plateau (which also comprises the villages of Leutasch
Leutasch
Leutasch is a municipality in the northern part of the district Innsbruck-Land and is located approximately 30 km northwest of Innsbruck. The beautiful valley lies within a 16 km long high-lying valley and possesses 2073 inhabitants and 26 hamlets....
and Mösern
Telfs
Telfs is an Austrian market town in the district of Innsbruck-Land and is located 27 km west of Innsbruck. It is the third largest location of Tyrol and received its status in 1908. Telfs possesses an own district court. In the last years Telfs has frequently been increasing in the number of...
) is surrounded by the Wetterstein
Wetterstein
The Wetterstein, is a mountain range in the Northern Limestone Alps. It is a compact range between Garmisch-Partenkirchen, Mittenwald, Seefeld in Tirol and Ehrwald; partially in Bavaria, Germany and partially in Tyrol, Austria...
mountain range to the west, and the Karwendel
Karwendel
The Karwendel is the largest range of the Northern Limestone Alps. Four chains stretch from west to east; in addition, there are a number of fringe ranges and an extensive promontory in the north....
mountain range to the east, it falls away in a steep drop off to the Inn valley to the south. To the north, the high valley leads through the village of Scharnitz
Scharnitz
Scharnitz is a municipality in the district of Innsbruck-Land and is located 16,40 km north of Innsbruck as well as 9 km above Seefeld in Tirol at the border to Germany. It has one of the biggest area size and possesses 12 parts. The village was founded in the early middle age and was once an...
towards the border with Germany
Germany
Germany , officially the Federal Republic of Germany , is a federal parliamentary republic in Europe. The country consists of 16 states while the capital and largest city is Berlin. Germany covers an area of 357,021 km2 and has a largely temperate seasonal climate...
at Mittenwald
Mittenwald
Mittenwald is a German municipality in the district of Garmisch-Partenkirchen, in Bavaria.-Geography:Mittenwald is located approx. 16 kilometers to the south-east of Garmisch-Partenkirchen...
.

Seefeld has two main mountain areas (for walking or skiing) - one is the round hill "Gschwandtkopf" and the other is a series of mountains (known incorrectly as "Roßhütte" after the large mountain restaurant half-way up). These mountains dominate the Seefeld plateau - from left/north to right/south, they are the Seefelderjoch, Seefelderspitze, Härmelekopf and Reitherspitze. Notable other landmarks include the Seekirchl, a small, onion-domed church, and the Pfarrhügel, an extension of the Gschwandtkopf into the town centre forming a small attractive hill. There's also a lake called the Wildsee.

Seefeld is accessible by train on the railway line from Munich
Munich
Munich The city's motto is "" . Before 2006, it was "Weltstadt mit Herz" . Its native name, , is derived from the Old High German Munichen, meaning "by the monks' place". The city's name derives from the monks of the Benedictine order who founded the city; hence the monk depicted on the city's coat...
via Garmisch-Partenkirchen
Garmisch-Partenkirchen
Garmisch-Partenkirchen is a mountain resort town in Bavaria, southern Germany. It is the administrative centre of the district of Garmisch-Partenkirchen, in the Oberbayern region, and the district is on the border with Austria...
to Innsbruck, also served by Intercity-Express (ICE) trains. The Bundesstraße 177 highway to the German border is part of the European route
International E-road network
The international E-road network is a numbering system for roads in Europe developed by the United Nations Economic Commission for Europe . The network is numbered from E 1 up and its roads cross national borders...
E 533.

The alpine skiing
Alpine skiing
Alpine skiing is the sport of sliding down snow-covered hills on skis with fixed-heel bindings. Alpine skiing can be contrasted with skiing using free-heel bindings: Ski mountaineering and nordic skiing – such as cross-country; ski jumping; and Telemark. In competitive alpine skiing races four...
area is small and appropriate for beginners. There are two separate small areas which are not connected except by a ski bus or taxis. The terrain itself is quite good and there is good access to other facilities (walks, shops and the Olympia swimming complex). 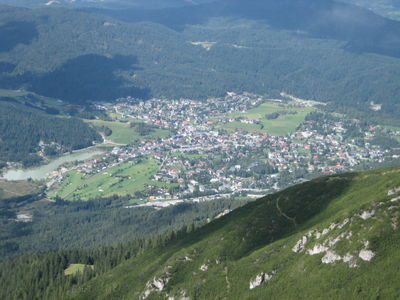 Seefeld is popular with walkers because of its plateau location; there are many attractive walks which don't depend on climbing up and down mountains. However, the walks into the mountains are beautiful too, especially since the Karwendel
Karwendel
The Karwendel is the largest range of the Northern Limestone Alps. Four chains stretch from west to east; in addition, there are a number of fringe ranges and an extensive promontory in the north....
is a huge nature reserve. Recommended walks include down through the Schlossbachklamm to Hochzirl (then the train back), and from the cable car stations down into the Eppzirlertal (if you're fairly fit). There are possibilities for multi-day walks through the Karwendel towards the Achensee
Achensee
The Achensee is a lake north of Jenbach in Tyrol, Austria. It is the largest lake within the federal state, and has a maximal depth of 133 metres. Together with the Achental valley it parts the Karwendel mountain range in the west from the Brandenberg Alps in the east.Water quality is near drinking...
.