Encyclopedia
The Secretary-General to the President (called until 2005 the Secretary to the President) is the senior Irish
Ireland
Ireland is an island to the northwest of continental Europe. It is the third-largest island in Europe and the twentieth-largest island on Earth...
civil servant who both fulfils four distinct roles vis-à-vis the presidency of Ireland
President of Ireland
The President of Ireland is the head of state of Ireland. The President is usually directly elected by the people for seven years, and can be elected for a maximum of two terms. The presidency is largely a ceremonial office, but the President does exercise certain limited powers with absolute...
. Under the Presidential Establishment Act, 1938 and subsequent legislation he or she is

The Secretary's signature is essential for the authentication of the Presidential Seal when affixed to a document executed by the Commission under Seal.


Creation of the office of Secretary to the President 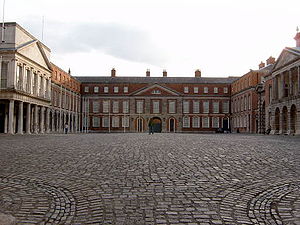 The coming into force of the new Irish constitution, Bunreacht na hÉireann, in December 1937 resulted in the creation of a new office, President of Ireland. While the office was not scheduled to be filled until mid 1938 its powers, functions and duties were required to be exercised immediately. That role was given to the new collective vice-presidency, which under the transitory provisions of the constitution was made up of the Ceann Comhairle
Ceann Comhairle
The Ceann Comhairle is the chairman of Dáil Éireann, the lower house of the Oireachtas of Ireland. The person who holds the position is elected by members of the Dáil from among their number in the first session after each general election...
(speaker) of Dáil Éireann
Dáil Éireann
Dáil Éireann is the lower house, but principal chamber, of the Oireachtas , which also includes the President of Ireland and Seanad Éireann . It is directly elected at least once in every five years under the system of proportional representation by means of the single transferable vote...
, the Chief Justice
Chief Justice of Ireland
The Chief Justice of Ireland is the president of the Supreme Court of Ireland.Under Constitution of Ireland, the Chief Justice of Ireland also occupies several positions ex officio, these include;* A possible judge of the High Court....
and the President of the High Court. (The latter fulfilled the role that would normally be exercised by the Cathaoirleach
Cathaoirleach
Cathaoirleach is the title of the chairman of Seanad Éireann, the sixty-member upper house of the Oireachtas, the legislature of Ireland. The current Cathaoirleach is Senator Paddy Burke...
(chairman) of Seanad Éireann
Seanad Éireann
Seanad Éireann is the upper house of the Oireachtas , which also comprises the President of Ireland and Dáil Éireann . It is commonly called the Seanad or Senate and its members Senators or Seanadóirí . Unlike Dáil Éireann, it is not directly elected but consists of a mixture of members chosen by...
. However the election to the new upper house had yet to take place, so there was no Cathaoirleach.)

The Government immediately appointed as Secretary to the President Michael McDunphy, a controversial, outspoken and temperamental civil servant who had prior to his appointment been Assistant Secretary to the Executive Council, and had once been Secretary to the Provisional Governments of Michael Collins
Michael Collins (Irish leader)
Michael "Mick" Collins was an Irish revolutionary leader, Minister for Finance and Teachta Dála for Cork South in the First Dáil of 1919, Director of Intelligence for the IRA, and member of the Irish delegation during the Anglo-Irish Treaty negotiations. Subsequently, he was both Chairman of the...
and W. T. Cosgrave (January–December 1922) McDunphy, like the Presidential Commission, was originally based in Dublin Castle
Dublin Castle
Dublin Castle off Dame Street, Dublin, Ireland, was until 1922 the fortified seat of British rule in Ireland, and is now a major Irish government complex. Most of it dates from the 18th century, though a castle has stood on the site since the days of King John, the first Lord of Ireland...
until a new presidential residence was chosen. He moved into the new Áras an Uachtaráin
Áras an Uachtaráin
Áras an Uachtaráin , formerly the Viceregal Lodge, is the official residence of the President of Ireland. It is located in the Phoenix Park on the northside of Dublin.-Origins:...
(formerly the Viceregal Lodge) in June 1938.

McDunphy proved to be a difficult and complex Secretary to the President. A passionate believer in structure, he spent his period in office creating numerous rules and regulations. While the first president, the politically inexperienced Douglas Hyde
Douglas Hyde
Douglas Hyde , known as An Craoibhín Aoibhinn , was an Irish scholar of the Irish language who served as the first President of Ireland from 1938 to 1945...
accepted his rules automatically, his successor, the more politically experienced former Tánaiste
Tánaiste
The Tánaiste is the deputy prime minister of Ireland. The current Tánaiste is Eamon Gilmore, TD who was appointed on 9 March 2011.- Origins and etymology :...
, Seán T. O'Kelly
Sean T. O'Kelly
Seán Thomas O'Kelly was the second President of Ireland . He was a member of Dáil Éireann from 1918 until his election as President. During this time he served as Minister for Local Government and Minister for Finance...
, who became president in June 1945, had a more fraught relationship with McDunphy and frequently baulked at following McDunphy's rules.

McDunphy had a long-term impact on the presidency. His 1945 book The President of Ireland: His Powers, Functions & Duties was seen as the bible of the office by those seeking to restrict the post and its occupant. His restrictions, which were viewed as correct (or, if not correct, useful in enabling them to control and restrict presidents) by later civil servants, led President Erskine Childers
Erskine Hamilton Childers
Erskine Hamilton Childers served as the fourth President of Ireland from 1973 until his death in 1974. He was a Teachta Dála from 1938 until 1973...
to accuse one later Secretary to the President of having "the ghost of McDunphy behind you." Mary Robinson as president ditched all of McDunphy's rules and in effect started from scratch. Commentators credited the ditching of McDunphy's rules as a key factor in the rebirth of the office and in its subsequent popularity.


Secretary attached technically to the Department of the Taoiseach


Past Secretaries to the President