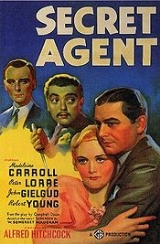 Overview
Secret Agent is a British film
Cinema of the United Kingdom
The United Kingdom has had a major influence on modern cinema. The first moving pictures developed on celluloid film were made in Hyde Park, London in 1889 by William Friese Greene, a British inventor, who patented the process in 1890. It is generally regarded that the British film industry...
directed by Alfred Hitchcock
Alfred Hitchcock
Sir Alfred Joseph Hitchcock, KBE was a British film director and producer. He pioneered many techniques in the suspense and psychological thriller genres. After a successful career in British cinema in both silent films and early talkies, Hitchcock moved to Hollywood...
, loosely based on two stories in Ashenden: Or the British Agent
Ashenden: Or the British Agent
Ashenden: Or the British Agent is a 1928 collection of loosely linked stories by W. Somerset Maugham. It is partly based on the author's experience as a member of British Intelligence in Europe during the First World War.-Plot summary:...
by W. Somerset Maugham
W. Somerset Maugham
William Somerset Maugham , CH was an English playwright, novelist and short story writer. He was among the most popular writers of his era and, reputedly, the highest paid author during the 1930s.-Childhood and education:...
. The film starred John Gielgud
John Gielgud
Sir Arthur John Gielgud, OM, CH was an English actor, director, and producer. A descendant of the renowned Terry acting family, he achieved early international acclaim for his youthful, emotionally expressive Hamlet which broke box office records on Broadway in 1937...
, Peter Lorre
Peter Lorre
Peter Lorre was an Austrian-American actor frequently typecast as a sinister foreigner.He caused an international sensation in 1931 with his portrayal of a serial killer who preys on little girls in the German film M...
, Madeleine Carroll
Madeleine Carroll
Edith Madeleine Carroll was an English actress, popular in the 1930s and 1940s.-Early life:Carroll was born at 32 Herbert Street in West Bromwich, England. She graduated from the University of Birmingham, England with a B.A. degree...
, and Robert Young
Robert Young (actor)
Robert George Young was an American television, film, and radio actor, best known for his leading roles as Jim Anderson, the father of Father Knows Best and as physician Marcus Welby in Marcus Welby, M.D. .-Early life:Born in Chicago, Illinois, Young was the son of an Irish immigrant father...
. Future star Michael Redgrave
Michael Redgrave
Sir Michael Scudamore Redgrave, CBE was an English stage and film actor, director, manager and author.-Youth and education:...
made a brief, uncredited appearance.
Gielgud plays a British
United Kingdom
The United Kingdom of Great Britain and Northern IrelandIn the United Kingdom and Dependencies, other languages have been officially recognised as legitimate autochthonous languages under the European Charter for Regional or Minority Languages...
officer, a famous writer whose death is faked during World War I
World War I
World War I , which was predominantly called the World War or the Great War from its occurrence until 1939, and the First World War or World War I thereafter, was a major war centred in Europe that began on 28 July 1914 and lasted until 11 November 1918...
, and who is sent by the mysterious "R", head of British intelligence, to Switzerland on a secret mission. Carroll plays a female agent who poses as his wife.