Encyclopedia
In some male
Male
Male refers to the biological sex of an organism, or part of an organism, which produces small mobile gametes, called spermatozoa. Each spermatozoon can fuse with a larger female gamete or ovum, in the process of fertilization...
mammal
Mammal
Mammals are members of a class of air-breathing vertebrate animals characterised by the possession of endothermy, hair, three middle ear bones, and mammary glands functional in mothers with young...
s the scrotum is a dual-chambered protuberance of skin
Skin
-Dermis:The dermis is the layer of skin beneath the epidermis that consists of connective tissue and cushions the body from stress and strain. The dermis is tightly connected to the epidermis by a basement membrane. It also harbors many Mechanoreceptors that provide the sense of touch and heat...
and muscle
Muscle
Muscle is a contractile tissue of animals and is derived from the mesodermal layer of embryonic germ cells. Muscle cells contain contractile filaments that move past each other and change the size of the cell. They are classified as skeletal, cardiac, or smooth muscles. Their function is to...
containing the testicle
Testicle
The testicle is the male gonad in animals. Like the ovaries to which they are homologous, testes are components of both the reproductive system and the endocrine system...
s and divided by a septum
Septum
In anatomy, a septum is a wall, dividing a cavity or structure into smaller ones.-In human anatomy:...
. It is an extension of the perineum
Perineum
In human anatomy, the perineum is a region of the body including the perineal body and surrounding structures...
, and is located between the penis
Penis
The penis is a biological feature of male animals including both vertebrates and invertebrates...
and anus
Anus
The anus is an opening at the opposite end of an animal's digestive tract from the mouth. Its function is to control the expulsion of feces, unwanted semi-solid matter produced during digestion, which, depending on the type of animal, may be one or more of: matter which the animal cannot digest,...
. In humans and some other mammals, the base of the scrotum becomes covered with curly pubic hair
Pubic hair
Pubic hair is hair in the frontal genital area, the crotch, and sometimes at the top of the inside of the legs; these areas form the pubic region....
s at puberty
Puberty
Puberty is the process of physical changes by which a child's body matures into an adult body capable of reproduction, as initiated by hormonal signals from the brain to the gonads; the ovaries in a girl, the testes in a boy...
. The scrotum is homologous
Homology (biology)
Homology forms the basis of organization for comparative biology. In 1843, Richard Owen defined homology as "the same organ in different animals under every variety of form and function". Organs as different as a bat's wing, a seal's flipper, a cat's paw and a human hand have a common underlying...
to the labia majora
Labia majora
The labia majora are two prominent longitudinal cutaneous folds that extend downward and backward from the mons pubis to the perineum and form the lateral boundaries of the pudendal cleft, which contains the labia minora, interlabial sulci, clitoral hood, clitoral glans, frenulum clitoridis, the...
in females.

The function of the scrotum appears to be to keep the temperature of the testes slightly lower than that of the rest of the body. For human beings, the temperature should be one or two degrees Celsius below body temperature (around 37 degrees Celsius or 99 degrees Fahrenheit); higher temperatures may be damaging to sperm count. The temperature is controlled by the scrotum moving the testicles closer to the abdomen when the ambient temperature is cold, and further away when it is hot. Moving the testes away from the abdomen and increasing the exposed surface area allow a faster dispersion of excess heat. This is done by means of contraction and relaxation of the cremaster muscle
Cremaster muscle
-Contraction:Its function is to raise and lower the testes in order to regulate the temperature of the testes and promote spermatogenesis. Contraction may also occur during arousal which can prevent injury to the testicles during sex....
in the abdomen and the dartos
Dartos
The dartos fascia is a fat-free layer of smooth muscular fiber outside the external spermatic fascia but below the skin. It is a continuation of Scarpa's fascia, which is a membranous layer of the subcutaneous tissue in the abdominal wall...
fascia (muscular tissue under the skin) in the scrotum

However, this may not be the main function of the scrotum. The volume of sperm produced by the testes is small (0.1-0.2 ml). It has been suggested that if testes were situated within the abdominal cavity that they would be subjected to the regular changes in abdominal pressure that is exerted by the abdominal muscles. This squeezing and relaxing would result in the more rapid emptying of the testes and epididymis of sperm before the spermatozoa
Spermatozoon
A spermatozoon is a motile sperm cell, or moving form of the haploid cell that is the male gamete. A spermatozoon joins an ovum to form a zygote...
were matured sufficiently for fertilization. Some mammals—elephants and marine mammals, for example—do keep their testes within the abdomen and there may be mechanisms to prevent this inadvertent emptying. 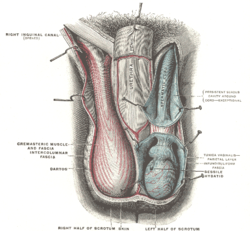 Although the ideal temperature for sperm growth varies between species, it usually appears, in warm-blooded species, to be a bit cooler than internal body temperature, necessitating the scrotum. Since this leaves the testicles vulnerable in many species, there is some debate on the evolutionary advantage of such a system. One theory is that the impregnation of females who are ill is less likely when sperm is highly sensitive to elevated body temperatures. An alternative explanation is to protect the testes from jolts and compressions associated with an active lifestyle. Animals that have stately movements—such as elephants, whales, and marsupial moles—have internal testes and no scrotum.

A study has indicated that use of a laptop computer positioned on the lap can affect sperm production negatively.
A common problem of the scrotum is the development of masses. Common scrotal masses include