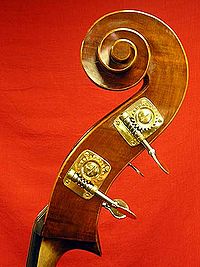 Below the scroll is a hollowed-out compartment (the pegbox
Pegbox
A pegbox is the part of certain stringed musical instruments that houses the tuning pegs....
) through which the tuning pegs pass. The instrument's strings are wound around these pegs. The scroll and pegbox are almost always carved out of one piece of wood.
The source of this article is wikipedia, the free encyclopedia.  The text of this article is licensed under the GFDL.