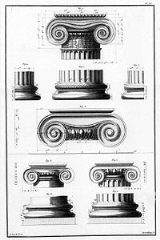 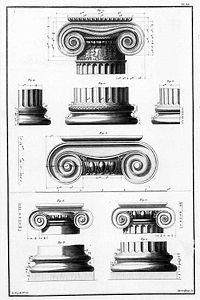 A volute is a spiral scroll-like ornament that forms the basis of the Ionic order
Ionic order
The Ionic order forms one of the three orders or organizational systems of classical architecture, the other two canonic orders being the Doric and the Corinthian...
, found in the capital
Capital (architecture)
In architecture the capital forms the topmost member of a column . It mediates between the column and the load thrusting down upon it, broadening the area of the column's supporting surface...
of the Ionic column. It was later incorporated into Corinthian order
Corinthian order
The Corinthian order is one of the three principal classical orders of ancient Greek and Roman architecture. The other two are the Doric and Ionic. When classical architecture was revived during the Renaissance, two more orders were added to the canon, the Tuscan order and the Composite order...
and Composite
Composite order
The composite order is a mixed order, combining the volutes of the Ionic order capital with the acanthus leaves of the Corinthian order. The composite order volutes are larger, however, and the composite order also has echinus molding with egg-and-dart ornamentation between the volutes...
column capitals. Four are normally to be found on an Ionic capital, eight on Composite capitals and smaller versions (sometimes called helix) on the Corinthian capital.

The word derives from the Latin voluta ("scroll"). It has been suggested that the ornament was inspired by the curve of a ram's horns, or perhaps was derived from the natural spiral of the ovule
Ovule
Ovule means "small egg". In seed plants, the ovule is the structure that gives rise to and contains the female reproductive cells. It consists of three parts: The integument forming its outer layer, the nucellus , and the megaspore-derived female gametophyte in its center...
of a common species of clover
Clover
Clover , or trefoil, is a genus of about 300 species of plants in the leguminous pea family Fabaceae. The genus has a cosmopolitan distribution; the highest diversity is found in the temperate Northern Hemisphere, but many species also occur in South America and Africa, including at high altitudes...
native to Greece
Greece
Greece , officially the Hellenic Republic , and historically Hellas or the Republic of Greece in English, is a country in southeastern Europe....
. Alternatively, it may simply be of geometrical
Geometry
Geometry arose as the field of knowledge dealing with spatial relationships. Geometry was one of the two fields of pre-modern mathematics, the other being the study of numbers ....
origins.

The ornament is used as an element of Renaissance
Renaissance
The Renaissance was a cultural movement that spanned roughly the 14th to the 17th century, beginning in Italy in the Late Middle Ages and later spreading to the rest of Europe. The term is also used more loosely to refer to the historical era, but since the changes of the Renaissance were not...
and Baroque
Baroque
The Baroque is a period and the style that used exaggerated motion and clear, easily interpreted detail to produce drama, tension, exuberance, and grandeur in sculpture, painting, literature, dance, and music...
architecture and is a common decoration in furniture design, silver and ceramics. A method of drawing the complex geometry was devised by the ancient Roman
Ancient Rome
Ancient Rome was a thriving civilization that grew on the Italian Peninsula as early as the 8th century BC. Located along the Mediterranean Sea and centered on the city of Rome, it expanded to one of the largest empires in the ancient world....
architect Vitruvius
Vitruvius
Marcus Vitruvius Pollio was a Roman writer, architect and engineer, active in the 1st century BC. He is best known as the author of the multi-volume work De Architectura ....
from classical buildings and structures.
The source of this article is wikipedia, the free encyclopedia.  The text of this article is licensed under the GFDL.