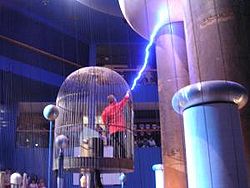 A science museum or a science centre is a museum
Museum
A museum is an institution that cares for a collection of artifacts and other objects of scientific, artistic, cultural, or historical importance and makes them available for public viewing through exhibits that may be permanent or temporary. Most large museums are located in major cities...
devoted primarily to science
Science
Science is a systematic enterprise that builds and organizes knowledge in the form of testable explanations and predictions about the universe...
. Older science museums tended to concentrate on static displays of objects related to natural history
Natural history
Natural history is the scientific research of plants or animals, leaning more towards observational rather than experimental methods of study, and encompasses more research published in magazines than in academic journals. Grouped among the natural sciences, natural history is the systematic study...
, paleontology
Paleontology
Paleontology "old, ancient", ὄν, ὀντ- "being, creature", and λόγος "speech, thought") is the study of prehistoric life. It includes the study of fossils to determine organisms' evolution and interactions with each other and their environments...
, geology
Geology
Geology is the science comprising the study of solid Earth, the rocks of which it is composed, and the processes by which it evolves. Geology gives insight into the history of the Earth, as it provides the primary evidence for plate tectonics, the evolutionary history of life, and past climates...
, industry and industrial machinery, etc. Modern trends in museology
Museology
Museology is the diachronic study of museums and how they have established and developed in their role as an educational mechanism under social and political pressures.-Overview:...
have broadened the range of subject matter and introduced many interactive exhibits. Many if not most modern science museums - which increasingly refer to themselves as 'science centres' or 'discovery centres' - also put much weight on technology
Technology
Technology is the making, usage, and knowledge of tools, machines, techniques, crafts, systems or methods of organization in order to solve a problem or perform a specific function. It can also refer to the collection of such tools, machinery, and procedures. The word technology comes ;...
. One main aspect of science ignored in most museums is the history of the discipline. The search for knowledge is full of trials and errors but science museums hardly ever acknowledge that human frailty and mistakes go along with a history that has lasted centuries.

As early as the Renaissance, many aristocrats collected curiosities for display to their friends. Universities and particularly medical schools also maintained study collections of specimens for their students. Scientists and collectors displayed their finds in private cabinets of curiosities
Cabinet of curiosities
A cabinet of curiosities was an encyclopedic collection in Renaissance Europe of types of objects whose categorical boundaries were yet to be defined. They were also known by various names such as Cabinet of Wonder, and in German Kunstkammer or Wunderkammer...
. Such collections were the predecessors of modern natural history
Natural history
Natural history is the scientific research of plants or animals, leaning more towards observational rather than experimental methods of study, and encompasses more research published in magazines than in academic journals. Grouped among the natural sciences, natural history is the systematic study...
museums. The Utrecht University Museum, among others, still displays an extensive collection of 18th-century animal and human "rarities" in its original setting.

The first science museum was the Museo de Ciencias Naturales
Museo Nacional de Ciencias Naturales
The Museo Nacional de Ciencias Naturales is the National Museum of Natural History of Spain. It is situated in the center of Madrid, by the Paseo de la Castellana. It is managed by the Spanish National Research Council....
, in Madrid
Madrid
Madrid is the capital and largest city of Spain. The population of the city is roughly 3.3 million and the entire population of the Madrid metropolitan area is calculated to be 6.271 million. It is the third largest city in the European Union, after London and Berlin, and its metropolitan...
, Spain
Spain
Spain , officially the Kingdom of Spain languages]] under the European Charter for Regional or Minority Languages. In each of these, Spain's official name is as follows:;;;;;;), is a country and member state of the European Union located in southwestern Europe on the Iberian Peninsula...
. Opened in 1752, it almost disappeared during the Franco
Francisco Franco
Francisco Franco y Bahamonde was a Spanish general, dictator and head of state of Spain from October 1936 , and de facto regent of the nominally restored Kingdom of Spain from 1947 until his death in November, 1975...
regime, but it recovered afterwards and today works closely with the CSIC
CSIC
The Spanish National Research Council is the largest public institution dedicated to research in Spain and the third largest in Europe...
.

Another line in the genealogy of science museums came during the Industrial Revolution
Industrial Revolution
The Industrial Revolution was a period from the 18th to the 19th century where major changes in agriculture, manufacturing, mining, transportation, and technology had a profound effect on the social, economic and cultural conditions of the times...
, with great national exhibits intended to showcase the triumphs of both science and industry. For example, the Great Exhibition in The Crystal Palace
The Crystal Palace
The Crystal Palace was a cast-iron and glass building originally erected in Hyde Park, London, England, to house the Great Exhibition of 1851. More than 14,000 exhibitors from around the world gathered in the Palace's of exhibition space to display examples of the latest technology developed in...
(1851) eventually gave rise to London's Science Museum.

In America
United States
The United States of America is a federal constitutional republic comprising fifty states and a federal district...
, various Natural History Societies established collections in the early 19th century, which evolved into museums. Notable was the early New England Museum of Natural History, (now the Museum of Science
Museum of Science, Boston
The Museum of Science is a Boston, Massachusetts landmark, located in Science Park, a plot of land spanning the Charles River. Along with over 500 interactive exhibits, the Museum features a number of live presentations throughout the building every day, along with shows at the Charles Hayden...
) which opened in Boston
Boston
Boston is the capital of and largest city in Massachusetts, and is one of the oldest cities in the United States. The largest city in New England, Boston is regarded as the unofficial "Capital of New England" for its economic and cultural impact on the entire New England region. The city proper had...
in 1864. The Academy of Science of Saint Louis was founded in 1856 as the first scientific organization west of the Mississippi (although the organization managed scientific collections for several decades a formal museum was not created until the mid-20th century).

The modern interactive science museum appears to have been pioneered by Munich’s Deutsches Museum
Deutsches Museum
The Deutsches Museum in Munich, Germany, is the world's largest museum of technology and science, with approximately 1.5 million visitors per year and about 28,000 exhibited objects from 50 fields of science and technology. The museum was founded on June 28, 1903, at a meeting of the Association...
in the early 20th century. This museum had moving exhibits where visitors were encouraged to push buttons and work levers. The concept was taken to the U.S. by Julius Rosenwald, chairman of Sears, Roebuck and Company, who visited the Deutsches Museum museum with his young son in 1911. He was so-captivated by the experience that he decided to build a similar museum in home town of Chicago
Chicago
Chicago is the largest city in the US state of Illinois. With nearly 2.7 million residents, it is the most populous city in the Midwestern United States and the third most populous in the US, after New York City and Los Angeles...
. Chicago's Museum of Science and Industry
Museum of Science and Industry (Chicago)
The Museum of Science and Industry is located in Chicago, Illinois, USA in Jackson Park, in the Hyde Park neighborhood adjacent to Lake Michigan. It is housed in the former Palace of Fine Arts from the 1893 World's Columbian Exposition...
opened in phases between 1933 and 1940.

In 1959 the Museum of Science and Natural History (now the Saint Louis Science Center) was formally created by the Academy of Science of Saint Louis featuring many interactive science and history exhibits.

Four years after the Exploratorium opened, the first OMNIMAX
IMAX
IMAX is a motion picture film format and a set of proprietary cinema projection standards created by the Canadian company IMAX Corporation. IMAX has the capacity to record and display images of far greater size and resolution than conventional film systems...
theater opened as the Reuben H. Fleet Space Theater and Science Center
Reuben H. Fleet Science Center
The Reuben H. Fleet Science Center is a science museum in Balboa Park in San Diego, California. Established in 1973, it was the first science museum to combine interactive science exhibits with a planetarium and an IMAX Dome theater, setting the standard that most major science museums follow today...
in San Diego's Balboa Park. The tilted-dome Space Theater doubled as a planetarium. The Science Center was an Exploratorium-style museum included as a small part of the complex. This combination interactive science museum, planetarium and OMNIMAX theater set the standard that many major science museums follow today.

As the flavour of interactivity crossed the Atlantic, the massive Cite des Sciences et de l'Industrie opened in Paris in 1986, and smaller but no less influential national centres soon followed in Spain, Finland and Denmark. Their model is emulated around the globe. However, the experimental nature of the Oppenheimer era has long been abandoned in favor of a standardized view of science which favors experimental models as primary exempla. In the UK, the first interactive centres also opened in 1986 on a modest scale, but the real blossoming of science centres was fuelled by Lottery funding for projects to celebrate the millennium.

The mission statements of science centres and modern museums vary. But all are united in being places that make science accessible and encourage the excitement of discovery. They are an integral and dynamic part of the learning environment, promoting exploration from the first 'Eureka!' moment to today's cutting edge research. However, the negative impact of science and technology, or the uneven development of its various disciplines are generally not explored.