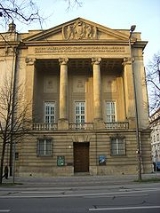 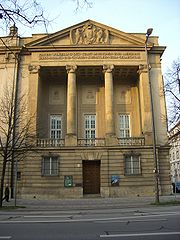 In 1855, Adolf Friedrich von Schack
Adolf Friedrich von Schack
Adolf Friedrich, Graf von Schack was a German poet and historian of literature.-Background:He was born at Brüsewitz near Schwerin. Having studied jurisprudence at the universities of Bonn, Heidelberg and Berlin, he entered the Mecklenburg state service and was subsequently attached to the...
settled at Munich
Munich
Munich The city's motto is "" . Before 2006, it was "Weltstadt mit Herz" . Its native name, , is derived from the Old High German Munichen, meaning "by the monks' place". The city's name derives from the monks of the Benedictine order who founded the city; hence the monk depicted on the city's coat...
, where he was made member of the academy of sciences. Here he began to collect a splendid gallery of pictures, containing masterpieces of Romanticism
Romanticism
Romanticism was an artistic, literary and intellectual movement that originated in the second half of the 18th century in Europe, and gained strength in reaction to the Industrial Revolution...
with painters such as Anselm Feuerbach
Anselm Feuerbach
Anselm Feuerbach was a German painter. He was the leading classicist painter of the German 19th-century school.-Biography:...
, Moritz von Schwind
Moritz von Schwind
thumb|Moritz von Schwind, c. 1860Moritz von Schwind was an Austrian painter, born in Vienna.Moritz von Schwind received rudimentary training and spent a happy and carefree youth in Vienna. Among his companions was the composer Schubert, some of whose songs he illustrated...
, Arnold Böcklin
Arnold Böcklin
Arnold Böcklin was a Swiss symbolist painter.-Life and art:He was born at Basel. His father, Christian Frederick Böcklin , was descended from an old family of Schaffhausen, and engaged in the silk trade. His mother, Ursula Lippe, was a native of the same city...
, Franz von Lenbach
Franz von Lenbach
Franz von Lenbach was a German painter of Realist style.-Biography:Lenbach was born at Schrobenhausen, in Bavaria. His father was a mason, and the boy was intended to follow his father's trade or be a builder. With this view he was sent to school at Landsberg, and then to the polytechnic at Augsburg...
, Carl Spitzweg
Carl Spitzweg
Carl Spitzweg was a German romanticist painter and poet. He is considered to be one of the most important artists of the Biedermeier era....
, Carl Rottmann
Carl Rottmann
Carl Anton Joseph Rottmann was a German landscape painter and the most famous member of the Rottmann family of painters....
, etc., and which, though bequeathed by him to the Emperor William II, still remains at Munich.