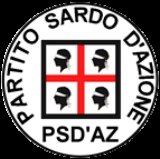 Encyclopedia
The Sardinian Action Party (Partito Sardo d'Azione, PSd'Az) is a regionalist
Regionalism (politics)
Regionalism is a term used in international relations. Regionalism also constitutes one of the three constituents of the international commercial system...
social-democratic
Social democracy
Social democracy is a political ideology of the center-left on the political spectrum. Social democracy is officially a form of evolutionary reformist socialism. It supports class collaboration as the course to achieve socialism...
political party in Sardinia, which has recently sided with The People of Freedom
The People of Freedom
The People of Freedom is a centre-right political party in Italy. With the Democratic Party, it is one of the two major parties of the current Italian party system....
, the largest centre-right party in Italy
Italy
Italy , officially the Italian Republic languages]] under the European Charter for Regional or Minority Languages. In each of these, Italy's official name is as follows:;;;;;;;;), is a unitary parliamentary republic in South-Central Europe. To the north it borders France, Switzerland, Austria and...
.

The party was founded in April 1921 and was re-organized after World War II
World War II
World War II, or the Second World War , was a global conflict lasting from 1939 to 1945, involving most of the world's nations—including all of the great powers—eventually forming two opposing military alliances: the Allies and the Axis...
by Emilio Lussu
Emilio Lussu
Emilio Lussu was an Italian soldier, politician and a writer.-The soldier:Lussu was born in Armungia, province of Cagliari and graduated with a degree in law in 1914...
, secretary for Southern Italy of the Action Party during the war, and other veteran
Veteran
A veteran is a person who has had long service or experience in a particular occupation or field; " A veteran of ..."...
s from the "Sassari brigade
Sassari Mechanized Brigade
* "Sassari" Combat Service Support Battalion in Sassari* 3rd Bersaglieri Regiment in Teulada* 151st Mechanized Infantry Regiment "Sassari" in Cagliari* 152nd Mechanized Infantry Regiment "Sassari" in Sassari* 5th Engineer Regiment in Macomer...
", a social-democratic group of the Italian resistance movement
Italian resistance movement
The Italian resistance is the umbrella term for the various partisan forces formed by pro-Allied Italians during World War II...
. Lussu left the party in 1948 to found the short-lived Sardinian Socialist Action Party
Sardinian Socialist Action Party
The Sardinian Socialist Action Party was a regionalist social-democratic political party active in Sardinia....
, which joined the Italian Socialist Party
Italian Socialist Party
The Italian Socialist Party was a socialist and later social-democratic political party in Italy founded in Genoa in 1892.Once the dominant leftist party in Italy, it was eclipsed in status by the Italian Communist Party following World War II...
in 1949, as many other PSd'Az members did. The two parties won 10.4 and 6.6% respectively in the first regional election in 1949
Sardinian regional election, 1949
The Sardinian regional election of 1949 took place on 8 May 1949.After the election Luigi Crespellani, a Christian Democrat, formed a government with the Sardinian Action Party, a social-democratic regionalist party, that eventually quit the government in 1951.-Results:Sources: and...
.

In the 2004 regional election
Sardinian regional election, 2004
The Sardinian regional election of 2004 took place on 12 -13 June 2004.The election had two main competitors: Mauro Pili for the centre-right and Renato Soru for the centre-left. Soru won easily over Pili, who had been President of the Region from 2001 to 2003...
the PSd'Az won 3.9% of the vote and w regional deputies. The party was part of the centre-left
Centre-left
Centre-left is a political term that describes individuals, political parties or organisations such as think tanks whose ideology lies between the centre and the left on the left-right spectrum...
coalition which governed Sardinia, led by President Renato Soru
Renato Soru
Renato Soru is an Italian entrepreneur, the founder of the internet service company Tiscali, based in Cagliari. He was born in Sanluri, Sardinia....
. In 2007 one of the two regional deputies left the party to join the regional Democratic Party
Democratic Party (Italy)
The Democratic Party is a social-democratic political party in Italy, that is the second-largest in the country. The party is led by Pier Luigi Bersani, who was elected in the 2009 leadership election....
.

In the 2006 general election
Italian general election, 2006
In the Italian general election, 2006 for the renewal of the two Chambers of the Parliament of Italy held on April 9 and April 10, 2006 the incumbent prime minister Silvio Berlusconi, leader of the center-right House of Freedoms, was narrowly defeated by Romano Prodi, leader of the center-left The...
leader Giacomo Sanna, due to an electoral pact named Pact for the Autonomies
Pact for the Autonomies
The Pact for the Autonomies was an alliance formed by the Lega Nord, the Movement for Autonomy and the Sardinian Action Party for the 2006 general election....
, was candidate of Lega Nord for the Senate
Italian Senate
The Senate of the Republic is the upper house of the Italian Parliament. It was established in its current form on 8 May 1948, but previously existed during the Kingdom of Italy as Senato del Regno , itself a continuation of the Senato Subalpino of Sardinia-Piedmont established on 8 May 1848...
in Lombardy
Lombardy
Lombardy is one of the 20 regions of Italy. The capital is Milan. One-sixth of Italy's population lives in Lombardy and about one fifth of Italy's GDP is produced in this region, making it the most populous and richest region in the country and one of the richest in the whole of Europe...
, but failed to get elected. The party ran alone in the 2008 general election, winning only 1.5% in the Region.

For the 2009 regional election
Sardinian regional election, 2009
The Sardinian regional election of 2009 took place on 15-16 February 2009.Ugo Cappellacci, the centre-right candidate, defeated Renato Soru, the centre-left incumbent President, by a large margin and The People of Freedom was by far the largest party...
the party finally chose to join the centre-right coalition in support of Ugo Cappellacci, who defeated Soru. This provoked the split of the left-wing that formed Red Moors
Red Moors
Red Moors is a regionalist social-democratic political party in Sardinia.The party was founded in 2009 as a split from the Sardinian Action Party, after that the latter had signed an electoral pact with The People of Freedom, the main centre-right party in Italy.In the 2009 regional election the...
.

Despite this, in the election the PSd'Az won 4.3% of the vote (having its strongholds in the traditionally left-wing Provinces of Nuoro
Province of Nuoro
The Province of Nuoro is a province in the autonomous island region of Sardinia, Italy. Its capital is the city of Nuoro.It has an area of 3,934 km², and a total population of 161,444. The province is divided into 52 comuni, the largest of which are Nuoro , Siniscola , Macomer , and Dorgali...
and Carbonia-Iglesias
Province of Carbonia-Iglesias
Carbonia-Iglesias is a province in the autonomous region of Sardinia, Italy which includes the historical region of Sulcis-Iglesiente, the southwestern part of Sardinia.-Overview:...
, where it gained 7.5 and 7.1%, respectively) and four regional deputies plus one (Giacomo Sanna) elected in Cappellacci's regional list. The Red Moors won 2.5% and 1 deputy.

The electoral results of PSd'Az in Sardinia from 1946 to 1979 are shown in the table below. In 1961 (regional), 1963 (general) and 1965 (regional) the party formed joint lists with the Italian Republican Party
Italian Republican Party
The Italian Republican Party is a liberal political party in Italy.The PRI is party with old roots that originally took a left-wing position, claiming descent from the political position of Giuseppe Mazzini...
. In the general elections of 1972, 1976 and 1979 did not run lists for the Italian Chamber of Deputies
Italian Chamber of Deputies
The Italian Chamber of Deputies is the lower house of the Parliament of Italy. It has 630 seats, a plurality of which is controlled presently by liberal-conservative party People of Freedom. Twelve deputies represent Italian citizens outside of Italy. Deputies meet in the Palazzo Montecitorio. A...
.


The electoral results of PSd'Az in Sardinia since 1983 are shown in the table below.