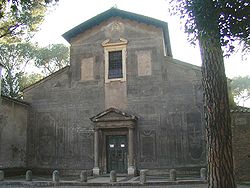 Santi Nereo e Achilleo is a fourth-century basilica
Basilica
The Latin word basilica , was originally used to describe a Roman public building, usually located in the forum of a Roman town. Public basilicas began to appear in Hellenistic cities in the 2nd century BC.The term was also applied to buildings used for religious purposes...
church in Rome
Churches of Rome
There are more than 900 churches in Rome. Most, but not all, of these are Roman Catholic, with some notable Roman Catholic Marian churches.The first churches of Rome originated in places where Christians met. They were divided into three categories:...
, Italy, located in via delle Termi di Caracalla in the rione
Rione
Rione is the name given to a ward in several Italian cities, the best-known of which is Rome. Unlike a quartiere, a rione is usually an official administrative subdivision...
Celio
Celio (rione of Rome)
Celio is the XIXth rione of Rome. Its logo is the bust of an African, with an elephant headdress with golden tusks on a silver background, in memory of an African bust that was found in via Capo d'Africa.- Churches :* San Giovanni a Porta Latina...
facing the main entrance to the Baths of Caracalla
Baths of Caracalla
The Baths of Caracalla in Rome, Italy were Roman public baths, or thermae, built in Rome between AD 212 and 216, during the reign of the Emperor Caracalla.- History :...
. The current Cardinal Priest of the Titulus Ss. Nerei et Achillei is Theodore Edgar McCarrick.

A 337 eptaph inscription in the Basilica di San Paolo fuori le Mura celebrates the late Cinnamius Opas, lector of a church known as Titulus Fasciolae; the name has traditionally been explained as the place where St. Peter lost the foot bandage (fasciola) that wrapped the wounds caused by his chains, on his way to escape the Mamertine Prison
Mamertine Prison
The Mamertine Prison — or Tullianum — was a prison located in the Forum Romanum in Ancient Rome. It was located on the northeastern slope of the Capitoline Hill, facing the Curia and the imperial fora of Nerva, Vespasian, and Augustus...
. In the acts of the synod
Synod
A synod historically is a council of a church, usually convened to decide an issue of doctrine, administration or application. In modern usage, the word often refers to the governing body of a particular church, whether its members are meeting or not...
of Pope Symmachus
Pope Symmachus
Saint Symmachus was pope from 498 to 514. His tenure was marked by a serious schism over who was legitimately elected pope by the citizens of Rome....
, in 499, the Titulus Fasciolae is recorded as served by five priests. This same building is recorded as titulus Sanctorum Nerei et Achillei in 595; therefore the dedications to Sts. Nereus and Achilleus
Saints Nereus and Achilleus, Domitilla and Pancratius
Nereus, Achilleus, Domitilla, and Pancras are martyrs of the Roman Catholic Church.In the General Roman Calendar of 1962, they have a third-class feast on 12 May....
, two soldiers and martyrs of the 4th century, must date to the sixth century.

In 814, Pope Leo III
Pope Leo III
Pope Saint Leo III was Pope from 795 to his death in 816. Protected by Charlemagne from his enemies in Rome, he subsequently strengthened Charlemagne's position by crowning him as Roman Emperor....
rebuilt the old titulus. In the 13th century the relics of the two martyrs were transferred from the Catacomb of Domitilla to the Sant'Adriano, whence they were transferred to this church by Cardinal Baronius.

The church degradated with the time, and in 1320, according to the Catalogue of Turin, it was a presbyterial title with no priest serving. So Pope Sixtus IV
Pope Sixtus IV
Pope Sixtus IV , born Francesco della Rovere, was Pope from 1471 to 1484. His accomplishments as Pope included the establishment of the Sistine Chapel; the group of artists that he brought together introduced the Early Renaissance into Rome with the first masterpiece of the city's new artistic age,...
restored the church in occasion of the Jubilee
Jubilee (Christian)
The concept of the Jubilee is a special year of remission of sins and universal pardon. In the Biblical Book of Leviticus, a Jubilee year is mentioned to occur every fifty years, in which slaves and prisoners would be freed, debts would be forgiven and the mercies of God would be particularly...
of 1475, while the Jubilee of 1600 was the occasion for the last major restoration, funded by the scholarly antiquarian
Antiquarian
An antiquarian or antiquary is an aficionado or student of antiquities or things of the past. More specifically, the term is used for those who study history with particular attention to ancient objects of art or science, archaeological and historic sites, or historic archives and manuscripts...
Cardinal Cesare Baronio, who commissioned the fresco
Fresco
Fresco is any of several related mural painting types, executed on plaster on walls or ceilings. The word fresco comes from the Greek word affresca which derives from the Latin word for "fresh". Frescoes first developed in the ancient world and continued to be popular through the Renaissance...
es.

Behind its unassuming facade the church is built according to the typical basilica plan
Basilica
The Latin word basilica , was originally used to describe a Roman public building, usually located in the forum of a Roman town. Public basilicas began to appear in Hellenistic cities in the 2nd century BC.The term was also applied to buildings used for religious purposes...
, with a single nave and two side aisles. The original columns were replaced in the 15th century by octagonal pillars, and the nave is characterized by the large fresco decorations commissioned by Cardinal Baronio.

The cardinal in his iconographic scheme timed for the 1600 Jubilee emphasized the role of the Roman martyrs during the early centuries of Christianity. The execution of the frescoes were entrusted to a minor painter, generally thought to be Niccolò Circignani, called "Pomarancio"
Niccolò Circignani
Niccolò Circignani was an Italian painter of the late-Renaissance or Mannerist period.Born in Pomarance, he is one of three Italian painters called Pomarancio. His first works are documented from the 1560s, where he painted frescos on the Old Testament stories for the Vatican Belvedere, where he...
. There are a lot of gruesome details and blood all over the walls, but the pastel colours soften somewhat a fearsome effect of the pictures.

The medieval ambo
Pulpit
Pulpit is a speakers' stand in a church. In many Christian churches, there are two speakers' stands at the front of the church. Typically, the one on the left is called the pulpit...
is set on a large, porphyry urn taken from the nearby Baths of Caracalla
Baths of Caracalla
The Baths of Caracalla in Rome, Italy were Roman public baths, or thermae, built in Rome between AD 212 and 216, during the reign of the Emperor Caracalla.- History :...
. The low screen separating the choir is faced with 13th-century Cosmatesque
Cosmatesque
Cosmatesque, or Cosmati, is a style of geometric decorative inlay stonework typical of Medieval Italy, and especially of Rome and its surroundings. It was used most extensively for the decoration of church floors, but was also used to decorate church walls, pulpits, and bishop's thrones...
style inlays. A white marble candelabra has been brought here from San Paolo fuori le Mura. The ciborium
Ciborium (architecture)
In ecclesiastical architecture, a ciborium is a canopy or covering supported by columns, freestanding in the sanctuary, that stands over and covers the altar in a basilica or other church. It may also be known by the more general term of baldachin, though ciborium is often considered more correct...
, dating to the 16th century, is raised on African marble columns.

The spandrels of the arch at the end of the nave retains some of the former mosaics of the time of Leo III, with a central Transfiguration in a mandorla. The high altar, made of three Cosmatesque panels, houses the relics of Nereus, Achilleus, and of St Flavia Domitilla
Flavia Domitilla (saint)
Flavia Domitilla was daughter of Domitilla the Younger by an unknown father, perhaps Quintus Petillius Cerialis. She married her cousin, the consul Titus Flavius Clemens.-In Roman literature:...
; all three of them where brought here from the Catacomb of Domitilla. Next to the altar there are two pagan stones depicting two winged spirits, taken from a nearby temple.

In the apse
Apse
In architecture, the apse is a semicircular recess covered with a hemispherical vault or semi-dome...
behind the altar is the episcopal throne assembled under the direction of the antiquary Cardinal Baronius, reusing lions, in the Cosmatesque style that is associated with the Vassalletto school, which support the armrests; on the backrest is inscribed the opening and closing words of the twenty-eighth homily of St. Gregory the Great
Pope Gregory I
Pope Gregory I , better known in English as Gregory the Great, was pope from 3 September 590 until his death...
, inscribed under the mistaken tradition that he preached them here, in front of the relics of Sts. Nereus and Achilleus on their feast day. When Cardinal Baronio ordered the inscription, he did not know that the relics were originally buried in the underground basilica of the Catacomb of Domitilla, so thought that this was the place St. Gregory preached.

The arch of the apse has mosaics of the 9th century with the Annunciation, the Transfiguration, and the Theotokos (Madonna and child).